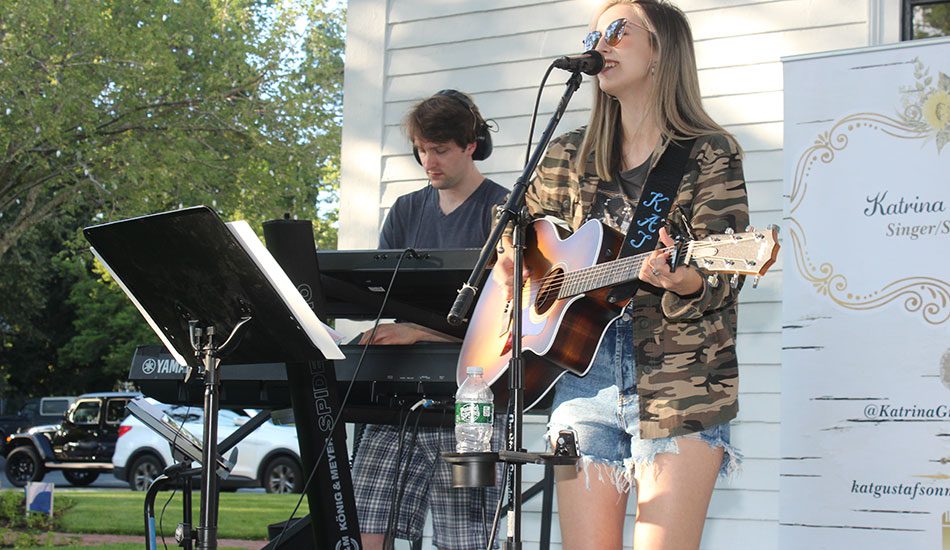 SINGER-SONGWRITER Katrina Gustafson performed a cover of Miranda Lambert’s “Mama’s Broken Heart” in front of a large crowd during Lynnfield Rotary’s Concert on the Common on July 28. (Dan Tomasello Photo)

LYNNFIELD — Music, community spirit and generosity filled the air during Lynnfield Rotary’s last Concert on the Common on July 28.

The Rotary Club was unable to host any concerts last year due to the COVID-19 pandemic. In the wake of the state easing restrictions this spring, Lynnfield Rotary was able to hold two concerts that were huge hits with the community.

Singer-songwriter Katrina Gustafson made her triumphant return to the Concert on the Common. The Lynnfield High School Class of 2016 graduate said it felt great coming back and playing in front of a hometown crowd comprised of 250 attendees. The vocalist and acoustic guitarist was joined on stage by electric guitarist Keith Jacques, bassist Ritchie Sullaway, keyboardist Devereux Geiger and drummer John Repucci. Marc Gustafson, the singer’s dad, served as the concert’s soundman.

“It felt like a reunion,” said Gustafson. “It was great seeing so many familiar faces from town. I loved seeing people dancing, and it was nice being able to hug people again. It was really, really fun coming back and playing.”

Gustafson performed a variety of country songs by Johnny Cash, Dolly Parton, Miranda Lambert, Little Big Town, Taylor Swift and Carrie Underwood during last week’s Concert on the Common. She also performed some original songs that she had written.

“People often want to hear the songs that they know,” said Gustafson. “But it is also good to get yourself out there, so I played a few of my songs and told the stories behind them.”

Gustafson released her new record, “Unspoken,” this past January. After taking a break from music in order to serve as a long-term substitute fourth grade teacher at Huckleberry Hill School from March through June, Gustafson has been promoting the record this summer. Residents can listen to “Unspoken” on streaming services such as iTunes and Spotify. The singer has also been performing gigs around the area this summer, including at 3rd Ave. in Burlington.

“I have been trying to promote my music while performing in order to give people insight about the songs and the stories behind them,” said Gustafson. 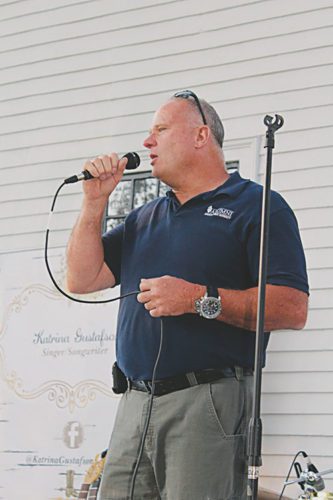 “I am thankful that the veterans got the chance to sing,” said Gustafson.

Lynnfield Rotary President Jack Moynihan was thrilled with the turnout at both concerts. The a cappella group, The Memory Laners, performed at the first Concert on the Common on July 21.

“I loved the concerts,” said Moynihan. “I was pleasantly surprised by the turnout at the July 21 concert and we had a great turnout on July 28. Katrina does a great job. There was a good feeling in the air and we had a great venue. It was like a Hallmark movie.”

The Rotary Club also donated two $2,500 cash prizes to local nurses Andrea Early and Christine Guido as part of a raffle fundraiser. Moynihan said the club created the raffle in order to recognize the medical professionals and first responders who have spent the past year-and-a-half fighting the COVID-19 pandemic.

“Lynnfield Rotary created the raffle in order to honor the first responders, doctors and nurses that have served our communities selflessly over the past year,” said Moynihan. “We are thrilled that two nurses won. They deserve every accolade we could give them.”

“We gave away $5,000 and the balance will go to fight COVID internationally,” said Moynihan. “Rotary International has asked us to support them with fighting COVID in India and Africa. We are going to be supporting community efforts as well.”

Moynihan thanked Lynnfield Rotary Past President Peggy Pratt Calle for “grasping the raffle idea from its inception and spearheading the work” during the transition process.

“We never missed a beat,” said Moynihan. “It was a team effort all the way through.”

Lynnfield Rotary’s Concert on the Common also featured the Tree Committee raising awareness about oak trees and butterflies. Tree Committee member Melanie Lovell dressed up as a squirrel once again for a trivia game that was very popular with the concert’s attendees, particularly children.

“That was a big hit,” said Gustafson.

Moynihan thanked Priestley for bringing back Lynnfield Rotary’s Concert’s on the Common this summer.

“From getting permits to booking entertainers to selling raffle tickets, Bob is instrumental in making sure the concerts are successful not only this year, but every year,” said Priestley.

Priestley is looking forward to the Concerts on the Common returning next year.

“We are looking forward to a full July slate next summer,” said Priestley.