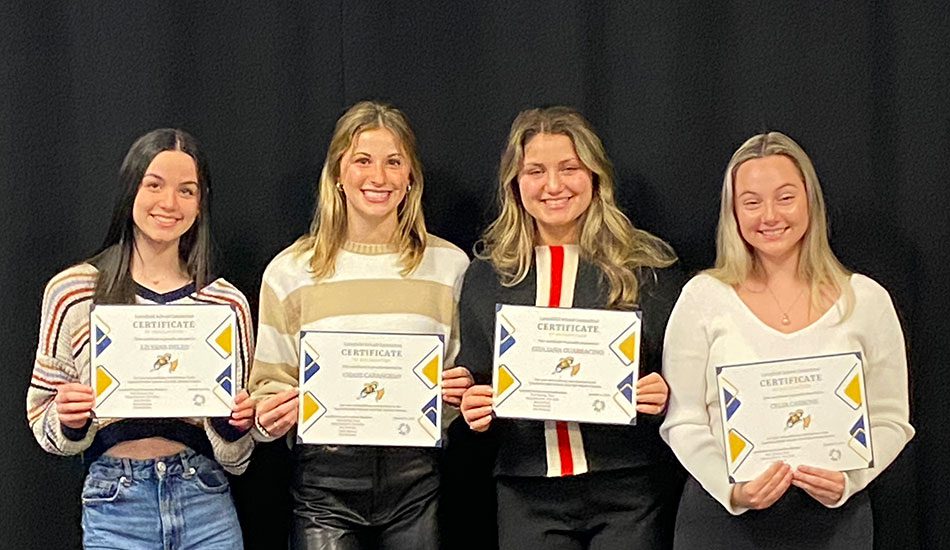 LYNNFIELD — The School Committee honored fall student-athletes for their team and individual accomplishments on the court, field and golf course during a Jan. 10 meeting.

School Committee Chair Rich Sjoberg said it was an honor to recognize the 25 student-athletes for having a great fall sports season. He said the student-athletes’ accomplishments have made the community incredibly proud.

“The fall season was very successful for our athletic teams and individual athletes,” said Sjoberg. “We felt that it was important to recognize their achievements.”

Sjoberg noted that a number of student-athletes were unable to attend the meeting because they were playing winter sports or club sports, but four volleyball players were able to attend: Senior Celia Carbone, senior Giuliana Guarracino, junior Lilyana DeLeo and sophomore Chase Carangelo.

Superintendent Kristen Vogel recalled that the volleyball team advanced to the Division 4 Final Four last November. The second seeded Pioneers fell 3-1 to third seed Joseph Case in the state semifinals. Lynnfield punched its ticket to the Final Four after defeating Nantucket 3-0 in the Elite Eight. The Pioneers concluded the 2022 season with a 20-4 record.

Vogel and the School Committee presented certificates to Celia Carbone, Guarracino, DeLeo and Carangelo. Vogel noted that the entire volleyball team will be receiving certificates as well as three members of the football team who won CAL awards this fall.

Vogel congratulated all 25 student-athletes for being recognized by the CAL, “Boston Globe” and “Boston Herald.”

“We have so many athletes who have done so many wonderful things,” said Vogel.

“I want to congratulate all of our student-athletes,” said Muzio. “Their accomplishments this fall was pretty extensive.”

The meeting’s attendees gave the student-athletes a round of applause.

Sjoberg thanked the student-athletes’ parents for helping them succeed on the court, field and golf course this fall.

“There is no better feeling than pride in your children,” said Sjoberg. “We wanted to recognize their excellence, their hard work and their dedication as successful Lynnfield Pioneers.”