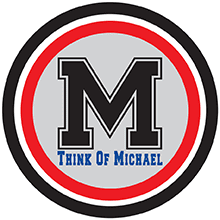 “The proceeds will assist individuals transitioning from treatment to a sober house,” said Carmela. “Some proceeds will also be used for a scholarship for high school students who demonstrate strength and perseverance through any form of adversity, overcome it and grow from it. It will be a great family event that supports a good cause.”

Carmela recalled that Think of Michael held a virtual fundraiser last year after it partnered with Ave Maria Parish. She said Adolescent Faith Formation Coordinator Robyn Yannone proposed that the foundation hold a virtual event because the parish requires teenagers to complete community service hours before they are confirmed.

“Robyn came up with this idea during COVID because it was an opportunity for families to get-together outside while doing something healthy,” said Carmela. “Robyn also thought it would be great to support Think of Michael because it’s a great cause. Families were able to do the virtual event independently and at a convenient time. It required no contact with other families, and it fulfilled kids’ requirement for Confirmation. It’s very exciting to have an actual 5K run and walk this year.”

Think of Michael Treasurer Dick Dalton said the 5K’s registration fee will cost runners and walkers $25 if they register online at https://www.lightboxreg.com/the-think-of-michael-5k?func=&mobile=0 by Thursday, Oct. 21. He said the fee will increase to $35 on Saturday.

Dick said a professional timing company will be keeping track of participants’ times at the 5K.

“The people who are true runners will appreciate that this event will be done professionally,” said Dick. “There is going to be a lot of people walking as well.”

Carmela said the fundraiser will include activities for children as well.

“We will have activities for younger kids such as games and pumpkin decorating,” said Carmela. “It will be a fun time for families.”

Lynnfield resident and Boston Bruins anthem singer Todd Angilly will kick off the Think of Michael 5K by singing the National Anthem.

Dick thanked Yannone and Bossi for helping the Think of Michael’s Board of Directors organize the 5K.

“Robyn and Jamie have been the workhorses behind this,”

said Dick. “They have put in a ton of hours. They have been terrific with bringing this fundraiser together.”

Dick also thanked former School Committee member and local attorney Tim Doyle for the support and guidance he has provided the foundation.

“Tim has organized 5Ks such as the Rotary Club’s Turkey Trot in the past,” said Dick. “He has been a real asset for us and has given us a ton of guidance. He made it a lot easier for a bunch of rookies who have never been involved with planning a 5K before.”

After this weekend’s 5K concludes, Dick said the Think of Michael Foundation will begin preparing for its third Trivia Night fundraiser that will take place this January. The foundation was unable to hold the fundraiser earlier this year due to the COVID-19 pandemic.

“Think of Michael, along with other foundations, will be providing those families with a nice Christmas,” said Dick.