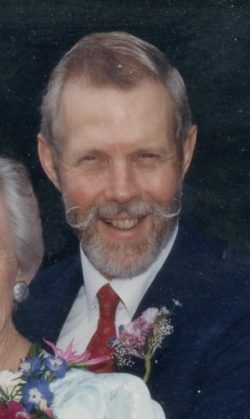 Engineer was a dedicated family man

Born in Hamilton, Ohio on Aug. 21, 1935, George was one of four children of the late George F. and Catherine Rigling Weickert. George was raised in Hamilton, Ohio and received a degree in engineering from General Motors Institute in Flint, Michigan. He moved to Illinois to work at Sundstrand Corporation in Rockford, where he spent nearly his entire engineering career.

His hobbies were fishing, camping, canoeing, leatherwork, square dancing and carpentry. He was a notable bass in the church choir as well.

In addition to his parents, he was preceded in death by his first wife Mary Lou Weickert (Cheney); his youngest son Dennis Weickert; and his granddaughter Jennifer Lynn Brown. George’s siblings JoAnne Fluegeman, James Weickert and Robert Weickert survive him.

He was the beloved husband of Margaret A. Duggan Guilford Weickert. He was the loving father of Michael Weickert and his wife Anita of California; George Weickert III of Colorado; Christopher Weickert and his wife Elaine of Illinois; Margaret “Meg” Soliz and her husband Rene of Illnois; and Mary Brown and her late husband Jeff of Texas. He was the grandfather of Marika, Lisa, Charles, Rachel, Madeline, Hannah, Isaac, Nathaniel, Michaela, Ana, August Lain, Lucas, Kyle, Kiera and Kaite. George’s great-grandchildren Adelaide, Benjamin, Aeris, Ozias, Henry and Saben also survive him. He is also survived by his stepchildren Donald Guildford and his wife Kaye of Florida; Deborah Genestreti and her husband Steven of New Hampshire; and Daniel Guilford and his wife Lynne of Maine.

George’s Funeral Mass will be celebrated in St. Maria Goretti Church, 112 Chestnut St., Lynnfield on Thursday, June 9 at 11 a.m. Visitation for relatives and friends will be held at the church prior to the Mass from 10-11 a.m. Interment will take place at Forest Hill Cemetery, Lynnfield.

In lieu of flowers, donations in George’s name may be made to St. Maria Goretti Church, 112 Chestnut St., Lynnfield, MA 01940.