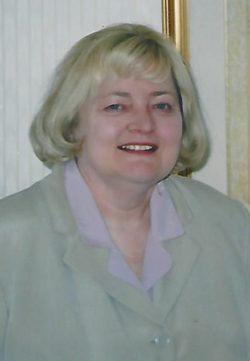 A Funeral Mass was celebrated on March 11, 2022 at Our Lady of the Assumption Church, Lynnfield. Services concluded with interment at Massachusetts National Cemetery in Bourne.

Kerry was born at home in Revere to her late parents, George T. Collins Sr. and the Honorable Katherine E. (Kerrins) Collins. She was one of four children, and had three brothers. She was educated in Revere and was an alumna of Revere High School as a member of the Class of 1961.

Kerry married her husband, Joseph F. Haughney, on Dec. 29, 1971. Early on in Kerry’s career, she began working as a teacher in Revere Public Schools. Due to her husband’s active-duty military status, she and her family later moved to Oklahoma for several years and she taught there. In 1974, Kerry and her family returned home to Revere and Kerry began her 25-year teaching career with the Revere Public Schools. Kerry loved teaching and molding young minds. Kerry and her family enjoyed many summers down at their Cape Cod home in East Sandwich.

Kerry was very proud of her longtime role as a Library Trustee for the Lynnfield Public Library. She was also a member of the Retired Revere Teachers Association. Kerry took a great deal of pride in her family and her home, which she filled with love and happiness. She was very proud of her children and their accomplishments. Kerry also enjoyed hosting her annual “Tea Parties” with over 40 ladies at her home. She was a great collector of fine China and crystal. Her legacy is her children and grandchildren, and her role as an educator went far beyond the classroom.

She was the beloved wife of 50 years to retired USAF Lt. Colonel Joseph F. Haughney of Lynnfield. She was the loving and proud mother of Christine E. Dare–Bryan and her husband, Thomas H., of Larchmont, New York; Jonathan J. Haughney of Seabrook, New Hampshire; and Gretchen B. Haughney of Arlington. She was the cherished grandmother of Henry J., Elisabeth A. and one more grandson on the way. She was the devoted daughter of the late George T. Collins Sr. and the Honorable Katherine E. “Kitty” (Kerrins) Collins. She was the dear sister of the late Attorney Robert F. Collins, Stephen F. Collins and George T. Collins. Several nieces, nephews, grandnieces and grandnephews also lovingly survive her.

The staff at Vertuccio & Smith Home for Funerals is honored to have assisted the family in completing funeral arrangements. To send online condolences, visit www.vertuccioandsmith.com.