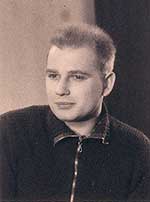 WAKEFIELD — Manfred H. J. “Fred” Dill, 83, a resident of Wakefield and formerly of Hartland, Wis., passed away peacefully at home with his family by his side on Saturday, July 9.

Fred was born in Berlin, Germany, one of two children of the late Hugo M. and Elisabeth (Kutze) Dill. Raised in Berlin under difficult circumstances during World War II, Fred spent some time in England and eventually followed his sister to the United States. He settled in Milwaukee, served in the U.S. Army from 1957 until 1960, and found work as a high school teacher at Milwaukee Technical High School.

He met his future wife Rosemary Brezgal at a Wisconsin lake party, and they were married in 1965. They raised three daughters and numerous cats, dogs, parakeets, ducks and even one goose in Hartland, Wis. and moved to Wakefield more recently to be closer to two of their daughters.

Throughout his life, Fred stayed connected to his German roots with a love for German culture, food, music and drink. He took his family yearly to German Fest, sang in a German choir and returned home to his native Germany frequently. He always maintained a strong relationship with his sister, Irmgard, whom he protected throughout his life.

Fred was passionately involved with a German choir, The Milwaukee Liederkranz, with weekly practices, local concerts and occasional singing competitions in Europe. He loved the outdoors. He enjoyed daily morning walks in area parks, loved attending Shakespeare plays at an outdoor theater and recently fulfilled a lifelong dream of going to Alaska. He had a love for animals, particularly shelties and was especially fond of his former dog Heidi. Fred was a strong, easy going man with a great sense of humor and many funny stories to share.

A family man, he enjoyed many vacations with Rosemary to Cancun and had one memorable drive from Wisconsin to Puerto Vallarta, Mexico. He, along with his wife and three daughters traveled the world together and closer to home loved being on the water sailing on Lake Michigan and more recently spending Thanksgivings on the Cape. With a variety of interests, Fred loved cars, volunteered for Habitat for Humanity, served as a high school chess coach during the week and rooted for the Green Bay Packers on Sundays.

Fred lived a beautiful full life. He traveled the world, ate lots of bratwurst, drank mugs of cold beer, danced the polka and sang his heart out. He was a gentle, kind and loving soul who will be missed immensely.

Fred was the beloved husband of Rosemary (Brezgal) Dill with whom he shared 51 years of marriage. He was the devoted father of Jennifer Nice and her husband Tim of Berkeley, Calif., Laura Dill of Wakefield and Elizabeth Dill and her husband Christopher Rowbottom of Melrose. He was the cherished brother of Irmgard Van Bendegon and her husband Richard of Washington, Utah and loving grandfather of Dylan and William Nice.

Relatives and friends gathered in honor of Manfred for his funeral service at the Robinson Funeral Home, 809 Main St., Melrose, on Thursday, July 14, at 10 a.m. Interment with U.S. Army military honors at Lakeside Cemetery, Wakefield.

Gifts in his memory may be made to the RESPOND Fund #112844650, at the University of Wisconsin Foundation to support animal care. For online tribute, RobinsonFuneralHome.com.