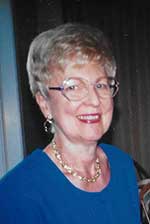 Born in Randolph, VT on September 24, 1932, she was the daughter of the late Arthur and Jesse (Hitchcock) Van Deusen. Marcia was a graduate of South Royalton High School in Vermont and she attended the University of Vermont.

She was a floral designer for Mahoney’s in Winchester and also worked as a shoe sales clerk at Eugene’s of Reading.

Marcia has been a resident of North Reading for sixty years. She was a member of the League of Women Voters for over fifty years and served in many roles including president, mentoring new members and providing candidate’s night for every election. She was a very active member of St. Theresa’s Church. She participated in Bible Study, taught CCD and helped in many outreach programs in- cluding Christ’s Hands. Marcia was a member of the Garden Club and a Girl Scout leader. Marcia loved playing the piano, traveling and gardening. She was a devoted and loving wife, mother and grandmother.

Family members include her loving son, Ralph P. Costanza, Jr. and his wife Susan of Norfolk, MA; daughters, Karen O’Leary and her husband Daniel of Ipswich and Regina Sanfilippo and her husband Salvatore of Irvine, CA; sisters, Myra Berube of TN and Julia Van Deusen of FL; grandchildren, William, Matthew and Christopher Costanza, David and his wife Valerie and Mark and his wife Megan O’Leary, Michael and Leah Sanfilippo; great grandchildren, Mary Grace, Deirdre and Xavier O’Leary; and many nieces and nephews.

Her funeral will be held from the Croswell Funeral Home, 19 Bow Street, North Reading on Saturday, January 14 at 9:15 AM, followed by a 10:30 AM Funeral Mass at St. Theresa’s Church, 63 Winter Street (Rt. 62), North Reading. Calling hours will be held on Friday, January 13, from 4 to 7 PM. Burial will be in Riverside Cemetery in North Reading. Memorial donations may be made in her memory to Alzheimer’s Association, 480 Pleasant St., Watertown, MA 02472. www.croswellfuneralhome.com.