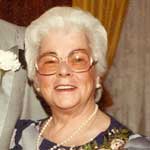 WAKEFIELD — Marjorie J. Quigley, 94, of Wakefield died on Monday, March 9, at her residence.

Born in Everett on Nov. 28, 1920, she was the daughter of the late Frederick and Gertrude B. (Murphy) Sherman.

Mrs. Quigley was raised in Everett and was a graduate of Everett High School, Class of 1938. She had been a resident of Melrose for 45 years. Mrs. Quigley was a member of St. Florence Parish in Wakefield.

She was the wife of the late John E. Quigley. Mrs. Quigley is survived by her two sons; Michael K. Quigley of Florida and Stephen R. Quigley and his wife Shirley of Maine, her three daughters; Barbara A. Johanson and her husband John of Wakefield, M. Susan Clark and her husband Maurice of Vermont and Donna M. Duval of Maine. She is also survived by her 10 grandchildren and nine great-grandchildren. Mrs. Quigley was predeceased by her daughter Karen M. Quigley, her sister Joan Antonnellis and her two brothers; Fred Sherman and William Sherman.

And to use a favorite phrase of Mrs. Quigley: “Enough said.”

A funeral Mass will be celebrated in St. Florence Church, 47 Butler Ave., Wakefield on Thursday at 11 a.m.

Visitation for relatives and friends will be held at the McDonald Funeral Home, 19 Yale Ave., Wakefield prior to the Mass starting at 10 a.m.

Interment will be at Wyoming Cemetery in Melrose.