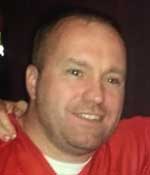 Mark was a graduate of Cararoe Country School in Galway, Ireland. He had worked as a manager at Rent-A-Center in Everett. Mark was a devoted fan of the New England Patriots as well as a soccer fan. He was an outstanding bowler and had a passion for vintage classic cars.

His funeral service will be held in the First Baptist Church, 45 Woburn St., Reading on Tuesday at 11 a.m. Interment to follow at Forest Glade Cemetery in Wakefield. Visitation for relatives and friends will be held at the McDonald Funeral Home, 19 Yale Ave., Wakefield on Monday from 4 to 8 p.m.