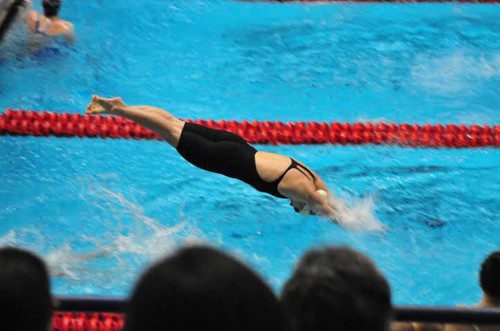 EMILY MEDEIROS, a sophomore, has excelled at Springfield College. The former WMHS standout has qualified for the NCAA Division III Swimming and Diving Championships for the second year in a row.

SPRINGFIELD — Emily Medeiros, a sophomore on the Springfield College women’s swim team, has been making a splash in the pool this year and has come into her own as a New England Women’s and Men’s Athletic Conference (NEWMAC) swimmer.

A second year collegiate athlete, Medeiros knows what to expect week to week, which she has used to her advantage.

As a result, Medeiros, a former Warrior standout, is one of five members of the Springfield College men’s and women’s swimming and diving programs that will represent the Pride at the 2015 NCAA Swimming and Diving Championships at Conroe ISD Natatorium in Shenandoah, Texas from March 18-21.

Medeiros is going to NCAA championships as a result of her performances in the NEWMAC Championships at Worcester Polytechnic Institute (WPI).

A record-setting performance from Medeiros led the Springfield College women’s swimming and diving team in Day 3 of the (NEWMAC) Championships. Medeiros found herself on the first place podium after she had the performance of the night for the Pride. The sophomore not only qualified for the NCAA Championship in the 100 breaststroke but broke the NEWMAC and school record with a time 1:03.78. The previous mark was held by the Pride’s Moira Price ‘09, who posted a 1:03.88 in 2008.

Medeiros added to her weekend accolades as she took the crown in the 200 breaststroke (2:19.49) on the final day of competition.

Since entering Springfield College last year as a freshman, Medeiros has shown her strength in the breaststroke, individual medley and butterfly events. In meets, the former Wakefield Memorial High School standout, has touched first in events such as the 50 and 100-yard breaststroke. She’s shown off some sprint power recently in the 50-yard butterfly for Springfield, touching the wall at 27.96 seconds at a meet against Amherst College on Feb. 1.

As many swimmers know, swimming is a mentally draining sport. As a freshman, Medeiros, like all other first year athletes in the pool, did not know what to expect.

Along with the incredible learning experience that comes along with each passing year, Medeiros has changed her training from last year to this year. She worked on her pulling and freestyle this year which has really helped her personally keep up during freestyle sets that the team does all together.

With her success in the NEWMAC Championships, Medeiros is looking forward to another meet when she goes to the NCAA championships.

Whatever approach Medeiros has taken for the Pride, she has enjoyed great success in the pool the past two years at Springfield College and has the potential for even bigger achievements.