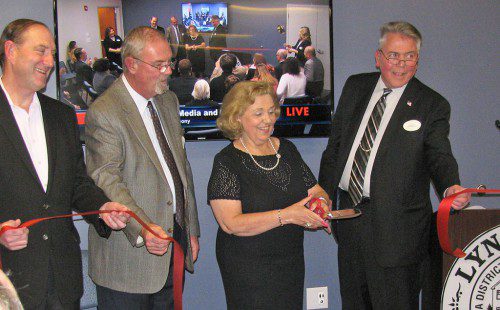 THE VISIONARY leadership provided by the late Al Merritt in the development of MarketStreet was commemorated with the dedication of the Al Merritt Media and Cultural Center Friday night.  Participating in the ribbon cutting were, from left: Ted Tye of National Development, Town Administrator Bill Gustus, Beverly Merritt and Chairman of the Board of Selectmen Dave Nelson.         (Mark Sardella Photo)

LYNNFIELD — Last Friday night, the town of Lynnfield honored the memory of one of its most beloved citizens with the grand opening of the Al Merritt Media and Cultural Center at 682 Market St.

The facility, with a complete TV studio, control room and digital editing suites, will be the new home of “Lynnfield Media,” the town’s cable access operation. The facility also has meeting rooms and will serve as a resource for the schools and the community at large.

In the dozen years after his retirement from a successful career in financial management and before his death last year at age 72, Al Merritt devoted tremendous amounts of his time and energy to serving his community. In addition to overseeing $65 million in upgrades for Lynnfield’s schools, Merritt negotiated on behalf of the town a favorable agreement with National Development on the MarketStreet mixed-use retail, residential and office development, which will net Lynnfield an estimated $1.5 to $2 million in annual tax revenue.

Al Merritt served on the Finance Committee and was twice elected to the Board of Selectman. As chairman of the town’s Economic Development and Housing Advisory Committee, he spearheaded measures to increase Lynnfield’s affordable housing stock in ways that will help protect the town from unwanted 40B projects.

Hundreds of Lynnfield residents and town officials attended last Friday’s event, which was organized by Amber Vaccaro, chairwoman of the Lynnfield Cultural Council. The evening featured a cocktail reception with hors d’oeuvres provided by Davio’s, one of the restaurants in the MarketStreet complex and the national anthem sung by LHS student Katrina Gustafson.

Speaking at the dedication ceremonies, Ted Tye, a managing partner at National Development, which donated the facility, called Merritt “a visionary” and said that MarketStreet as a whole and the Media Center in particular were part of his legacy.

Tye said that he was among a small group who went to visit Merritt just weeks before his passing to show him the plaque that is now mounted at the entrance to the center.

“Al passed away knowing this was going to be here and that it would have his name on it,” Tye said. “One of the things that Al negotiated with us as part of the development agreement was that he wanted a community space for the town of Lynnfield.”

Dave Nelson, Merritt’s colleague on the Board of Selectmen, spoke of Merritt’s successful private sector career including serving as Chief Operating Officer for Liberty Financial Corporation until his retirement in 2001.

Nelson called Merritt, “a man with a good heart and special wisdom to do the right thing.” Nelson said that Merritt’s success was “based on hard work, dedication to the job at hand and a strong spirit of determination.”

“Al Merritt will always be an inspiration to me,” Nelson said.

Lynnfield Town Administrator Bill Gustus said that he and Merritt began talking about combining the cable operation and the community center in the summer of 2012.

“This evening embodies everything that he had hoped for,” Gustus said, “a beautiful, first-class video facility and community space. One thing Al would have been extremely proud of – this entire facility was built with not one tax dollar.”

Before cutting the ribbon to officially open the Al Merritt Media and Cultural Center, Beverly Merritt spoke of her husband’s service to the community that began shortly after they moved to Lynnfield with their five children in 1974.

“We were here about a year when several of our friends approached Al and asked him to be a member of the Finance Committee,” Beverly Merritt said. “That was the beginning of all this volunteer work on many town boards as well as our church, St. Maria Goretti.”

Her husband “loved taking a leadership role,” Beverly said, in what some might characterize as an understatement. She said that his first major project was heading the School Building Committee that oversaw the major upgrade of the town’s educational facilities.

“Several months after that project was completed,” Beverly recalled, “Al was approached to chair the Meadow Walk project.” (The name was eventually changed to “MarketStreet.”)

“We knew that the town needed and would benefit from this major infrastructure,” Beverly said. “The phone never stopped ringing and the meetings at my house were endless.

“He took on this project in the same way he ran his business career,” Beverly said, “non-stop, full speed ahead. His motto was: ‘Lead, follow or get out of my way.’”

At one point, Beverly recalled, her husband turned to her and said, “I can’t believe I’m helping them build another place for you to shop.”

“I am shopping here,” she admitted, “and I know Al is watching me from the gates of heaven.”