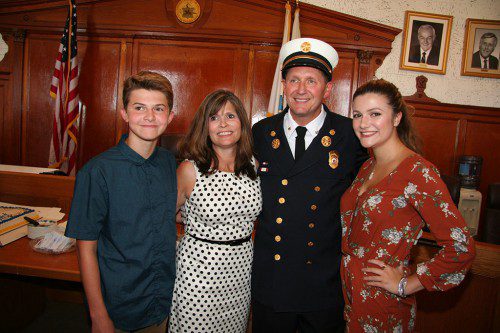 THE BRIGHT FAMILY: Aidan is at the Galvin Middle School, Mary (Chris’ loving and supportive wife), Chris and his daughter Fallon, who is a graduate of WHS Class of 2016 and headed to U of Maine this fall. (Photo supplied by Susan Chanley)

WAKEFIELD — The Governor’s Medal of Valor. The honor has a nice ring to it, doesn’t it?

In November 2015, a man from Wakefield was singled out to receive this coveted award from Governor Charlie Baker at a special ceremony held at the State House in Boston. His name is Christopher Bright, and he lives on the West Side of town.

Nancy Bertrand, owner of Un-Common Antiques & Collectibles on Main Street and Wakefield’s historian, told us that Bright is “such a nice, nice man” and his story so heroic that readers of the Daily Item should know about it. We agreed that this unsung Wakefield hero deserved a spot on Page 1.

Bright, a Revere firefighter then in his thirty-second year with the department, met with Gov. Baker last November to receive the Medal of Valor for his courageous efforts in saving a man’s life when a fire broke out at a two-family home on Reservoir Street in Revere.

The irony in Bright’s heroic story is that the fire that claimed one man’s life and spared the life of another took place inside the family home where Bright grew up. And the second man — the one Bright saved from certain death when he pulled his body out of a smoke-filled room to safety — was none other than his uncle Robert Bright, age 77. The lives of four other people living on the second floor also were saved. Regretfully, Dennis Bright, age 85, Bright’s other uncle, perished in the fire.

Bright recalled the tragic scene that early frigid February morning in 2014 when he saved one life and witnessed the end of another.

“At first, our unit thought the call was for a fire at 77 Reservoir St., but when we arrived at the scene around 5:30 a.m., we found a fully engaged fire at 79 Reservoir St. — the home where I grew up and where two of my uncles were still living,” he said, pausing to collect his emotions.

Bright recalled that the winter of 2014 was particularly severe.

“Snowbanks were at least six feet high. Temperatures were way below normal,” Bright said. “The fire was off Broadway and three-alarm plus. We had a frozen hydrant to deal with and ended up having to pump water from a quarter mile away.”

To this day, Bright has no idea how his uncle Bobby survived.

“The door to his room was unlocked, and I heard his voice. Though there was smoke all around, I found him and managed to pull him out of there,” he said.

For his efforts, he also was honored as Firefighter of the Year by now retired Fire Chief Eugene Doherty.

But Bright’s story does not end there. This past June, after serving 33 years on the Revere Fire Department, he received a third honor when he was appointed Fire Chief.

Like Wakefield’s Fire Chief Michael Sullivan, Bright is loyal to his staff, has a good sense of humor, is committed to public safety and, quite possibly even more important, understands the importance of leaving his ego at home.

Until the time of the fire that stole his uncle’s life, Bright had led a life dominated by academics, family and career. He moved from Revere to Wakefield 23 years ago with his wife Mary and two children. Fallon, his daughter, graduated from Wakefield Memorial High School in 2016. Aidan, his son, is a grade 8 student at the Galvin Middle School. (He also is one of the Daily Item deliverers.)

Following graduation from Revere High School in 1979, Bright’s father, also a firefighter, urged him to take the Civil Service exam and he did, passing with flying colors. (His cousin Billy Bright, now retired, also was a firefighter.)

Bright then continued to follow his chosen career path by enrolling in Suffolk University. On graduation in 1985, he earned a bachelor of science degree in public administration. He then went on to earn his juris doctorate from the New England School of Law in 1990.

After being appointed to the Civil Service permanent reserve list in 1984 and as a permanent firefighter in February 1986, Bright served the city of Revere for 32 years before he was appointed Fire Chief this year.

Bright said he believes that the combination of his education, job performance and experience were the likely factors that led to his promotion. In addition, he also tries to be caring, compassionate and empathic with everyone he meets. Humility, he said, is one of the top character traits needed for the job he now holds.

“I believe I inherited these traits from my mother Katherine,” he said.

The position of Fire Chief does not come without challenges. As is the case in most Fire Departments across the state, short staffing is a crucial issue in Revere. When Bright started his career in 1986, there were 146 firefighters on staff.

“Today, we’re budgeted for 100 firefighters,” he said. “We’ve been doing more with less year after year, and we’re operating on an extremely lean budget.”

Bright added that Fire Departments need to find ways to increase staffing levels to efficiently and effectively protect and provide the services citizens need and deserve.

But staffing is only one issue of many. Another of Bright’s current challenges are the preparations underway for opening a combined dispatch 911 call center between the Police and Fire departments in Revere and Winthrop.

“When this challenge is completed and the call center finally opens, four firefighting positions will open up in my department,” he said. “The four people manning these positions are currently dispatching in fire alarm and will return to firefighting duty. This will help with the staffing issue.”

On the job, Bright said he leads by example, just as his father did.

“I’m a strong proponent of teamwork, which is essential in the fire service,” he commented. “My members know I’m the type of person who sets the bar high.”

As a consequence, Bright expects the same from the members of his department.

“I try to encourage and praise my members accordingly and try not to micro-manage them or get in their way,” he explained.

Instead of hovering over his staff, Bright said he focuses on the big picture and his own responsibilities, including budgeting, personnel matters and strategic long-range planning and goals, all while ensuring the safety of the city’s citizens and firefighters.

The camaraderie Bright enjoys with his staff does not end in Revere.

“I enjoyed working with my father and cousin when we were all on the job together,” Bright said. “However, I’m friendly with firefighters in Wakefield who either work for the town or for one of the other local Fire Departments. I know we have a first-class Fire Department right here in Wakefield, and we’re fortunate to have Chief Sullivan in charge.”

When it comes to his personal life, Bright brings the same traits he displays at work into his home. He is a firm believer in balancing his work responsibilities with the time he spends with family and friends, and he finds solace in good books, jazz and other music genres.

“It’s really about balance,” he said. “It’s what we should all strive for. That, and being the best we can be at home and on the job.”