Melrose cast away by Fishermen in hoop tourney loss 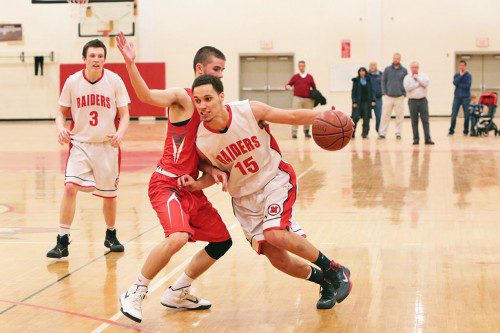 ANTHONY GILARDI and Colby Andrews (#3) helped fuel a must-win over Wakefield last week that lifted the Melrose Red Raider hoop team to playoffs. But on Monday, the Raiders fell to Gloucester in the first round of the Div. 2 North playoffs. (Donna Larsson photo)

MELROSE — When you’re hot, you’re hot. Unfortunately for the MHS Red Raider hoop team, their opponents were hot on Monday night at Gloucester High School in the opening round of the MIAA Division 2 North playoffs. Aided by an avalanche of Gloucester three pointers (12 in total, 7 from senior Drew Muniz) Melrose suffered a 69-58 loss in front of a jubilant Cape Ann crowd. The Raiders end their season at 9-12 overall while Gloucester (12-9) will advance to play Tewksbury Friday night.

Raider head coach Mike Kasprzak noted the sharp-shooting efforts of Gloucester. “We seemed to have trouble matching their intensity. They shot almost 65 percent from the floor. And it’s tough to beat a team shooting like that at home. But we contributed to our situation, more turnovers than assists, missed free throws and we didn’t execute defensively to start the game. We knew the game plan but didn’t execute it.” Still, the coach can only salute the team for earning a league title, their third in four years. “We’ve kept the program in a good place. If not for an an injury last season we’d be league champs four years straight.”

The Raiders only held one lead in the game, in the opening minute of play when both teams battled in a gridlock until Melrose’s Andrews hit a foul shot to give Melrose a 1-0 lead. The Raiders wouldn’t score again until there was 3 minutes left in the first (an Andrews layup) thanks to a series of turnovers which led to a one-man-show performed by Gloucester senior captain Drew Muniz, who drained the first of his seven three-pointers. By the end of the first period, Melrose faced a 12-5 deficit.

Melrose sophomore T’Mahri Mercer had a hot second period with back-to-back baskets but the Raiders still faced the unlikely barrage of treys from Muniz, three in a row coupled with two more from his teammates that temporarily put the game out of Melrose’s hands at 23-11. Red Raider Julian Nyland hit back-to-back shots with a nice assist from Mercer to narrow the gap at 24-17 while Gloucester began a series of traveling calls against them. Melrose’s Colby Andrews came back into the game in a big stretch toward halftime with a series of baskets, along with Nyland, and that helped Melrose keep the damage at seven with a 30-23 deficit at the half. At the break Julian Nyland had six points for Melrose and Andrews 11, including shooting 4-5 on the foul line.

After halftime, Melrose made their strongest run of the game when Anthony Gilardi and Julian Nyland (with a trey) made it a 31-29 game, bringing new life to the floor. However, two turnovers gave the Fisherman room to cause more damage as Muniz continued two more treys. By the end of the third, Gloucester held a healthy 11 point lead over the Raiders, 46-35.

Gloucester would not lose the lead despite Gilardi, Andrews and Mercer answering with baskets. But a flawless performance on the foul line helped Gloucester take leads of 56-45, 62-48 in the final minutes of the game. Melrose’s Nyland hit an impressive three in the final seconds of the game but unfortunately for Melrose the damage was done, 69-58, and in a blink, their postseason over. When the dust settled, half of Gloucester’s points were earned with three pointers.

After the game Melrose head coach Mike Kasprzak commented on his team’s efforts. “We spoke as a team and the attitude was reflective of the fact that we rose to the occasion in the Wakefield game and shared the M.L. Freedom Championship. We’re very proud of them.”

As for next season? “We’re young with some talent coming back and very excited. We wish our seniors well.”