Starts season off with a 2-1 opening day win 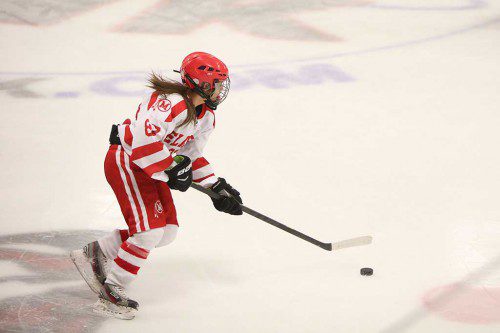 THE MHS girls’ hockey team opened their season with a win over Peabody/Lynnfield. Pictured is Rachel DiFraia (file photo).

MELROSE — After another winning season last winter, the Melrose Lady Raider hockey team returns to the ice hoping to produce another playoff-bound season under the guidance of returning head coach Samantha Tetreau.

Last year Melrose enjoyed a 12-9-0 season, once again punching a ticket to playoffs, a common occurrence since the team’s incarnation several years back. There is no reason to believe that should change this year, particular with Melrose’s balanced offense and defense.

“Last year was a great season,” says Tetreau. “We kept the top teams in the state to close games,  tightened up our defense and created solid offense.”

Sophomore Courtney O’Connor returned to net duty after a strong debut season at goalie. “She played a great game. Without her, we wouldn’t be the team that we are. We rely on her a lot and she has risen to the challenge,” says the coach.

Melrose was down 1-0 going into the third period until Shields scored first halfway through the third to tie it up (assists by Emma Sikora and Linnea Kelley.) “We went with our momentum and kept pounding the net,” said Tetreau. “We had trouble getting the puck to the net in the first two periods. Our game-winning goal was hard fought.” Julia McLaughlin scored the second goal on an assist by Anna McCluskey and Rachel DiFraia.

On defense, Sydney Kroon played her varsity game, and according to her coach, rose to the challenge. “She had great positioning and helped keep the puck out of our D zone. Overall, we had a rocky start and are still getting use to each other. We were happy to come out with a win but are looking to elevate our level of play.”

While Melrose graduated some talented seniors, they remain unique in nature: a relatively youthful team with playoff experience. One returning player they may have to do without is the injured Sam Kroon, who could be out most of the season. But they will be led by tri-captains, senior Julia McLaughlin (second year captain, wing) Junior Rachel DiFraia, center (second year captain) and junior captain Jill Mercer (defender.) According to the coach, all three players are critical part to our team’s success. “Rachel was our leading scorer last year. She brings our team up to the level that they need to be playing.”

McLaughlin, meanwhile, brings a lot of intelligence to the ice. “Julia is one of the smartest players on our team,” says Tetreau. “She supports the puck and is always on her game.”

Mercer, the coach contends, sees the ice. “Her ability to read plays and finesse as a skater are second to none.”

Other key returnees include junior Saoirse Connolly, a defender and sometime forward who scored 8 goals and 13 assists last year. “She brings a level of intensity to our team that we need in order to succeed,” says the coach.

Tetreau expects Melrose to thrive in the always-competitive Middlesex Freedom League. Teams to look out for in the large division include Reading, Woburn, Arlington and Lexington. But this seasoned Melrose team is ready to continue to win when they travel to Arlington on Saturday for a 7:00 p.m. game.

Says Tetreau, “The support and camaraderie is impressive. I really thank the upperclassmen for welcoming the underclassmen and showing them how we work on this team. We have the same goal as we do every year which is to better ourselves over the year and make the tournament.”