This is another in a series of “Around Town” articles.

MELROSE — On November 3 from 1 – 5 p.m. the Melrose High School “iRaiders” Robotics team will hold its 12th Annual Kitchen Tour. One of those annual events special to Melrose, the Kitchen Tour raises funds to support the team and is a fantastic opportunity for locals to view newly renovated kitchens and talk with homeowners, architects, contractors and designers.

Tickets for the kitchen tour are $25 and can be purchased at www.melrosekitchentour.org or exclusively at Buckalew’s General Store, Leading Edge Real Estate, Brad Hutchinson Real Estate or Bravo Kitchens.

Although, you may have seen their robots in action at the Victorian Fair, the Weekly News caught up with members of the team to discuss their interest in science and engineering. Joining students Luke Hoffmann, Joseph D’Innocenzo, Dara Casey and Evan Vogan were faculty mentor Betsy Giovanardi and parent Jen Vogan. 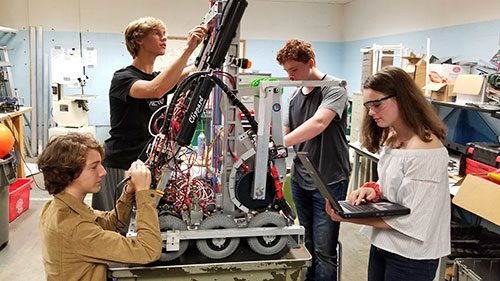 THE 12TH ANNUAL Melrose Kitchen Tour is taking place on November 3 and is a fundraiser for the Robotics Team. Pictured from left: Luke Hoffmann, Evan Vogan, Joseph D’Innocenzo and Dara Casey – Melrose High School Robotics team working on one of the robots the team built last year. (Mike Anderson Photo)

Evan: A very practical answer is that it’s the only thing the school offers where I can get a lot of exposure to engineering. There’s nothing else really like it.

Dara: It’s creating a scenario that is very like something that will get you into the workforce. Because you have different types of people coming together, you have to learn how to communicate with each other’s sub-systems. But it’s great skills, building teamwork, and learning how to communicate.

Do your classmates know what you are doing?

Luke: I’m not sure they do. It’s a huge time commitment – after school, some nights and weekends. It takes a lot of discipline, a lot of effort. I like to build things and the team gives me the tools and the resources to do that.

How did you get involved with robotics?

Luke: I first did robotics in the sixth grade in a private all-school team that one of my friends was running.

Joe: I’ve been with this in some form since 3rd grade. Liked it and just kept doing it.

Evan: With me it’s very similar, I first did robotics as an elementary schooler. When I got to high school I heard about the team and signed up.

There was a time when the notion that girls were not suited for mathematics and other S.T.E.M. fields was accepted orthodoxy. Now, we know that is so not true.

Dara: There’s a lot of interest out there. Women across the board are leading in these fields. For me it’s robotics.

How many girls are on the Robotics team?

Does the team work on one individual project or do you break it up?

Dara: We all are in different sub-systems for one project. So there’s electrical, software, public relations and mechanical. So the girls are disbursed evenly across these sub-systems.

And the team competes against other schools throughout the school year?

So how does the competition work?

Dara: The week of January 4 is kick-off week. Every school, every team competing are given a challenge based on certain parameters for that year. How we meet that challenge depends on how the robot we design performs.

In addition to your homeowners you have a number of local sponsors of the Kitchen Tour.

Vogan: We are fortunate to have so many supporters and corporate sponsors that have really taken an interest in the kids.

Giovanardi: When the team builds their robots they can’t always fabricate every piece. The sheet metal contractor Churchill Corporation, on Franklin Street, is a huge supporter. The team couldn’t compete without their willingness to fabricate some of the parts that we don’t have the equipment for. Churchill has been a good friend.

Vogan: We have some big corporate sponsors that support the team such as Raytheon, Sales Force and BAE Systems. And then there is the kitchen tour.

Not that it should be about competition, but that’s part of it. So how does Melrose hold up?

Evan: We have received a few awards but I would say that we are a solid team of individuals that love the science. There are 20 to 40 teams at a given competition throughout New England and we are squarely right in the middle.

Giovanardi: We should give the team a little more credit. There are a lot of rounds of competition matches and there are also awards being given out for a variety of reasons. Melrose has never, not won at least one of those.

Joe: Last year we received an award for our business plan.

So you have to come up with a business plan for robotics?

Evan: Yes. At the end of the day we need to account for our project cost.

And you have a public relations aspect to all of this too?

So they might know nothing about robots? Or have any engineering aptitude? But they’re really good at public relations or business planning and think robots are cool.

Dara: That’s right. Not only does the team compete on the science but also business and communications skills.

Luke: And they can join the team.

Dara: It’s a great way if you have friends on the team and you would like to bring your skill set help the team compete.

Where are your competitions this year?

Luke: We’ll be going to the competition at Reading High School for sure. Last year we went to the one in Shrewsbury as well.