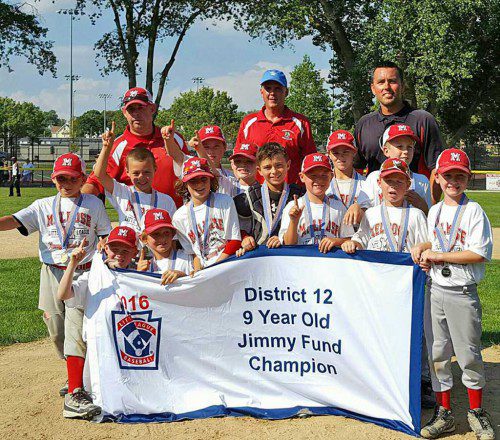 In the 9-year-old championship game Melrose (9-1) faced off against Brookline Little League (8-2). This was the third game this summer between these two talented young baseball teams, with each team earning a one run victory over the other during the tournament.

Saturday’s championship game was no different as this was a tight, well played game with lots of scoring by each team. Melrose was able to pull ahead late in the game, scoring 10 runs over the final two innings to earn an 19-11 victory to earn the District 12 9-year-old title, its ninth consecutive win this summer.

Melrose featured a deep team with hitting, speed, pitching and defense up and down its line up. Melrose’s pitching staff was led all summer long by Colin Walsh, Michael Thomas, Quinn Mathews and Matthew Palmer. Standout catcher Dylan Harrington anchored the team’s defense, logging many hot innings behind the plate during its 10 games. Defensive stalwarts Brendan Doyle, Timmy Rosell, Cavan O’Leary and Quinn Fogarty made many memorable plays. Speedsters Brandon Ward, John Burke, John Recinito and Charlie Keefe used their hitting and running ability to wreak havoc on the base baths.

Each member of this team contributed key hits and defense throughout the summer to help bring a championship to Melrose Little League. The future is bright for Melrose baseball with this talented, hard working, fun loving group of ball players. 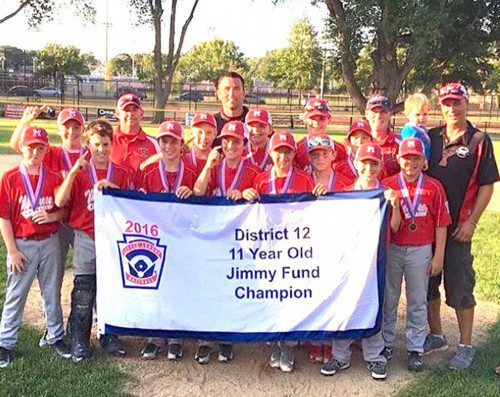 In the 11-year-old championship game Melrose (9-1) renewed its friendly rivalry with Everett Little League (6-4). Earlier in the tournament, Everett handed Melrose its only loss and Melrose was eager to earn its third win over Everett on this day.

As it has all season long, Melrose used its balanced attack, getting hitting and defensive contributions from each member of their roster.

Ace pitcher Gavin Donohue was dealing from the start, using a mixture of blazing fastballs and skillfully timed off-speed pitches to hold Everett in check over five innings.

Melrose built an early six run lead and weathered a fierce Everett comeback in the sixth inning. Ronan Donohue relieved his brother Gavin and recorded the final out of the game via strikeout to secure the 11-year-old title for Melrose, sparking an on field celebration.

Melrose was led all summer by the pitching of Gavin and Ronan Donohue and also by flame thrower Jack Merullo. The hitting stars are too many to mention as the Melrose order hit from top to bottom and seven different players blasted home runs over the fence during the course its 10 games.

CJ Moriconi and Jack Lavery each added walk off hits to win games for Melrose. Sean Thomas and Ryan McGuinness both patrolled second base all summer and each contributed with key hits in a number of games.

Melrose’s outfield was manned by Zack Federico, Patrick Cotter and Will Dugan, where all contributed with key plays both on defense and offense to help make the team such a tough, balanced team to play against.

It was a great effort by a great team, the memories of this summer will last a long time for all involved.

Melrose Little League wants to thank Soc’s Ice Cream for its generosity when hosting MLL’s fundraising event on Aug. 5. Melrose also thanks the Melrose Family YMCA for letting the teams set up a lemonade stand in front of the Y on Thursday, July 28. Lastly, the ball players and coaches want to thank their families, friends and the Melrose community for making their fundraising events such a success and for all the kind words and support they received all summer long.