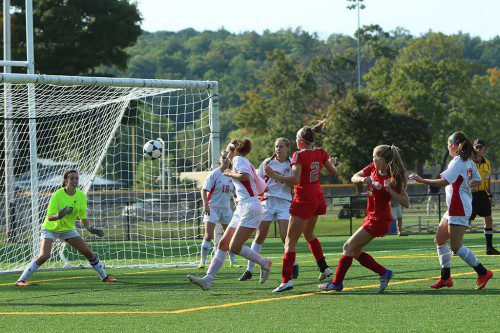 THE MELROSE High girls’ soccer team had a successful week, including a 6-0 shutout over Watertown. (Donna Larsson photo)

MELROSE — The Melrose High girls’ soccer team saw an offensive spark on Tuesday that gave them their first win of the season, a 6-0 shutout over Watertown at Pine Banks Park.

Melrose relied on an array of scorers, including three freshmen, in their victory, while keepers Shannon Jones and Jill Stone shared a shutout at the net.

“The team played well, and did what they had to do,” said coach Bill DeSimone. “It is what it is, a win. They’re young but I’m happy how this team is developing.”

It’s been an overall good week for Melrose, who remained unbeaten after fighting to two ties last week in a back-to-back efforts that earned them more points toward playoff contention. That included a 1-1 draw against Wakefield (0-3-3) on Sept. 23 at Pine Banks in Melrose, and just a day later on Saturday, a 1-1 draw against Malden.

Against the Warriors, Melrose’ lone score came courtesy of Anne Morrison while while Wakefield’s Caroline Hurley contributed for Wakefield.

An all league defender, Morrison has played solidly, according to Melrose head coach Bill DeSimone. “She has really stepped it up for us and is playing well. That was a big moment on Friday. She wasn’t going to be denied.”

Another highlight of their early season has been their midfield efforts from Lily Cunningham, Kiera Sixsmith and Peri MacDonald. Says the coach, “I expect good things from them in the second half.” At the net, Shannon Jones kept Melrose tight in both the Malden and Wakefield contests.

As they season progresses DeSimone is focused on the development of soccer IQ. “We need to develop and improve on ball skills and first touch. However, this team is a real joy to coach – their effort and their desire to improve has never been in doubt.”

Meanwhile, Melrose looks to make a dent in the always competitive Middlesex League. “Some teams are better than others but each game is going to be competitive.” And while the coach is pleased with their league win against Watertown, he has his sights on Stoneham, whom they play this week. “That’s a game we want to win,” he said.

They travel to play the Spartans on Thursday, Sept. 29  (post deadline).