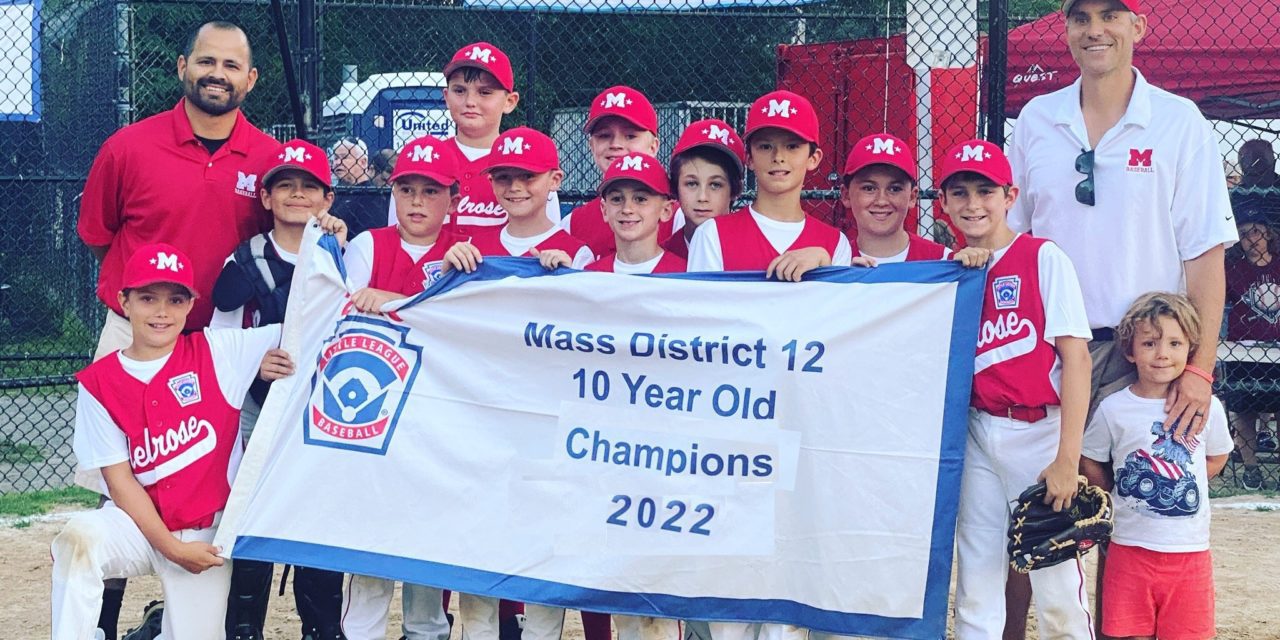 THE MELROSE Little League U10 squad are the District 12 champions. The team competed in sectionals this week after press time. (Courtesy Photo)

Catcher Cruz Ramirez anchored the defense with a superb performance behind the plate, most notably by blocking several pitches in the dirt with opposing runners on third base.

After going down 2-0, in the 1st, the Melrose offense chipped away at the lead. With the game tied 3-3 in the top of the 8th, Evan Snow got a great jump off of third base and stole home on a passed ball, giving Melrose the lead 4-3.

O’Leary got into a jam in the bottom of the 8th with men on second and third and no outs. The defense recorded two outs and then O’Leary delivered a clutch strike on a full count to close out the game, setting up Melrose for a district title chance two nights later.

On July 7, it was Victor Dale’s turn to fight off the hard-swinging Somerville offense. After Melrose jumped ahead 2-0 in the top of the 1st, the powerful righty took the hill against a team looking for revenge.

Somerville’s bats refused to go quietly, striking back with three runs to take back the lead. But Dale refused to relent and after settling in, he prevented Somerville from getting another runner across home plate.

While Dale’s performance was dazzling, the Melrose offense shined just as bright as they put up 15 runs on 15 hits. James Buono and Evan Snow lead the offensive attack, going a combined 6 for 8 with 5 RBIs.

Any Somerville threat was quickly dismissed by the Melrose defense. Cruz Ramirez’ brick wall-like performance behind the dish frustrated runners, as he refused to let anything past him. Eamon Pearson and Jack Obremski flashed leather at the corners, making incredible plays all night.

In the 6th, Ryan Silva came in to close out the game, locking in a district 12 title and a chance to compete in the Sectional Tournament this week, after press time.