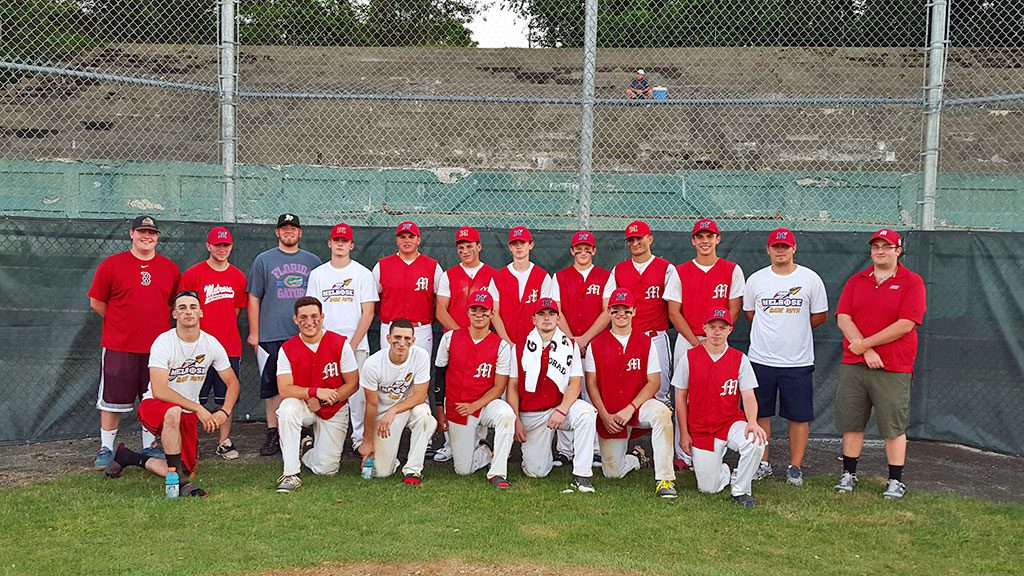 MELROSE — For the fourth year in a row Melrose has joined the Lou Tompkins All Star Baseball League which has been organized for the purpose of promoting the game of baseball through organized competition.

Devin McCarthy took the helm one more year and put together a young team to compete in the senior league. Coach McCarthy stated that he asked his 16 to 18 year olds if they wanted to step up to the next level and play against some big teams. They all voted yes.

The 11 team league consisted of teams from Boston, Burlington, Billerica, Framingham, Malden, Waltham, the North End, Stoneham and Beverly. The average age of those teams was 19-21 with players already playing baseball in college. Melrose, on the other hand, had an average age of 16-18.

Coach McCarthy has had most of these players for three or four years now, each year adding a few new players to make the team more competitive. Playing in the senior league this year was no easy task but Coach McCarthy and his staff were up for the challenge and his players were too.

As the season progressed Melrose was holding its own and even though their record of wins and losses wasn’t what they expected, they were in every game and never gave up.

From the phenomenal pitching of Derek Scimemi, Dylan Gaita, Justin McCarthy and John Caspierello. Melrose was always within striking distance to win every game.

Defensively Melrose had Alex Devartanian behind the plate, Nick Markley at first, Justin Hori at second, Evan Darwin at shortstop and Joey Siciliano at third. The outfield consisted of Andrew Canario, Nick Cordeau, Bill Kaliris, Dan Appleby, Sean Bruno and Alec Tauro helping wherever they could.

The good news was that for the second time in four years Melrose was going into the Tournament of Champions playoff week. This consists of the top eight teams in the league to play a double elimination week to make it to the semifinals.

Melrose had to get through the number one seed Billerica in the first round and Coach McCarthy had his team ready. He told them, “you earned your right to be here and you deserve to be here.” Melrose played that game as if it were its last and gave it its all and came out on top 7-3.

The next opponent was Beverly which was the next game on this journey. The next night Melrose went to Beverly and played its hearts out one more time and came out on top wining 6-5 in the seventh inning.

The boys were ready, the game came and it was a battle and in the end Melrose came up short and its season was over. There would be no championship game this year.

Coach McCarthy took the boys to left field and sat them down and explained that this year was not a year of wins and losses or even championships but a year of a very young team playing in a league made up of players with a lot more experience and in age.

Coach was heard saying, “Your goal this year was to play at a level that you’ve never played at before and compete. You did that and I couldn’t be prouder as a coach.”

As the team was getting ready to leave, the commissioner of the LTA and the coaches of Beverly and Billerica came over to say one thing to our team and that was, “You guys were young and scrappy and played well against some tough teams in this league and after seeing what we’ve seen this season you have earned the respect of all of the teams in the senior league. You play hard and we applaud you.”

Coach McCarthy had this to say to the parents of this year’s team, “These kids never gave up and gave it their all every time they hit the field. I’ve had some of these players since they were 13 years old and now I’ve seen them grow into the men they are today. I wish them all the best in the next year either at the varsity level or in college. On the field or off, I am proud to say that I have coached some of the best Melrose has to offer.”

Coach McCarthy, Coach Dave Largenten, Coach Paul Keaton and Coach Pat Poulin would like to thank all of the parents that supported them this season, and also thank Joan Bell and the Parks Department for having the best fields in the league. Every team that came to Melrose was in awe of our facilities and asked what our secret was, we just said great people in a great community.