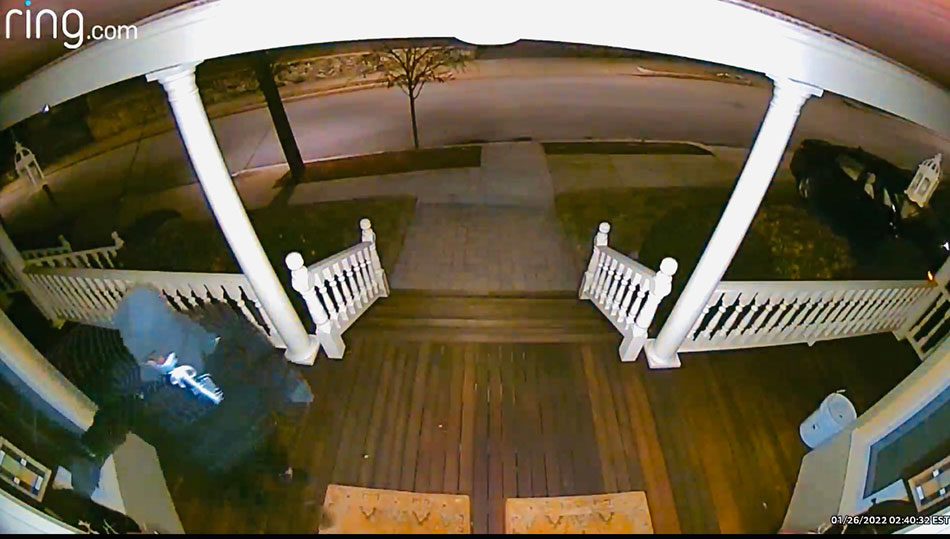 POLICE ARE ASKING FOR the public’s help in identifying a man suspected in a home invasion on Wednesday morning. The man also is suspected in other attempted vehicle and house break-ins, such as the one shown above caught on home surveillance, and the theft of two cars in the neighborhood. (Photo Courtesy Melrose Police Department)

About 2:50 a.m., Melrose Police were dispatched to a home on Lynde Street for a report of a home invasion. An initial investigation determined that a man had entered the home and demanded items from an occupant and that a physical confrontation ensued. The resident, a 19-year-old female, suffered a knife wound to the neck during the incident.

She was transported by Melrose Fire and EMS by ambulance to an area hospital to undergo treatment for her injuries.

Melrose Police also are investigating reports of attempted home and car break-ins in the area on Tuesday night and early Wednesday morning, and a pair of vehicle thefts, including one in which the keyless start keyfob was left inside the vehicle.

In each instance where the suspect’s break-in attempts were successful, entry doors were left unlocked.

“I cannot stress enough how significant a step the simple act of locking your home and vehicle doors can be in preventing you from becoming a victim of crime,” Police Chief Mike Lyle said. “I urge all residents to remember to lock their homes and vehicles.”

The Melrose Police Department is continuing to actively investigate these incidents.

Anyone with information about these incidents is asked to contact the Melrose Police Department at 781-665-1212.

Police continue several other investigations, including a look into the alleged passing of a counterfeit bill on Wednesday, Jan. 19.

At about 11:45 p.m. someone came to police headquarters reporting that they have a restaurant in Everett. Food was delivered earlier in the day to a Melrose resident and the delivery person was handed a $100. When the employee returned to Everett, it was determined that the bill was fake.

On Sunday, Jan. 23 around 12:30 p.m. police were told that two men were in Marathon Sports on Main Street and attempted to buy $35 worth of running gear with a credit card. The card was not just declined; the check-out person saw “card fraud” come up when ringing in the purchase as well. When asked for some identification, the two men decline, paid for the items with cash and hurriedly left the store.

At about 1:15 the same afternoon, police were told that some time earlier in the day, a vehicle had its tires slashed, its rear window smashed and its front windshield cracked while parked on Tappan Street.

On Thursday, Jan. 20 at about 9:10 a.m. an employee of Garden Remedies on Route 99 told police of an unknown motor vehicle parked in the lot overnight. It was soon learned the vehicle had been stolen in Revere.

A member of the valet parking staff at MelroseWakefield Hospital reported that his vehicle had been stolen around 9:30 a.m. Wednesday, Jan. 19. The vehicle was found earlier the next morning on Eastern Avenue in Malden.

Police wrote 31 parking tickets for vehicles that did not have permits on Berwick Street shortly after 2 a.m. on Tuesday, Jan. 18.

Twenty nine-year-old Jean Cypien, 278 Main St., Malden was arrested by State Police around 1 p.m. and handed over to Melrose officers for his part in the alleged shooting incident two months ago.

According to police, Cypien is suspected of firing shots at a motor vehicle around 3 p.m. on Nov. 19 near the corner of Mount Vernon Avenue and Mount Vernon Street.

Following are other examples of recent police business:

At about 8:30 p.m. a parent on Coolidge Road reported that a child was receiving questionable content over the Internet.

Someone was in distress after falling on Ashland Street around 8 a.m.

A student reportedly suffered a seizure at the Lincoln School around 10 a.m. and was taken to MelroseWakefield Hospital.

A green pickup truck was reportedly in the middle of Harold Street without license plates. Police were told by the owner that the vehicle was being donated and that a company was coming to get it.

Someone was having difficulty breathing on Pleasant Street around 10:50 a.m.

At about 1:30 p.m. someone who had lost consciousness in an apartment in the 800 block of Main Street was taken to MelroseWakefield Hospital.

A dog running loose in the area of Porter and Lincoln streets around 10:30 p.m. was brought to the Melrose Animal Clinic.

A citizen reported around 12:35 a.m. that four youths appeared to be trying to steal a Bobcat tractor from a property near the MelroseWakefield Hospital. Police said the Bobcat did not appear to have been tampered with.

Identity fraud was reported on Harding Road around 1:50 p.m.

A cab driver told police a fare did not pay him after being dropped off in the 300 block of Main Street around 1:10 a.m.

A water heater problem was reported at Kindercare Day Care on Lynn Fells Parkway around 4:50 p.m.

Three parking tickets were written on Ellsworth Avenue around 2 a.m.

A 57-year-old Stoneham man will be sumonsed to court for the unlicensed operation of a motor vehicle after reportedly crashing into a tree on Washington Street around 10:30 a.m.

Credit card fraud was reported on Hesseltine Avenue around 1:30 p.m.

No injuries were reported in a three-vehicle accident at the corner of Lynn Fells Parkway and Tremont Street around 5 p.m.

Another accident was reported on the Lynn Fells Parkway at Melrose Street around 6:45 p.m.

Fraud was reported on West Highland Avenue around 10:45 a.m.

A man was taken to MelroseWakefield Hospital after collapsing on Upham Street around 11:25 a.m.

At about 4:40 p.m. police were told that a man walking his dog on East Foster Street tried the left and right door handles of a parked motor vehicle. When asked what he was doing, the dog walker said no vehicles should be parked on the street.

Someone was apparently going car to car trying to open vehicles on Washington Street around 1:30 a.m.

First responders helped someone who fell on Trenton Street around 7:05 a.m.