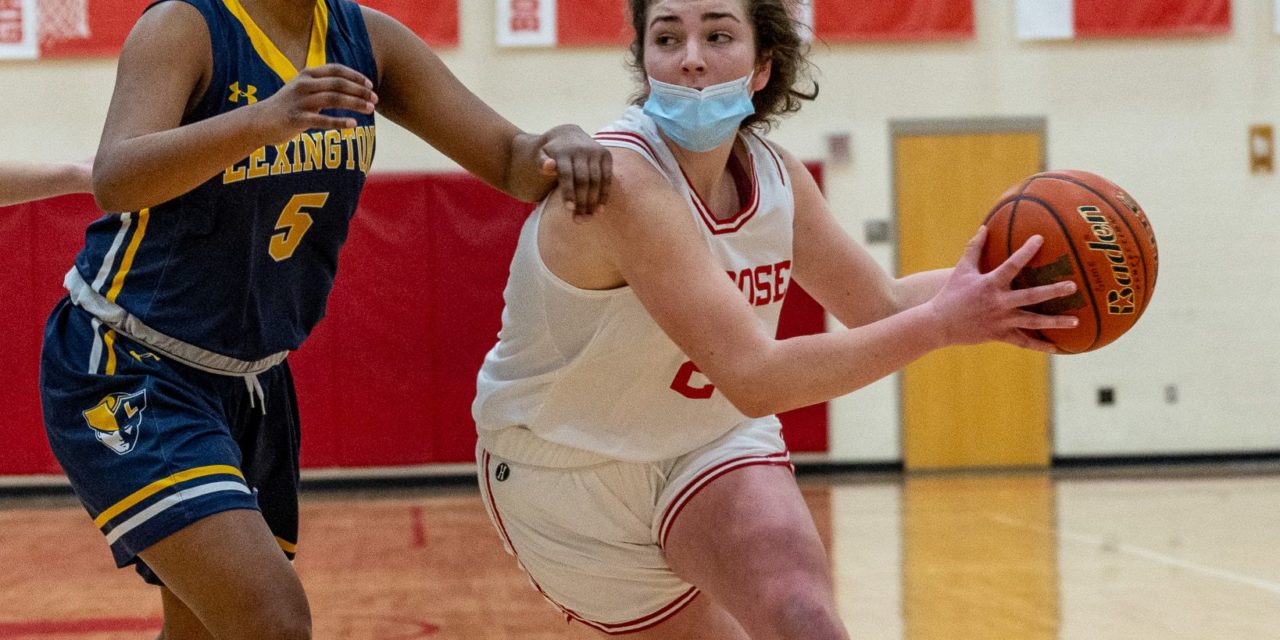 MEGAN CASEY, junior, is one of the leading scorers for Melrose, who picked up a win over Medford, 50-16 last Saturday and Arlington on Tuesday. (Raj Das edphotos.com)

MELROSE—The Melrose High girls basketball team picked up two more wins on the season after a massive 50-16 win over Medford on Saturday and a dominant 50-30 performance over Arlington on the road on Tuesday. The wins come off the heels of a squeaker loss to Lexington last Friday evening, 46-43, so it’s safe to say as this team reaches midseason, they’re getting stronger each day. They’ll need to continue a winning streak if they want to fall under consideration for a post season, but these recent efforts show they have the ingredients to pick up more victories. There are nine games ahead and several are winnable, and this evening, Friday, Jan. 28, Melrose hosts Watertown at 7:00 p.m.

Melrose has displayed a varied offense with several players earning double digits in scoring, and against Medford saw 10 different scorers, thanks to a generous use of bench. Junior Sofia Smith led Melrose with 10 points, and she also led against Arlington with 10.

Against Medford, Melrose took an early 11-6 lead at the end of the first quarter and never looked back thanks to a nice three pointer by Lily Nolan and solid foul line appearances by Sofia Smith and Chloe Gentile. Melrose was sent to the foul line much of the day and smooth shooting from Smith, Megan Casey and Gia Vlajkovic would help their cause. They took a large lead of 24-8 at the half thanks to two baskets from senior Ava Burns and a buzzer beater by Megan Casey. To open the third, Chloe Gentile fed an assist to Megan Casey for a layup and Sofia Smith hit a three that really stretched the game to 30-9. Gentile hit a basket on an assist by senior Ella Brennan and Lily Kavanaugh entered the game along with Emily Lucien and the two connected on a series of shots that gave Melrose a 41-14 lead. The last five minutes were dominated by Melrose, particularly by Lucien, and Elaine Albuja, who had two steals and a basket at the buzzer to end the rout, 50-16.

That came on the heartbreaking loss against Lexington last Friday evening at home. Against Lexington, Melrose freshman Scarlet D’Addio wowed with 14 points and Melrose basically had the game before losing steam in the last three minutes for a disappointing 46-43 loss. Melrose was off to a quick lead behind baskets from Scarlet D’Addio and Gia Vlajkovic before Chloe Gentile fed Sofia Smith with a ball for a Smith layoff that drew a foul for an and-one that gave Melrose a 9-7 lead. Megan Casey would extend that lead to 16-7 at the end of one. Melrose scored 13 points in the second behind work from D’Addio and Megan Casey, who was solid at the foul line, and the Red Raiders held a 29-19 lead at the half. But Melrose had a quiet third quarter that allowed Lexington to creep back into the game in scores of 29-25 and 35-32 despite solid work from Sofia Smith and Lily Nolan. Melrose hung on to a 36-34 lead to open the fourth, when Lexington came alive at the right time and took their first lead of 44-41 with just two minutes to go. From there, despite nice baskets from Megan Casey, Lily Nolan and Lily Kavanaugh, Melrose came up empty at the buzzer, 46-43.

But it might be Melrose’s 50-30 victory against Arlington on Tuesday that was the most impressive of the season. The Red Raiders would again rely on 8 different scorers, with Smith leading the charge. Melrose took a lead at halftime and entering the third was up 24-14 over the Spy Ponders. According to head coach Bill Hirschfeld, Melrose was able to shake off their (often) slow third quarter efforts. “We did well on a two minute drill, we came out fast and Sofia got us going immediately with a three and another basket, that kept the momentum.” He also pointed to the defensive efforts of juniors Chloe Gentile and Gia Vlajkovic. “They were strong on the boards and that helped. Overall, I was happy with our second half defense. Arlington was a good team, it was touch and go in the beginning.”

Melrose is coming together at the right time. The team is averaging 53 points on the board since early January and have won 3 of their last 5 games, with their losses within just 5 points. Call it an upward trajectory. “We want to keep the train rolling,” says the coach.

Melrose wants to continue winning streak when they host Watertown at home Friday night. This is the second meeting between the teams, Watertown topped Melrose 42-32 on December 14. But after six weeks they might be looking at a different Melrose squad. Action starts at 7:00 p.m.