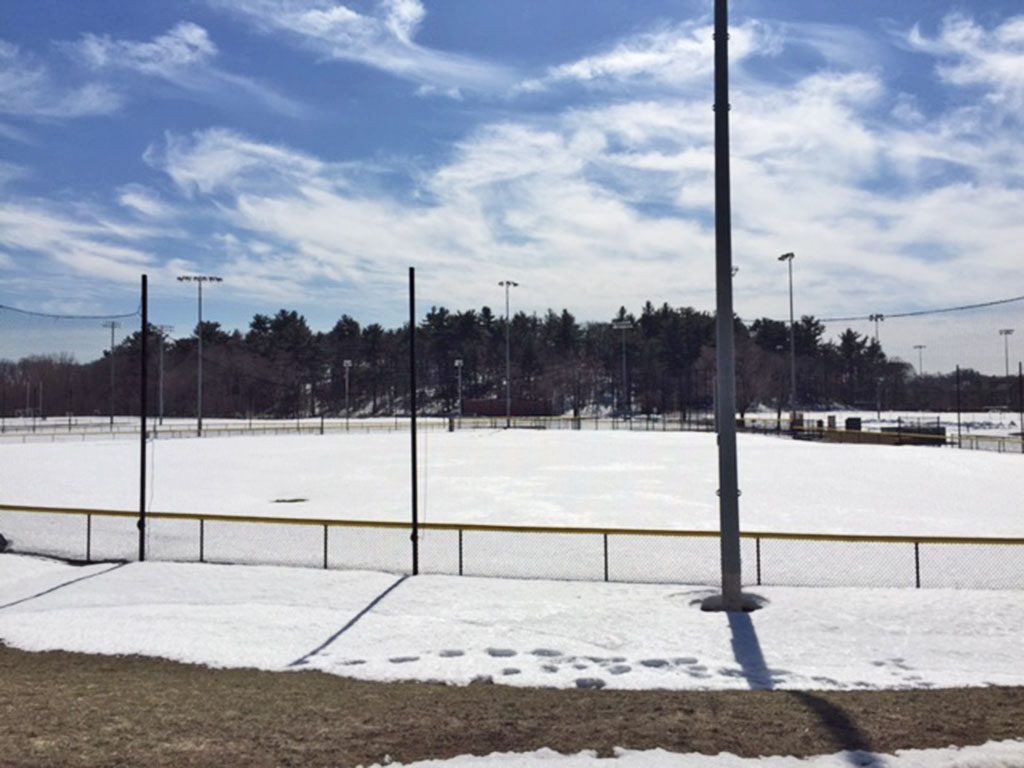 PINE BANKS Park’s baseball diamond remains under snow as of Tuesday when this shot was taken. (Mike Gentile photo)

MELROSE—It’s spring time. High school athletes have traded basketballs for baseball gloves and when they venture outside to practice Melrose is still covered in snow. When will the snow melt? And will they get all their games in?

Things are looking okay at Melrose High School’s Fred Green Football field. Passersby may have noted how clean the field looks. It was plowed with special equipment to preserve the turf a few weeks back in anticipation of the upcoming lacrosse seasons.

“The lacrosse field is practice-ready,” confirms MHS Athletic Director Pat Ruggiero.”The bleachers have been cleared and the walking track area as well. Entrances and restrooms will be ready, it will be completely accessible.”

Ruggiero was reached by phone Tuesday to discuss what measures Melrose is taking to prepare for its busy spring sport season. “The city is proceeding cautiously because the Fred Green field is an expensive complex. Its supposed to warm up this week and that will help aid the effort.”

The MHS tennis teams will be dealing with most of shuffling, but that was the case before the snow started. A project to overhaul the courts that stand at the corner of Tremont and Lynn Fells Parkway was slated before Mother Nature dumped over 100 inches of white stuff, which explains the pile of snow now covering it (a/k/a the “Snow Dump”).

As a result, look to see a lot of schedule swapping between the tennis teams. The boys and girls teams will equally split the Crystal Street Courts (rotating home and away games) while junior varsity teams may see time there, and possibly local tennis clubs willing to give up a few hours of court time. In the case of rain or inaccessibility, as always, the varsity teams may go inside for games to local tennis clubs.

“It’s not ideal and it’s inconvenient but we are doing our best to accomodate everyone,” says Ruggerio. “We’re already in better shape then some of the communities around us, who don’t have junior varsity tennis teams that need to secure time.”

As for baseball and softball? The baseball’s home field of Morrelli Field is grass which means the drying out process will be a lot longer. In years past Melrose has utlized Pine Banks Park (their one-time home) as an alternative. Don’t be shocked to see them start their season there.

The girls teams home is in the newly redesigned and impressive diamond at Pine Banks, which is a dirt infield. “All the fields at Pine Banks are still under snow,” confirms Ruggiero. “We’ve been working with Malden to see where we are at. The baseball field is turf which is helpful but the diamond and batters box are natural. We’re fortunate there were tarps put on them before all the snow. In terms of those fields, I would say ‘wait and see’.”

She also noted that junior varsity teams that normally play at Pine Banks may have to adjust their schedule to allow play on other fields including the sought-after baseball turf.

The well-used track and field complex at Pine Banks (home to Melrose track) benefits from open sunlight, and as of Tuesday, the pavement of the track was becoming visible. However, the grass interior will make it a challenge to conduct field events so early in the season. Melrose boys and girls outdoor track teams are only slated to host 2 meets each, the first as early as April 7.

Fingers crossed that Mother Nature will lean on the sunny side of things as folks await the eventual arrival of spring.