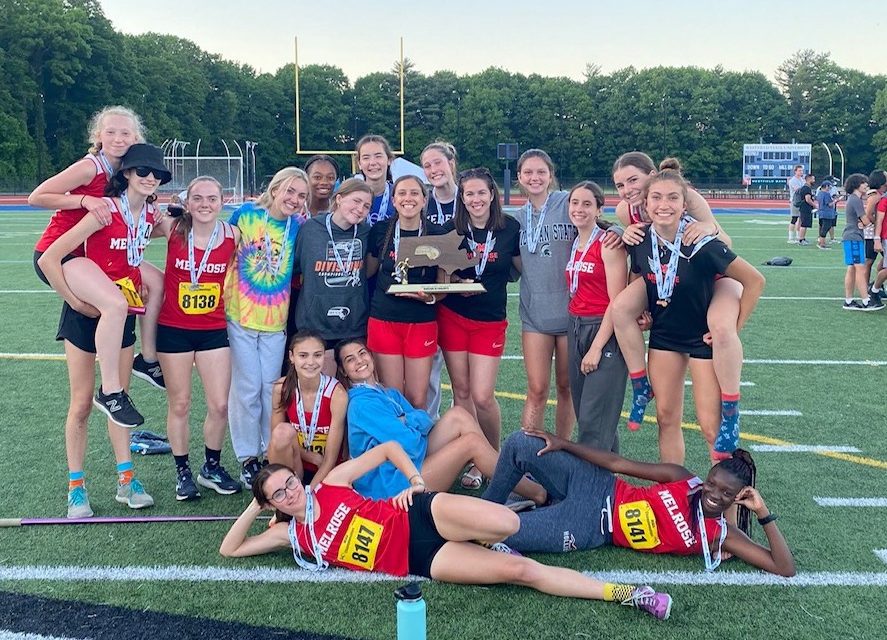 WESTFIELD—The Melrose High girls outdoor track team are Div. 3 State silver medalists and have crowned two state champions in one of the best showings ever for Melrose track when they competed at the Div. 3 State Championship held at Westfield State from May 27-29.

It was a remarkable day overall as Melrose crowned not one but two state champions in seniors Anna Mackey and Taylor Pesce, who topped the entire Div. 3 field in the 800 and triple jump, respectively. It was a second state title for Mackey, making her one of the most celebrated MHS athletes in recent history. The Colby-bound runner clinched a Div. 3 state title in the 1000 over the winter track season. Pesce simply had a day – besides becoming state champ, she took home a silver medal in the high jump and advanced to finals in 100 hurdles.

Melrose won a total of 76 points, good enough for second place and one of their best state championship results in recent memory. Melrose had been leading going into day 2, poised to become the first ever state champions outdoor track team for MHS until a final push by Mansfield on Sunday allowed them took the top spot with 105 points.

There were plenty of medals earned in the day, more than Melrose has amassed in many many years. And after this effort, Melrose will advance nearly 10 athletes to this weekend’s All State meet at Westfield State. They include both Mackey and Pesce who will represent Melrose in the 800 and triple jump, respectively. Pesce is seeded first among all triple jump athletes with a seeded distance of 37-09. 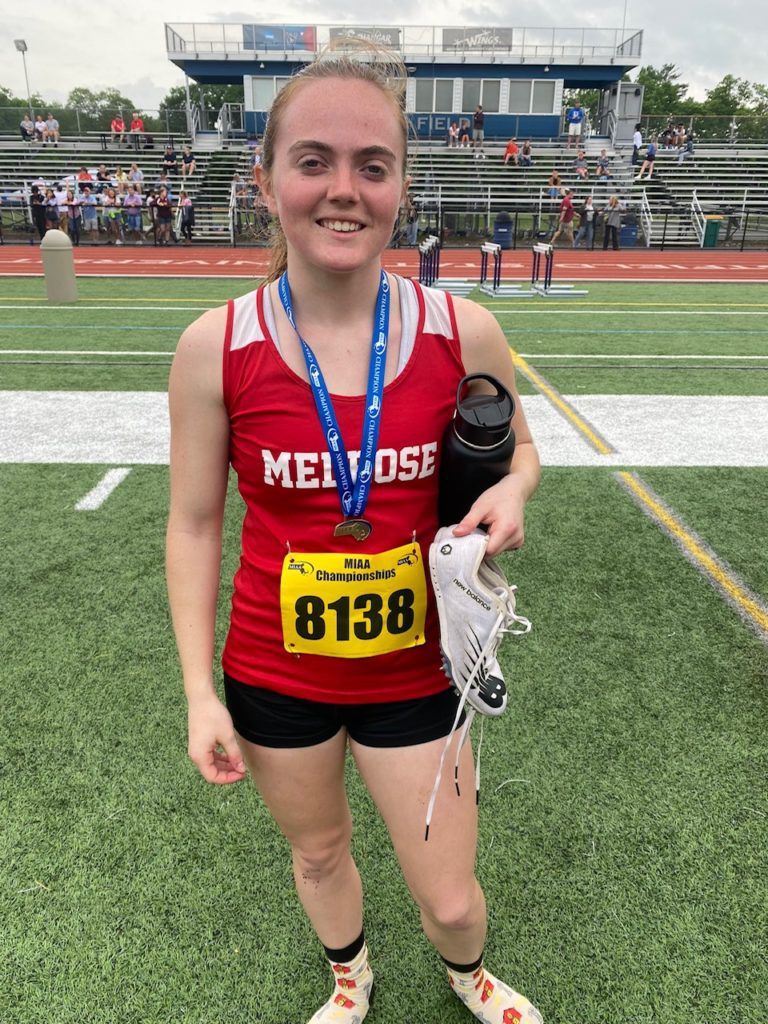 Melrose will also advance their 4×400 relay team of Kate Sikkema, Anna Mackey, Autumn Whelan and Cadence L’Heureux, who earned silver in their race, along with Scarlett Timm in the high jump and Kate Sikkema in the javelin (seeded 4th) and Charlotte Tysall in both the 1 mile and 2 mile.

Proud Melrose coach Shannon Kane lauded her team’s efforts. “It feels truly amazing and I couldn’t be more proud of girls. We’ve been training to be at this level for a few years now and just to see all the pieces come together this past weekend was amazing to watch and such a great accomplishment.”

For senior Taylor Pesce, this new title has been a culmination of years worth of work. “It feels amazing,” she says. “There have been many ups and downs over the past four years. It has definitely taught me the importance of perseverance. Making it this far is already a huge accomplishment so placing first and advancing to All States is cherry on top.”

Pesce is grateful for the support of her coaches, family, but most especially her mom, Alyssa. “She was the one who convinced me to do track even though I had no friends competing in it freshman year. Because of her, I found a sport I love and met so many people who are now very good friends. My mom supports me at every meet and pushes me to do better. Also want to thank coach Kane, Nicole, Michelle and Matt.” 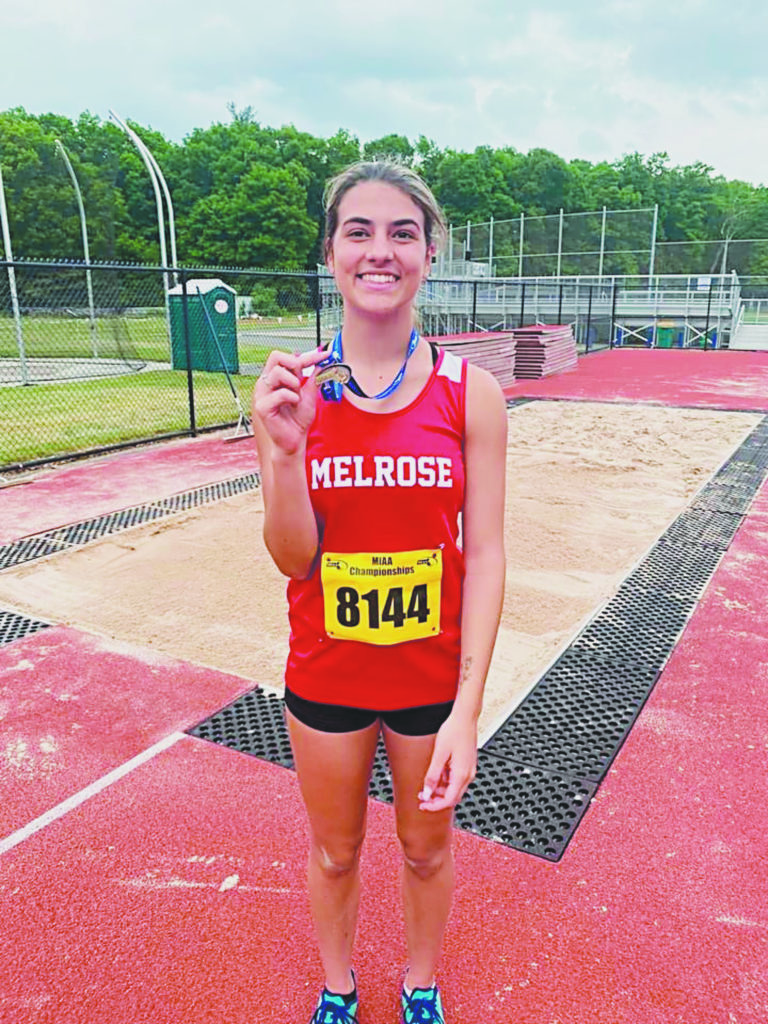 Senior captain, and now two-time state champ, Anna Mackey is no stranger to the #1 spot on the podium. Mackey became a state champion in the 1000m over the winter at the Div. 3 Indoor State finals. This win was just as satisfying.

“It felt incredible to be able to stand for work I have put into the sport, as well as being able to represent Melrose track again at the state level,” says the modest two-time champion. In getting there, Mackey took the same approach she made when she clinched her state title in February. “I think I was seeded first so the goal for this race – and my race last winter – was to stay in front but not expend too much energy that people would catch me towards the end.”

It paid off. After graduation, Mackey will now advance her running career to Colby College, where she is expected to compete in mid-distance in both the indoor and outdoor season. It’s been a long, successful road with a lot of help from family and friends. Mackey says, “I’d like to thank my coaches Shannon Kane and Nicole Akouri, my teammates, my parents [Tonya and Dave] friends and Kayne West for excellent pre-race music.”

Melrose had a top to bottom incredible day. Early work was done by Pentathlon athletes Cadence L’Heureux, freshman, and senior Julia McAree, who topped all competition in the 800m and high jump, respectively. They also cracked the top 6 in the 100 hurdles and long jump with L’Heureux second in the event. Both of them placed 4th (L’Heureux) and 5th (McAree) in the overall event. Relay team 4×800 medaled in fourth thanks to the work of Charlotte Tysall, Maizie Frakt, Jillian Bakey and Darby Thompson. Melrose’s Scarlet Timm wowed with a silver medal in the high jump. Melrose saw one of their first medals come in the form of senior Autumn Whelan who placed 8th in the 400 dash with a time of 62.99. She would also be a crucial leg in the silver medal winning 4×400 relay team. Charlotte Tysall earned a meal in the 1 mile with a fifth place finish and another in the 2 mile with a 4th place finish. Her teammate Jillian Bakey also clinched a medal in 7th in the 2mile. Senior Kate Sikkema became a state silver medalist in the javelin and will represent Melrose at All States.

On Sunday, Melrose saw work by Lily Nolan and Amara Otaluka in the 100 dash, Hailey Keegan, D’Mitra Mukasa and Meghan Radzik in the 200m. Darby Thompson ran in the 800, Maizie Frakt the 2 mile and Cadence L’Heureux the 1 mile (9th). Melrose’s 4×100 relay was represented by Hailey Keegan, Lily Nolan, D’Mitra Mukasa and Sophia Weissman. Amy Rowe represented Melrose in the triple jump and Molly Lytje in the shot put.

It was a collaborative effort by all the Melrose athletes who helped earn points to help Melrose become state silver medalists. Now, a handful of them will compete against all divisions. Including her state champions.

Notes coach Kane, “They really are high caliber athletes and they truly deserve this recognition for all of their hard work put, not only this season but for the past four years many of them have been on the team.”