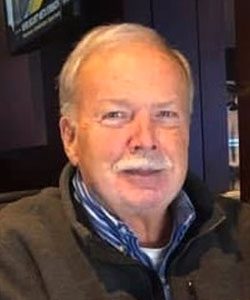 John was born in Chelsea on December 13, 1940, one of two sons of the late John and Doris (Lavandier) Lava. Raised and educated in Chelsea, he enlisted in the U.S. Air Force shortly after graduating from Chelsea High School. He proudly served four years in the Air Force as an Airman, First Class and was honorably discharged in October of 1962.

After receiving an accounting degree from Bentley University, John worked in the Boston financial industry for several years before becoming the Fiscal Manager for the Department of Corrections for the Commonwealth of Massachusetts. John was married to Carol Sarni on August 21, 1965 and they settled in Melrose to raise a family of three children.

John was an avid Boston sports fan, but especially loved college football. For many years, he spent Saturdays in the fall watching his favorite team, Alabama, with his family. He enjoyed playing cards, watching a sporting event and always had a reason to celebrate with a family gathering. Well read, John was a regular visitor to the Melrose Public Library, and the Boston Public Library. He also was a movie buff who enjoyed all types of movies.

Above all, family was most important to John, and he cherished any family celebration or event. He loved watching his grandchildren play sports, playing cards with his family, or going on a family outing to the Golden Gate Restaurant in Chinatown.

John will be deeply missed, but always remembered for his steady, positive outlook and incredible generosity. His uplifting nature, and love for laughter will live on in the hearts and minds of his family. May he rest in peace.

John was the beloved husband of the late Joan “Carol” (Sarni) Lava with whom he shared 51 years of marriage. He was the loving father of John P. Lava and his wife, Marisa, of North Reading; and Susan M. Lava and Michael D. Lava, both of Melrose. He was the caring brother of Kenneth D. Lava and his wife, Cathy, of Chelsea. H was the loving Papa of Sarah, Brian, Nicholas, Isabella, Mia, Christian, Jaxon and Ayva. He is also survived by several nieces and nephews.

Relatives and friends gathered for visiting hours at the Robinson Funeral Home, 809 Main St., Melrose on Wednesday, Sept. 1. His funeral service was celebrated at the funeral home on Thursday, Sept. 2 followed by interment with U.S. Air Force honors at Wyoming Cemetery, Melrose. To offer a message of condolence please visit RobinsonFuneralHome.com.