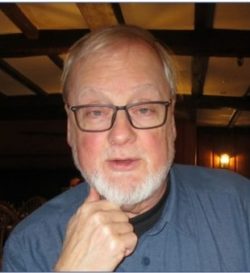 Enjoyed a wide variety of hobbies, humorous, and the life of the party

MELROSE – Thomas Ellis Price Jr., 73 passed away suddenly on Sunday, September 18, 2022, with his love and best friend by his side. Tom was a long-time resident of Melrose for the last twenty-six years. He was born in Holyoke on November 11, 1948, to the late Claire Roy Price and Thomas E. Price Sr.

Tom was raised in Chicopee and graduated from Westfield State College. He was a Sergeant in the U.S. Marine Corp stationed in Camp Pendleton, San Diego where he received an honorable discharge. He started his career working for a panel company selling paneling where he picked up his unique style of selling. From there he went into the technology industry working for Honeywell, Data General and EMC. There he developed and delivered sales training programs and traveled around the country training salespeople on the art of selling computers. On the platform Tom used his wit and humor to engage people in the nuances of selling. Making him an outstanding and funny sales trainer.

Later in his career he took courses at Worcester Polytechnic Institute in Worcester and became a certified Project Management Office (PMO) expert, at which time he established his own consulting business called Focused Project Management. He provided PMO consulting services to some of the largest Financial Institutions and Biotechnology firms in Boston. In his last working years he worked with the State of Massachusetts in numerous groups including the Department of Transportation and Health and Human Services.

Often called a renaissance man, Tom enjoyed a wide variety of hobbies and would dive deep into each of them to thoroughly understand them. He was passionate about things like photography, woodcarving, music, cooking, biking, and urban walking. You might have seen him with his hand carved wooden walking stick and his orange Moxie hat chocking up miles from Melrose to Boston often getting lost in the process. Tom had over two hundred cookbooks in his collection. He was an avid cook and those that had the pleasure of enjoying his meals would say even a gourmet cook. He had a similar large collection of woodworking books and a workshop full of equipment where he could make almost anything and fix everything.

At family gatherings Tom’s humor would have everyone in stitches. He was often the life of the party. Still there were times when he almost seemed shy or reserved, deep in thought trying to figure out a problem until he had a solution. We will miss his laughter and how he was a joy to be around. He wasn’t fancy and really didn’t care much what others thought which was evident when one day he frightened the neighbors wearing his furry hat while snow blowing or when wearing his tie-dyed shirt, work boots and big yellow headphones while cutting the grass.

He was an honorary member of the Cousins Group that took trips together to Ireland, Maine, Upstate New York, San Diego, Boothbay Harbor etc. These trips were often the highlight of his year full of fun, laughter, jokes, good wine, beer, good food, and lots of exploring. He especially enjoyed visiting China recently and having lunch on the Great Wall, eating the best Peking duck in Beijing, and visiting the historical site of the Terracotta Warriors in Xian. He was amazed and in awe of the culture. Always a soft heart he could never pass by a homeless person without giving them some money. He was grateful for what he had, and others did not.

A public memorial service for Tom will be scheduled sometime in the future. A private family memorial will be held in the next week. In lieu of flowers memorial contributions may be made in Tom’s name to the Wounded Warrior Project at www.woundedwarriorproject.org/donate. Funeral arrangements by Gately Funeral Home, Melrose, MA. To offer you condolences go to www.gatelyfh.com.