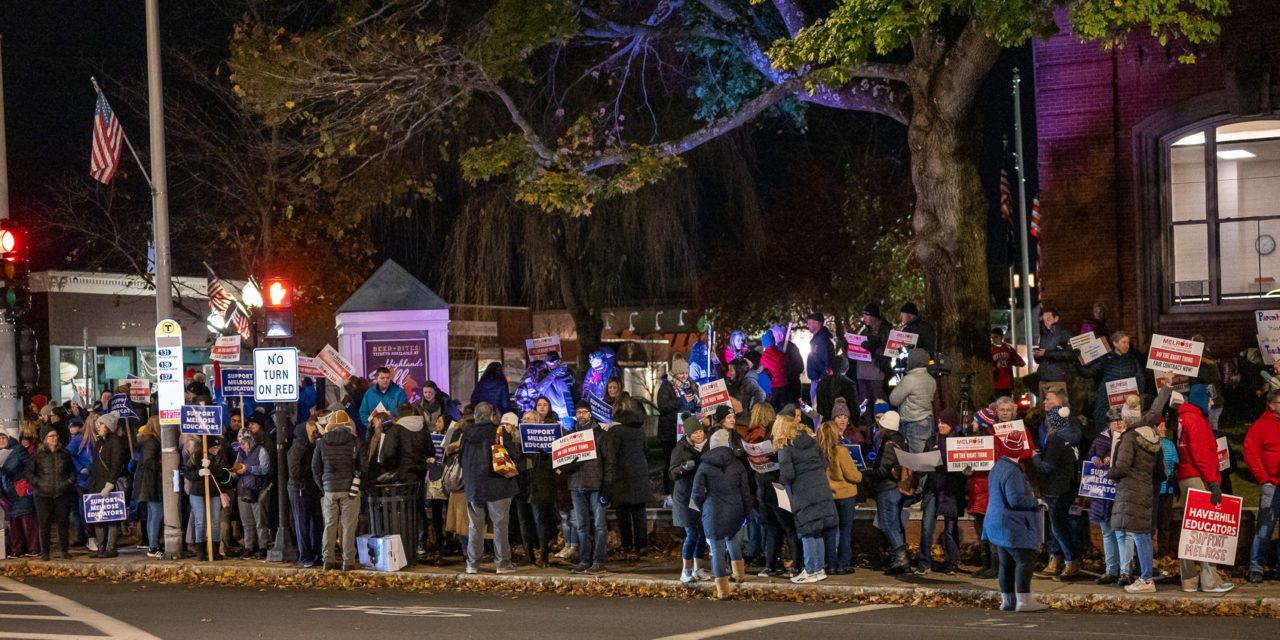 MELROSE TEACHERS and their supporters protested outside City Hall Monday night because a new contract with educators has not been finalized. The last work agreement expired at the end of June. (Photo by Raj Das, edphotos.com)

MELROSE — Until they have a new contract, the city’s educators have decided as a group to do only what their most recent agreement says they must. And nothing more.

This isn’t sitting too well with the School Committee, which has been trying to reach new terms with teachers. The teachers’ pact with the city expired at the end of June; they have implemented a job action called “work-to-rule” as a way of protesting the fact they have not received raises since that time.

The teachers are demanding fair pay and treatment. They protested outside the City Council meeting Monday night and at the School Committee meeting Tuesday.

Both sides continue their negotiations.

Following are statements by both School Committee Chair Jen McAndrew and Mayor Paul Brodeur, who also serves on the school board:

“I’d like to take this opportunity to speak to the ongoing contract negotiations and to provide some context on a few issues that keep coming up. As I said in October, the Melrose School Committee continues to negotiate with the union–the MEA–for both our teachers (Unit A) and our paraprofessionals (Unit C).

“Much of what we discuss in those collective bargaining sessions is rightly confidential. And, when it comes to what we can say, I know it can feel a little bit like “two steps forward, one step back.” For example, I am both disappointed by the MEA’s work-to-rule action and concerned about the potential impact on our school community . . . and the Committee remains fully committed to working collaboratively with the MEA to settle contracts for our teachers and paraprofessionals.

“Even when there is progress, it can feel too slow. And we know that. We feel that, and we know the community does too. I imagine the teachers and paras do too, though I’m certainly not purporting to speak on their behalf.

“I will say that, in my opinion, progress has in fact been made–on both unit contracts–over the past several weeks. The School Committee has put forward various proposals on October 22, October 31 and November 7 that address key issues, including compensation proposals that, at present, utilize all resources that the District has available.

“Let me also be clear that the resources we have available for negotiations have been budgeted for FY23 and are not impacted by the FY22 shortfall, which has since been closed.

“Going beyond what we have available will require additional funds from the City, and we are in discussions with the City around that.

“Per state law, the current terms and conditions of employment, in effect during the term of the contract, continue in place until a successor contract is reached. Therefore, both the educators and the Committee do have the protections and rights of a contract at this time. Educators did receive their step increases, which can range from 2-8% increases; they have all benefits available to them such as personal days and sick time; and they will receive all longevity increases in accordance with the contract. In addition, several side letter agreements on key issues have been negotiated and signed along the way. When a successor agreement is reached, educators could also receive retroactive cost-of-living increases back to the beginning of the school year if that is agreed to by both parties.

“This Committee wants to keep working on this and wants to move to an agreement soon.

“There are a few other issues that continue to arise in the public discourse. On the override . . . first and foremost, this community’s work to pass an override in 2019 was absolutely critical. And those funds were deployed, as designed and articulated at the time, including: for new positions across the District, for instructional materials and supplies and, importantly, to support the salary increases in the last set of contract negotiations. The override funding has not been “lost,” it has been utilized. And it is unrelated to the School Department’s FY22 school budget shortfall.

“But it is also true that no one ever promised that one override was going to permanently solve every funding concern in the Melrose Public Schools. Melrose needed those funds, badly, do not get me wrong, and I am so grateful that the community stepped up and supported our students, educators and schools, as they often do. The override funding represented a very important set of investments to close some gaps and right-size some areas. That can’t, however, be the end of the revenue conversation in this community.

“And we see why. Since then, we have navigated an unprecedented global pandemic and a set of dramatically expanded costs. It is true that these costs were not adequately forecasted at the beginning of FY22 and that significant accounting errors were made, as we have discussed here. But again, just correcting the record here, it is not accurate to say that “$2 million was lost,” or that we don’t know how the money was spent. We have reported that the overage was largely due to special education costs, transportation costs and coverage during the pandemic. These were legitimate costs of providing important programs and services for our students and families. Further, we have since closed that FY22 gap with funding sources that are separate from the operating budget that we have for FY23 (including for these contracts).

“In summary, we remain committed to settling contracts for teachers and paraprofessionals with a contract that meets the needs of our students and educators. We know that our educational professionals have endured unforeseen challenges in the classroom over the past several years. Teachers deserve a contract that recognizes their hard work, expertise and dedication to our kids. And we also have a responsibility to reflect the needs and fiscal realities of this city. We remain committed to negotiating in good faith to reach an agreement as soon as possible, and we look forward to our next session with the union tomorrow (Wednesday, November 16).”

“I want to provide additional information regarding the fiscal reality of the City. Currently, the City is already at the maximum we can raise in property taxes. Based on State law, our tax levy can only grow by 2.5% plus new growth every year.

“Unlike other neighboring communities that have significant sources of new growth through commercial development, Melrose does not see a lot of new growth revenue on our tax rolls to support the critical services provided to all Melrose residents by both the School and City departments. This means that next year, outside of any increases in state aid, we will only have approximately $2.2 million of new City revenue to fund all City and School departmental expenses and contractual obligations, including such non-discretionary costs as health insurance and Medicare which are expected to grow by $746,000.

“I continue to be committed to arriving at fair contracts for all our employees, in keeping with my responsibility to submit balanced budgets and maintain the long-term financial health of Melrose.” 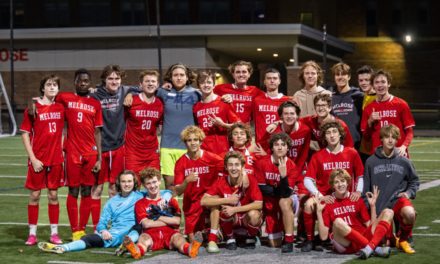