Memorial Day ceremonies go on despite cancellation of parade 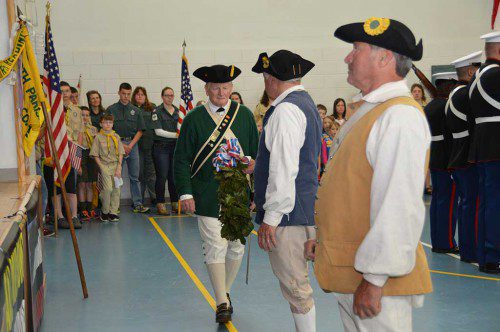 NORTH READING – A forecast for heavy rain forced the cancellation of the town’s Memorial Day parade for the first time in many years on Monday, but solemn Memorial Day Services were still held before a crowd of about 100 residents of all ages in the Batchelder School gymnasium.

Despite the change in location, the program for the day’s ceremonies was unchanged from the Memorial Day events usually held on the common and the North Reading Militia and Boy Scouts held the traditional early morning ceremonies at each of the town’s three cemeteries and Ipswich River Park starting at 6:45 a.m. despite the rain.

At 11 a.m. in the Batchelder School gym, Pastor Jonathan Del Turco of the International Family Church gave the invocation before opening remarks by Sgt. Geoff Bemiss of the North Reading Minit and Militia. After the North Reading High School Band played the National Anthem, Sgt. Bemiss read the roll of honor, consisting of the numerous North Reading veterans who have passed away since the last Memorial Day – a list that regrettably seems to grow longer every year.

The speaker of the day was Chairman of the Board of Selectmen Robert Mauceri, who referenced the plight of our nation’s veterans who experience long waits and receive inadequate medical care from the Veterans Administration.

“From the Revolutionary War forward, men women of our armed forces have placed their lives on the line. Far too many made the ultimate sacrifice.” Mauceri called the crowd’s attention to the fact that veterans who need urgent medical care still have to wait long periods of time for appointments at VA hospitals.

“Our veterans deserve much more. In memory of those who made the ultimate sacrifice, let us become advocates for our living veterans and make sure no vet has to wait for needed medical attention.”

The guest speaker of the day was House Minority Leader State Rep. Brad Jones Jr. “The men and women we honor today left behind mothers, fathers, husbands, wives, sons and daughters,” Jones said. “They gave their lives not only so we can be free but also for our children and grandchildren and future generations.

“Oliver Wendell Holmes called Memorial Day our most sacred holiday. On this and every Memorial Day we must never forget those who answered the call to serve.”

In addition to a U.S. Marine Corps Color Guard and the High School Band, the gymnasium was filled with numbers of Boy Scouts, Girl Scouts and Cub Scouts who helped observe the day. This year’s Honorary Parade Marshals, World War II and Korean War veterans, were seated in a place of honor on the stage in the gymnasium. 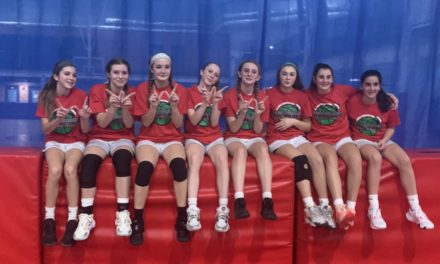