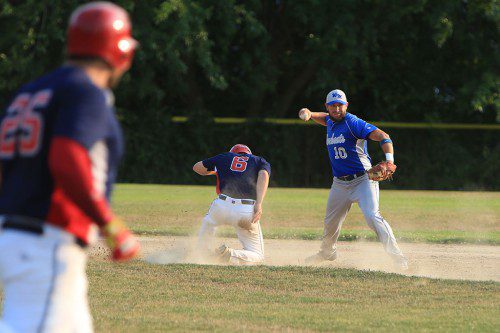 WAKEFIELD — The Wakefield Merchants won both of their weekend games, but it didn’t help them that much in the Intercity League standings as they remained in seventh place with a 7-14-1 record.

Still, Wakefield snapped a five-game losing streak with a pair of wins over the Arlington Trojans on Friday night and Reading Bulldogs yesterday afternoon. The Merchants topped the Trojans, 7-2, on Friday night at Summer Street Field then prevailed over the Bulldogs by a 9-5 tally yesterday at Walsh Field.

The Merchants plated three runs in the first inning and four in the second as they jumped out to a big lead early. Wakefield added two more runs in the sixth to give itself a little more breathing room.

Reading, meanwhile, scored three runs in the second and two in the seventh.

Both teams banged out nine hits, but Wakefield made the most of its scoring chances.

Scott Searles led the way with three hits while Louis Tarantino had two hits. One of Searles’ hits was a double.

Nicholas Napoli, Jake O’Rourke, Mark Poli and James Ramsey each had one hit. Napoli had a home run with his hit and drove in three runs.

Tarantino and Searles each crossed the plate twice, while Mike Sorrentino, Napoli, O’Rourke, Ramsey and Joe Barry each scored one run. Napoli knocked in three runs, while Searles and O’Rourke had two RBIs each. Tarantino and Poli both drove in one run.

Sorrentino and Barry each drew a walk from Reading pitching. Also, Tarantino and O’Rourke each stole a base.

The recipient of the run sport was right-hander Steve Keskinidis (2-3) who went the distance to earn the win. Keskinidis gave up five runs on nine hits while striking out six and walking one. He also threw a wild pitch.

Offensively for Reading, Mike DeDonato, Johnny Hayes and Rosario Missiti each had two hits. DeDonato’s hit was a double.

Steve Busby, Chris Bosco and Cam Farnham all had one hit for the Bulldogs.

Missiti scored two runs, while Hayes, Busby and Farnham each crossed the plate once. DeDonato and Bosco both had two RBIs.

Farnham drew the one walk given up by Keskinidis.

The Merchants ended their losing skein with a 7-2 triumph over the last place Arlington Trojans under the lights on Friday night.

Wakefield got a terrific pitching performance from John Russolillo (2-2) who went the distance to earn the victory. The right-hander gave up two runs on seven hits while striking out three batters and walking three batters.

At the plate, the Merchants collected seven hits with Tarantino leading the way with two.

Josh Band, Sorrentino, Napoli, O’Rourke and Paul McGunigle each had one hit for Wakefield. Napoli had the lone Merchants extra base hit with a double.

Tarantino and Sorrentino both scored twice while Napoli, Barry and McGunigle each scored one run. O’Rourke and Barry each drove in two runs, while Band and Napoli both had one RBI.

Tarantino walked twice, while Searles, Napoli and McGunigle each walked once. Tarantino also had two stolen bases, while Band and Sorrentino each stole a base as well.