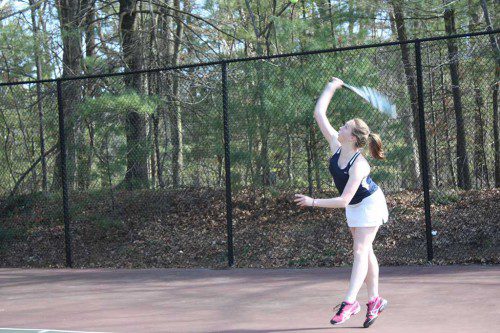 THE second doubles team featuring senior Hayley Timmons advanced to the quarterfinals of the State Individual Singles and Doubles Tournament, which will take place this weekend in Lexington. (Dan Tomasello Photo) 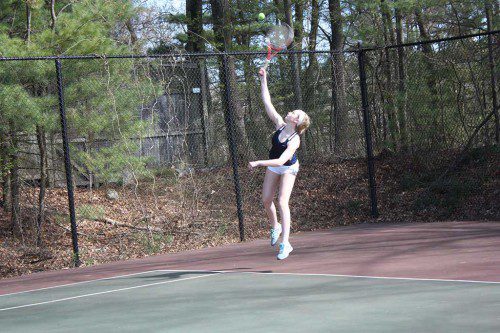 THE second doubles team featuring junior Katie Nugent advanced to the quarterfinals of the State Individual Singles and Doubles Tournament, which will take place this weekend in Lexington. (Dan Tomasello Photo)

First singles sensation Sarah Mezini and the second doubles team, featuring junior Katie Nugent and Hayley Timmons, advanced to the semifinal round of the tournament, which will take place in Lexington this weekend. Pioneers head coach Craig Stone informed the Villager this component of the tournament “combines the Weston semifinalists with the Lexington semifinalists to make a new quarterfinals, where a sectional champion will be crowned.”

“This is the third time in three years that Mezini, a junior, has advanced to the quarterfinals,” said Stone.

Stone praised Nugent and Timmons’ performance during the tournament.

In the second singles tournament, junior Katie Nugent won her first match by default. Nugent lost to Wayland’s Sydney Hus in three sets in the round of 32. After winning the first set 6-1, Mezini lost the second and third sets 3-6 and 4-6 respectively.

“It was a great match that lasted two hours,” said Stone. “A lot of long rallies.”

In the third singles tournament, senior captain Amanda Stelman defeated Chelmsford’s Abigail Segal 7-5, 6-3 in the first round. Stelman was trailing 1-4 in the first set before rallying to win the first set. She led the second set from start to finish. Stelman fell to Beverly’s Vanessa Kitova 0-6, 0-6 in the round of 32.

Skelley and Foley fell to Reading’s Ellie and Ruthie Wilson in two sets, 3-6, 0-6, during the quarterfinals.

Stone said he was pleased with his squad’s performance during the Individual Singles and Doubles Tournament.

“The tournament is a great opportunity to play the best players in the state,” said Stone. “I was very pleased with our results as a team and excited to be back next weekend with our first singles and second doubles team.”

The Pioneers began last week defeating Triton 4-1 May 9. The victory enabled the locals to qualify for the Division 3 North state tournament for the 34th straight year.

The second doubles team consisting of seniors Nicole Davie and Ally D’Amico won their match in three sets. After falling 1-6 in the first set, Davie and D’Amico won sets two and three 6-1 and 6-3.

“Varsity showcased the depth they have and we got to play plenty of JV matches,” said Stone.

The Pioneers dismantled Newburyport 5-0 May 11.

“Another dominant performance from the singles players,” said Stone. “Mezini continues to hit winners from both the forehand and backhand sides. Nevils is relentless as she moves her opponents all over the court. Stelman has turned the corner these last matches, blending power and control.”

“First doubles was untouchable, winning 12 out of 13 games, while second doubles struggled a bit in the second set but never played from behind,” said Stone.

The Pioneers faced Rockport on Monday, May 16 and Swampscott on Tuesday, May 17, both taking place after deadline. Lynnfield hosts North Andover on Thursday, May 19, beginning at 3:30 p.m.

“We are 10-1 but have some traditionally strong non-league team matches coming up this week in Swampscott and North Andover,” said Stone. “By the end of the week, we might get a better indication of where we are as a team at this point in the season.”