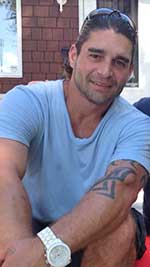 Michael was a graduate of Wakefield Memorial High School, Class of 1996 and had received his associate’s degree from Mass Communications College.

He was employed as an irrigation specialist for Designer Lawn Sprinkler, Co. in Wakefield.

In addition to his parents, Michael is survived by his loving wife Janelle L. (Brizee) Blais, his son Cashen A. Blais, and his grandmother Barbara Blais of Wakefield. He was the uncle of Ava Blais, son-in-law of Dagmar Brizee of Wakefield and the late Alfred Brizee; brother-in-law of Kevin Brizee and Freddie Brizee and their families; godson of Cheryl Strong and Robert Blais. Also survived by several aunts, uncles, cousins and friends. Michael was predeceased by his brother Christopher D. Blais.

His funeral will be held from the McDonald Funeral Home, 19 Yale Ave., Wakefield on Monday at 9 a.m. followed by a funeral Mass in St. Florence Church, 47 Butler Ave., Wakefield at 10 a.m.

Visitation for relatives and friends will be held at the Funeral Home on Sunday from 2-5 p.m.