With ‘Port’ at Salem State University

AS DIRECTOR of a play titled “Port” to be presented at Salem State University, Morgan Flynn, kneeling, is shown giving notes to actors Evan Parsons and Misha Barker for their roles as Danny and Racheal. 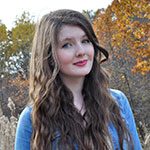 On Tuesday, Nov. 25, Flynn will turn 21 years old, just one week after directing her first play at Salem State University, where she is a member of the junior class and working toward a bachelor’s degree in fine arts.

She could not be more excited about the opportunity to direct a play at the college, something she said is second nature to her.

The play’s tile is Port. Written by British playwright Simon Stephens, the story follows a young girl named Racheal and focuses on whether the town where an individual grows up influences and controls that person’s future.

The two-act play will be presented in the Metro Room on Ellison Campus Center on the North Campus of the college from Thursday, Nov. 13 through Sunday, Nov. 16, and Flynn is looking forward to showcasing her directing talents as well as those of the actors who will perform various parts.

“I love this play because it connects with the youth of today,” said Flynn. “It has a great flow of dialogue that shows how teens really do talk.”

Set in a poverty-stricken area of Stockport, England, Port is a character-driven play and addresses the effects of relationships.

For instance, Racheal’s father suffers from alcoholism and her mother left the family early in Racheal’s life. Now, years later, the young girl finds it difficult to accept love when it comes her way.

“The scenes are intimate moments of Racheal’s life,” said Flynn, adding that the play has tragically funny moments.

Racheal lives with her father, said Flynn, and looks for ways to leave the nest.

Flynn said she could relate to Racheal in some ways because, like Racheal, she has faced her own adversities but has emerged with hope for the future.

“Many of us do the same as Racheal,” said Flynn. “Instead of letting challenges defeat us, we rise to something better. Her optimism is incredible throughout the play.

“We have the capacity to define ourselves or let our town and past define us. Ultimately, it’s our choice,” she said. “Everyone falls down but not everyone can stand up again.”

Port was not Flynn’s first choice for a play. At first, she proposed Punk Rock, a play about a school shooting. The play was selected and auditions were held, but after the first rehearsal, Flynn received word that the rights to the play were not yet available.

“We had to select a new play, and we decided on Port. It was like Racheal rose from the ashes of Punk Rock,” she quipped.

The play, she said, challenges the viewer to consider that maybe they need to exist for themselves sometimes, that they need to get out and watch the sunrise.

“Port reassures us that we will be all right, that hope will carry us through,” said Flynn. “Sometimes people need that reminder.”

Flynn’s career aspirations are currently in the navigational phase.

“I took a Directing I class and discovered this natural passion,” she said. “When I attend grad school, I’m not sure what my focus will be but eventually I’ll know what path to take.

“This new approach to theater helps me follow my instincts,” she said, “because although it comes naturally to me, I do feel like it’s a lot of work.”

Flynn is the daughter of Tom and Deb Flynn who live in the Montrose area of Wakefield. She also has a sister, Jenn, a junior at Wakefield Memorial High School.

While in high school, Flynn acted in Machinal and The Diary of Anne Frank directed by Emily Holmes and Following Wendy under the direction of Dianne Powers.

She also studied at the Shakespeare Globe Theater in London this past summer, an experience she said she will never forget.