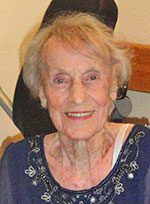 Mrs. Todd was born in Arlington on Sept. 12, 1917 and was the daughter of the late Charles and Margaret (Doughty) Law

Mrs. Todd was raised in Arlington and was a graduate of Arlington High School. She worked in Special Education in Wakefield and was member of the First Baptist Church. For 60 years she had been a resident of Salem Street in Wakefield.

Her funeral service will be held in the First Baptist Church, 8 Lafayette St., Wakefield on Friday, Feb. 20 at noon. Visitation will be held at the church prior to the service, beginning at 10:30 a.m.

Interment will be at Mt. Pleasant Cemetery in Arlington.

Arrangements are in the care of the McDonald Funeral Home, Wakefield.