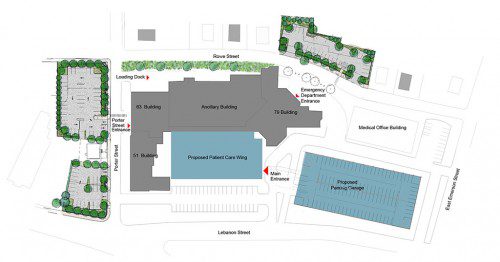 SOME OF THE PLANNED changes at Melrose-Wakefield Hospital.

MELROSE — Hallmark Health System is in the preliminary stages of planning improvements to Melrose-Wakefield Hospital to better serve its patients and the residents of the surrounding communities.

The improvements, which would likely take place over four distinct phases, will culminate in the creation of a new patient care wing to better accommodate and care for patients requiring critical care, maternal and infant care and emergency care.

Other aspects of the proposed plans are designed to improve patient access to facilities, provide services for the growing population of patients in Melrose, alleviate neighborhood on-street parking and congestion and update existing patient care space to better meet the needs of patients in today’s changing health care environment. This work is proposed to be completed within the current footprint of the Melrose-Wakefield Hospital campus.

As initial steps to begin the process, hospital leaders have had preliminary discussions with Melrose city officials and residents whose homes are close to the hospital’s facilities. Continued dialogue with the City, regulatory authorities, physicians and abutters is planned throughout the permitting and construction phases.

“We look forward to refining our vision through a collaborative process with the Melrose community and with our neighbors,” said Michael V. Sack, president and chief executive officer of Hallmark Health. “The role of Melrose-Wakefield Hospital is changing. These plans will revitalize the Hospital’s infrastructure and allow us to better serve the regional needs of our communities.”

The first phase of the improvements calls for the establishment of three surface parking lots (two on Porter Street and one on Rowe Street). To make room for these lots, eight houses currently owned and used by Melrose-Wakefield Hospital will be removed. The development of these new lots will take into consideration neighborhood esthetics, traffic and other needs and will be thoughtfully landscaped with a variety of shrubs, trees and other foliage, fencing, stone walls and seating, all of which will be used strategically to serve as natural sound and sight barriers. Although specifics have not been defined, the lots are expected in these early stages to accommodate approximately 100 cars.

The proposed lot on Rowe Street would be situated directly across from the hospital’s emergency department. Currently there is no dedicated lot for emergency department patients or visitors, which causes circling of the roads surrounding the hospital or using on-street neighborhood parking as concerned family members seek to quickly join their loved ones.

The estimated cost of this proposed first phase is roughly $5.3 million and, following the local permitting process, is targeted to begin in the spring of 2015.

Subsequent phases of the proposed project include removing the current parking garage and constructing a new one in hospital space in front of the Medical Office Building (see image). Preliminary concepts of a new, state-of-the-art patient care wing are being considered. This proposed wing would be constructed on the site of the current parking garage. Additionally, the final phase would include construction of the new patient care wing and renovations to existing patient care space to better accommodate and care for patients in critical care, maternal and infant care and emergency services.