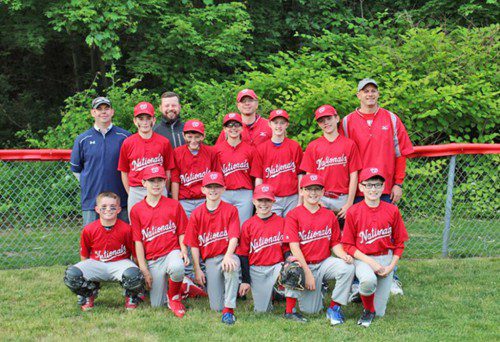 Semi Finals Nationals 8, Reds 4. Ella DeCecca powered the Nationals to victory with a three run homer in the bottom of 5th to put the National up for good and 8-4 victory. Liam McCall and Michael Overlan pitched a good game for Nationals striking out 10 and only giving up 6 hits. The Reds counter with excellent pitching from Tyler Tobin who struck out 7. The Reds got on the board first with offense from Nate Dowell, Richie Ciulla, Will Dugan and Will Schein. The Nationals had a balanced offense attack lead by Ryan Constantino, Aidan Pacor, Braden Fitzpatrick and Matt Tarpey. The defense for the Reds was led by Matt Schwarze, Owen Spencer AJ Norton Jefferson and Hannah Connolly. The Nationals defense had contributions from Jaret Crockwell, Katie Tarpey Sean Thomas. The catchers for each team Ethan Witkowski and Jay Donahue were excellent behind the plate all night.

Final game Saturday June 20. Nationals 6, Astros 2. On a wonderful summer evening a great baseball game was played in 1 hour’s time with the Nationals edging the Astros 6-2 for the Championship. The Nationals were led on the mound by Michael Overlan who struck out 8 and Aidan Pacor who closed the game by getting the last 2 outs in the 6th inning. Not to be outdone, Peter Santos pitched a complete game for the Astros striking out 4 and not walking a batter. The Astros scored first with timely offense from Colby Moss, Leonardo Velasquez, Nick Sasso, Max Brown and Jude Douglas. The offense for the Nationals had many contributors including Liam McCall, Aidan Pacor, Katie Tarpey Ryan Constantino and a big night from Sean Thomas. Defense on both sides was excellent with well-executed plays by the Astros Jacob Pearl, Dylan Driscoll, Sam Chetkin, Ben Lessor and Andrew Beauchesne. Once again the Nationals’ catcher Ethan Witkowski did an excellent job behind plate for the entire game.

National League Padres vs. American League Rivercats. In the opening round of the City Series Minor Division playoff tournament, the Melrose National Padres defeated the Churchill American Rivercats in a close, well played six inning game. Rivercats got on the board in the first inning behind a solid hit by Paul Nault. Padres pitcher Michael Thomas and catcher Nicholas Hitchman combined on a great defensive play to throw out a Rivercat runner at home, also in the first. Thomas added a hit at the plate and struck out five batters on the mound, while Hitchman added two hits and scored twice for the Padres. The Rivercats added to their lead in the 3rd and 4th innings, taking a 4-0 lead behind hits from Jake Skane and Jonah Peters, and great at-bats by Ethan Geissler, Patrick Strafford and Quinn Fogarty. Leading the charge defensively for the Cats was ace pitcher Ryan McGuinness who kept the potent Padres line-up off balance all night, striking out 8 over 3 plus innings of work. Roddy McGuillicuddy also pitched well in relief for the Rivercats, striking out 6.

Down in the bottom of the 4th, the Padres attack came to life as Hitchman scored the first Padres run, soon followed by a run from Colin Walsh. Slugger Johnny Biblios knocked in CJ Moriconi and Max Johnston with a clutch RBI single and the game was suddenly tied. It remained tied over the next inning and a half behind the fine Padres defensive efforts of Chase Auld, Karden Auld, Jimmy Biblios, Steven Edwards, Lucas Donahue and Darel Parent. In a clutch performance of pitching and hitting, Padres team captain CJ Moriconi took over the final few innings of the game. Pitching in relief, Moriconi struck out 10, including 8 of the last 11 batters he faced. With the game tied in the bottom of the 6th inning, Moriconi launched a rocket deep to right field, scoring Hitchman with the winning run, as the Padres walked off with the 5-4 victory, advancing the Padres to the Minor Division City Series semi-finals.