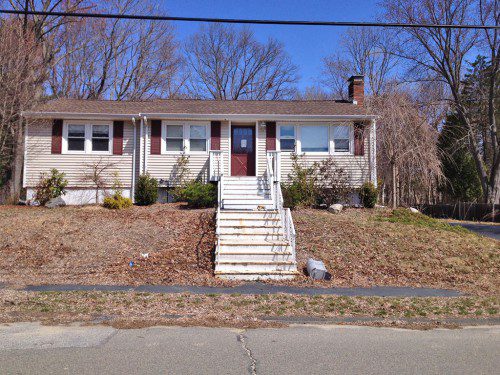 AT A BOARD OF APPEALS HEARING, the applicant withdrew a petition to relocate this house at 17 Anthony Rd. in the face of neighborhood opposition. (Bob Turosz Photo)

NORTH READING – A crowd of over 30 residents from the Peter and Anthony roads neighborhood, along with some from Andover, turned out for a Zoning Board of Appeals hearing Thursday night, expressing opposition to a variance to relocate an existing house in the neighborhood and gift it to the town as an affordable housing unit in perpetuity.

The applicant, Joseph Germano and JCJ Realty Trust, also plans a six-lot subdivision located behind the home at 17 Anthony Rd. That proposal will be submitted for approval to the Community Planning Commission in the near future.

At the beginning of the hearing, Board of Appeals member Joe Keyes explained to the audience the only matter before the ZBA that night was the variance to relocate the house, not the proposed subdivision. Germano’s other option is to simply tear down the house and use the lot at 17 Anthony Rd. and build the road into the new subdivision.

After 90 minutes or so of discussion, Germano’s attorney, Richard O’Neill of Tewksbury, suggested Keyes poll the audience. In a scene that looked like it came out of Town Meeting, every hand went up in opposition, after which O’Neill and Germano withdrew the request for the variance.

“Our goal here tonight was to have a communication with those most affected by this project, those abutting this property and the subdivision.” If the majority are opposed to the variance, O’Neill said they would withdraw.

Keyes said he would consider objections from the direct abutters more heavily than those who live in Andover but that really didn’t matter much because opposition was unanimous and the ZBA voted 3-0 to allow the variance to be withdrawn.

The neighborhood residents were not opposed to the variance because Germano proposed to give the house to the town for affordable housing. The direct abutters to 17 Anthony Rd. were opposed because the proposed variance was to turn the house sideways on the lot in order to make way for the new road, which they felt would look “silly” and out of place in the neighborhood. The direct abutter on the left side of the property would have been left staring at the back side of the relocated house and the others did not see any type of buffering that would make the problem less objectionable.

Other objections were raised about wetlands and poor drainage in the neighborhood. Mary Lou Dysart, 40 Anthony Rd., said before the ZBA makes a decision, they should drive down Anthony Road and they’ll see “every single house has at least one sump pump, maybe two. There are hoses coming out of practically every house.”

“Like most people here, I would prefer not to see any development at all,” said Dysart. But she thought it would be “a littler gentler” to the direct abutters of 17 Anthony Rd. if Germano forgot about turning the house sideways and just put the new road straight through. That, at least, will give the abutters some privacy, she stated.

Kenneth Lanier, from Cornerstone Land Consultants, working for Germano, said he is aware of the neighborhood’s drainage concerns and these will be addressed when the subdivision proposal is heard before the CPC, he added. Lanier said he’s still going to address the drainage concerns. “I’m going to try to fix all of your issues. I’m not going to make them worse, let’s put it that way.”

“We shouldn’t even be here,” said Ed Sapienza, 25 Anthony Rd. He recalled the history of the site, which is also off Haverhill Street and backs up to the Andover town line. He recalled a 1983 proposal to build 228 low and moderate housing units on the property, which was turned down. He said there was a 1986 understanding that land would not be subdivided again. Most of the people at the hearing are newcomers, he said. “We shouldn’t be negotiating anything.”

Atty. Luke Legere, representing the residents at 346 Haverhill St., said the variance requests meets none of the three criteria needed to issue a variance. A self-imposed hardship cannot qualify for a zoning variance, Legere argued, “and this is a textbook example of a self-imposed hardship.” Legere’s arguments were similar to a letter submitted in opposition by an abutter, Donald Wahr of 1 Seneca Cir., Andover.

In a unanimous vote early in the evening, the ZBA approved a special permit home occupation request from Gillian Baudreau, 40 Hickory Ln., for an event planning business at her home. Baudreau said she does mostly weddings but is starting to get into corporate events.

The ZBA attached the standard conditions to the permit: No one other than Baudreau to be employed there, no signs or display of goods visible from the exterior of the home, not more than 300 sq. feet in the house devoted to the business use and no customers coming to the premises. The permit is good for four years and is not transferable to another person.