Published in the October 8, 2015 edition 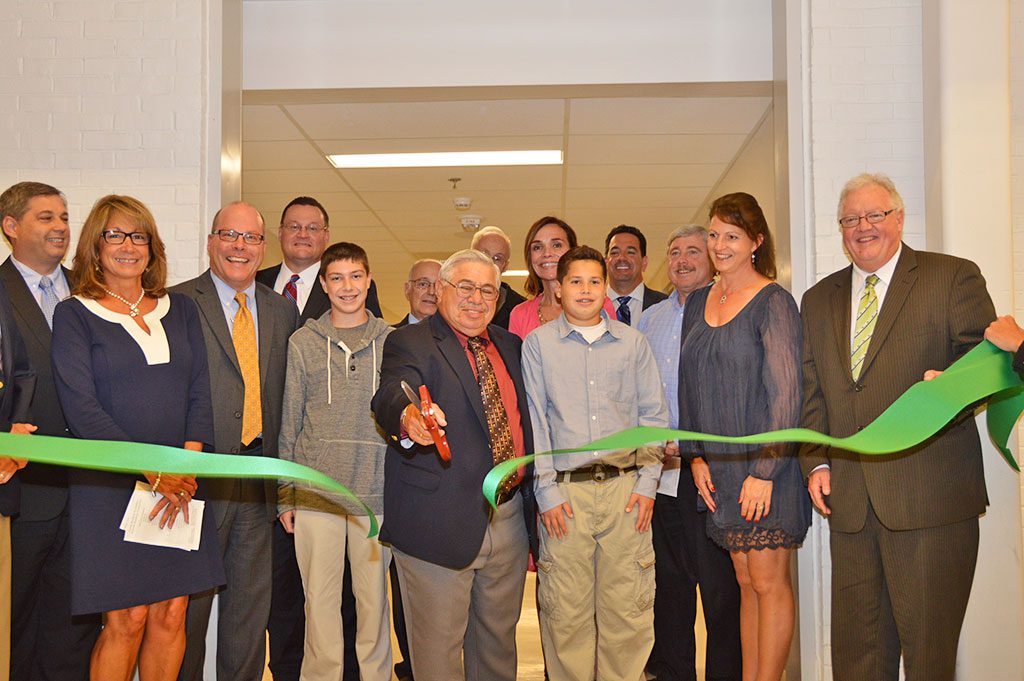 The Sept. 30 grand opening ceremony marked the completion and the successful opening of the new North Reading Middle School, one year after the new high school opened and three years after the first ceremonial shovel touched dirt in 2012. There were plenty of obstacles to overcome along the way, including a $15 million cost overrun that required town voter approval for additional funds in 2013.

All the pieces were in place for a successful dedication Sept. 30, including over 100 people in the Daniel Shay Performing Arts Center, inspiring musical performances from North Reading students in grades 5 through 12 and remarks and speeches from state and town officials and educators.

More than one of the evening’s speakers noted that the festivities were held in nearly the same spot where the groundbreaking took place in 2012.

“These two new schools are a wonderful testament to the community of North Reading and its young people,” said Superintendent of Schools Jon Bernard. “They are a tremendous symbol of support for our most precious resource, our children. And this speaks so highly of this town and its citizens, that you have great hope for the future and wish to ensure that our students have what they need to make a difference in the world. I pledge to you we will take full advantage of the opportunity you have provided to us.”

State Rep. Brad Jones Jr., who graduated from the original Junior High School (as it was then known) in 1980, said the words that come to mind in viewing the building are “amazing, awesome, impressive and outstanding.” He urged the students to take advantage of all the opportunities they’ve been given.

Jones joked that his two children are also thrilled with the new school because they’ll no longer have to listen to their father tell endless stories about the old school. “I tell them, just make the most of it. There are so many opportunities here, take advantage of it. Some day, in the future, down the road, there will come an opportunity for you to invest in the future of your children and grandchildren. And hopefully this beautiful building will serve as an example” for his children’s generation and what their answer should be.

Sen. Bruce Tarr said the successful completion of the project shows North Reading is a community that has dedicated itself to the proposition that every single child deserves an outstanding education. “This night is an incredible time to celebrate the legacy of education that North Reading has built, year after year and decade after decade and which takes another major step tonight.”

“This is why I get up in the morning,” said Jack McCarthy, executive director of the MSBA, which contributed $49 million of the project cost. He quoted Benjamin Franklin, who once said, “An investment in education pays the best interest.” The MSBA is proud to be North Reading’s investment partner, he said.

Selectmen Chairman Robert Mauceri commented that opening a new school is a once in a lifetime occasion for most people and noted the original junior high school (later the middle school) opened 50 years ago. He thanked the SSBC for bringing the project to completion on time and the voters for twice voting funds for the project.

“Growing up, many of us would search to discover our own special gifts,” said School Committee Chairman Janene Imbriano. “The Secondary Schools Committee has given us the opportunity to find our gifts.”

In declaring the new school open and inviting everyone to the ceremonial ribbon cutting in the Main Street corridor, Principal Catherine O’Connell, said she is “forever grateful we were able to come together as a community and support this project for our kids.”

After the ribbon cutting, everyone in attendance was invited to take part in self–guided tours of the new facility which, together with the new high school, will stand for decades as a visible symbol of the town’s support for education.