New residents get a town primer 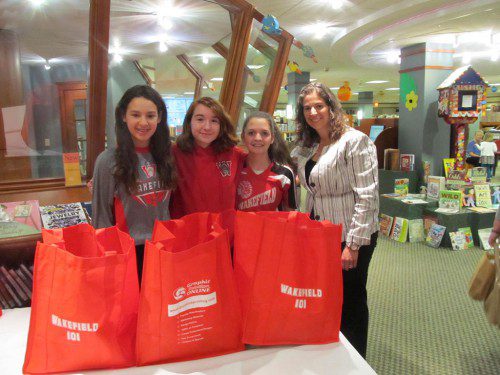 HELPING TO PASS out tote bags filled with items newcomers to Wakefield might need were, from left: Elianna Cohen, Casey MacGibbon and Nicole Calandra. All three girls are members of the Junior Honor Society and attend classes at the Galvin Middle School. They are shown with Wakefield Lynnfield Chamber of Commerce Director Marianne Cohen. (Gail Lowe Photo)

WAKEFIELD — What do Southern California, the United Kingdom, Ireland and Somerville have in common?

These are all places where Wakefield’s newest residents used to live. And last night in the conference room at the Beebe Library and other spaces in the lower level, they got to meet their neighbors, talk to town and school officials, Patrol Officers Steven Skory and Amy Toothaker, Fire Chief Michael Sullivan, Executive Director of the Wakefield Lynnfield Chamber of Commerce Marianne Cohen, Alison Mehlman from the Board of Health, representatives from Mass In Motion, Judy Luciano from the Senior Center, Human Rights Commission, Friends of Lake Quannapowitt, Patrick Sullivan of the Independence Day Committee and Catherine McDonald and other librarians at the Beebe.

There were bags with giveaways such as water bottles from the Police Department, rubber jar openers from the Hartshorne House, pamphlets describing the various services offered throughout the town and so much more.

One couple — Andrea and Brent Lutes — just moved to a home in Greenwood six weeks ago. Formerly of Southern California, they are now settling in nicely with their 2-year-old daughter Sydney. The couple are expecting their second child – a boy – in July.

“We have a yard now,” said Andrea. “We love Wakefield.”

Another couple bought a home near Crystal Lake. Formerly of Somerville, Amy Sullivan and David Barkhouse said, “So far, so good. The people in our neighborhood have all been so welcoming.”

One other couple who agreed to talk to a reporter from the Daily Item came from the United Kingdom and Ireland in 2014. Megan and Liam McDonnell first lived in Woburn when they arrived in the United States but learned quickly about the wonders of Wakefield and decided to buy a home on Pleasant Street. “We’re halfway between the Dolbeare School and Lake Quannapowitt,” Megan said. Her husband’s job brought him to the U.S. and they are loving living in America.

“We couldn’t be happier,” she said, giving her infant son Cian a little hug. “There’s a lot to like about Wakefield. We’re very happy here.”

“I first heard about a similar program through a former employee,” said McDonald. “She told me that a welcoming program had been done in Wilmington. I checked into it, and here we are tonight – Wakefield 101.”

By the looks of things, the evening was a success. More than 100 people were counted coming through the Beebe Library doors.