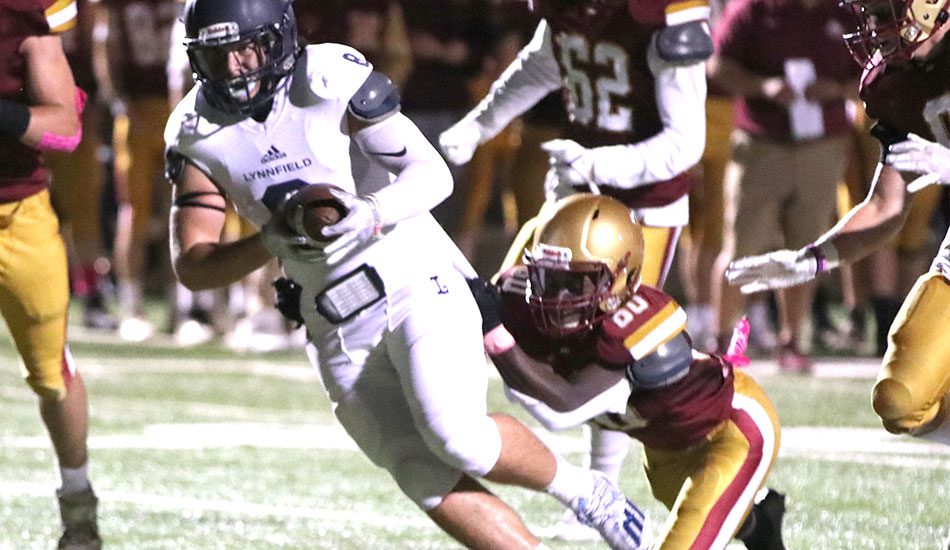 NEWBURYPORT — As we saw in Lynnfield’s last game against Ipswich on Sept. 24, when momentum shifts your way, you can ride that wave to victory. When it swings the other way though, it can go south very quickly.

Last Friday night, the 2-0 Pioneers would learn this tough lesson when they traveled to James T. Stehlin Field for their first road test against 2-1 Newburyport. Before the tide turned, resulting in a 34-6 Clipper victory, the first half would be a tight one.

The Clippers received the opening kickoff at their own 34-yard line and began their march towards midfield. A 12-yard pass over the middle got the Pioneers defense on their heels early but would not shake them.

For the first time in program history, Lynnfield began their season with back-to-back shutouts and the defense was not ready to go down without a fight. On a 3rd and 5 the Pioneer defense continued to stand strong when James Sharkey and Jack Phelps knocked down a Peter Sullivan pass.

A well-executed Newburyport punt pinned the Pioneers at their own 7-yard line. A 7-yard Spencer Riley (6 carries, 11 yards) got Lynnfield out of the hole. On 3rd and 2, senior quarterback Nick Razzaboni (7-16, 57 yards, 1 touchdown) threw a swing pass to his left for Joey Cucciniello (2 catches, 5 yards) who moved the chains after the 4-yard pickup. That was as far as they would go though.

Following a 3rd down stop, Lucas Stallard set the Clippers up in prime position following a 32-yard punt return. Newburyport set up shop from Lynnfield’s 24-yard line and quickly found themselves in goal-to-go position following a Peter Sullivan 3rd and 3 scramble. To this point in the season, the Pioneer defense had yet to surrender a single point.

For the first time in 103 minutes and 36 seconds though, the streak would come to an end. Lynnfield sent a heavy blitz on 2nd and goal, but Sullivan would beat them on a quick pass to his right hitting Grant Mosesian for the 8-yard touchdown. After the PAT the Clippers would lead 7-0 late in the first quarter.

JAMES SHARKEY rumbles down the sideline for a 49 yard gain on Friday night in Newburyport. (Kristine Marengi Photo)

The remainder of the first half would be a battle for field position as both defenses dug their heels in. With 2:03 left in the 2nd quarter, Lynnfield’s offense finally found some footing. Facing 3rd and 6 from their own 33-yard line. Razzaboni kept the drive alive when he dumped it off to James Sharkey who turned the screen pass up the field for a gain of 22. For the first time all night, the Pioneers would snap the ball on the plus side of the field. That was as far as they would go though following three straight incompletions.

“Their pursuit was very effective,” commented Lynnfield head coach Pat Lamusta on the Clipper defense. “Hats off to coach Smolski…we wanted to get the run game going and when you can’t, you feel like you’re always behind schedule.”

The Pioneers got the ball to start the second half but quickly found themselves again behind schedule. On the first snap of the 3rd quarter, a Newburyport blitz forced Razzaboni to throw an errant pass which landed in the hands of defensive back Evan Landry for the interception.

With momentum on their side, Newburyport took over at Lynnfield’s 38-yard line and would not squander the opportunity. Following pass completions of 11 and 12 yards, the Clippers were knocking on the door. From the 13-yard line, Sullivan followed his blockers up front before darting towards the left pilon to extend Newburyport’s lead 13-0.

At the moment the Clippers had a firm grasp on the momentum, they were soon going to have a stranglehold. On the next series, another Razzaboni throw would be picked off after getting tipped in coverage. Three plays later, Sullivan would once again call his own number and run it in from 8-yards out.

After scoring two times barely three minutes into the second half, Newburyport looked like they would cruise to their third win of the season. The Pioneers would not go down without a fight though.

Facing a 3rd and 13 from their own 26-yard line, junior running back James Sharkey (3 carries, 53 yards) took the handoff and made some magic. The back hit the hole hard before quickly pivoting left to avoid the oncoming linebackers. Sharkey saw some daylight and exploded up the left sideline to extend the drive and pick up a gain of 49 yards.

Three plays later, Razzaboni stood in the pocket and hit junior receiver Sam Gazit (1 catch, 20 yards, 1 touchdown) who carried a host of Newburyport defenders into the endzone with him.

Despite finally getting on the board, that would be all the Pioneers could muster up before losing their first game of the season 34-6. The schedule does not get any easier for Lynnfield as they head into the meat of their Cape Ann League schedule. If the Pioneers want to get things back on track it starts next Saturday afternoon when they travel to Hamilton Wenham for a matchup against the 3-1 Generals.

“I think it was a wakeup call for us a team,” stated coach Lamusta following the loss. “They fought pretty hard tonight but they went up against some great competition so we got to make sure that next week it’s better because the games don’t get easier.”