Newburyport squeaks past Hornets in OT, 29–27 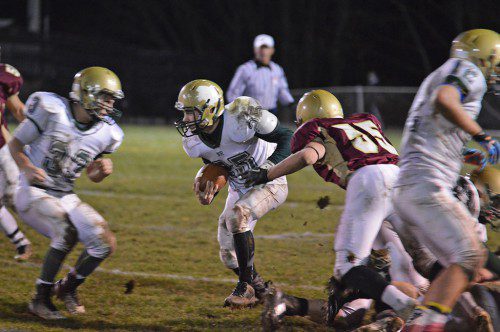 NORTH READING – For the second time this season, North Reading gave the Newburyport Clippers all they could handle, this time on their home turf, last Friday night in Newburyport. North Reading outrushed the Clippers by a margin of 3 to 1 and led, 21 to 14 with 9:25 left in the game. But as so often happens when these two teams meet, Newburyport found a way to win, 29-27 in overtime.

Four quarters of hard-fought football ended in a 21-21 stalemate and both teams scored a touchdown in overtime. But while Newburyport successfully passed for the OT two point conversion, North Reading’s attempt to rush it in was stopped at the 1 yard line, giving the Clippers a dramatic two-point victory on their senior night.

Throughout the night, the Hornets rotated carries among their four horseman: Sophomores John Merullo and Matt McCarthy and juniors David Smith and Nic O’Connell. As with most games late this season, top gains went to Smith with 238 yards on 27 carries and a touchdown including gains of 45 and 33 yards. Coaches turned to O’Connell more than in any other game this season and were not disappointed as he had his first career multi-touchdown game with two on only eight carries totaling 82 yards. McCarthy posted 67 yards on 18 yards but seemed to pay the price more than any player for each yard gained. Merullo displayed his typical eye popping cuts and moves amassing 25 yards on his nine carries.

On the other side of the ball, on a defense normally dominated by names like Mike Farrelly, Nic O’Connell and Cole Hughes, the Hornets had season defining performances by Junior Nick Copelas, sophomore John Merullo, and junior Chris Vella even though the defense never stepped on the field in the third quarter. Normally a staple on specials, Copelas racked up a team leading seven tackles including two huge long play defenses similar to the season highlight pass defense he had last week in the end zone versus Pentucket. Merullo was close behind with five tackles including a pair of hits stopping Clipper drives late in the game. Although the stat box shows only one tackle, Chris Vella had the best and most critical tackle of the night with a dramatic sack early in the fourth quarter when it looked like the Clippers were going to sail into the end zone.

The game was slow to start with each team forced to punt on their first possession. After the first quarter was scoreless, the Hornets had the ball on second and five from the Clipper 15.   Coach Chuck Campobasso turned to his beefy linemen and fullback to serve up the “wedge.” Junior fullback O’Connell took the direct snap from Michael Quaratiello and then put his hand on the sophomore center’s back for five yards as Quaratiello, Dean Arena and Bobby O’Donnell drove the heart of the Clippers defensive line back a full five yards before O’Connell had to do any work. At that point, as the big fullback found some space, he got hit on the 5 but rumbled another couple yards before being hit again and then dove into the end zone as he was hit again by another Clipper. Junior Angelo DiSanto continued his huge season delivering the extra point capping off the eight minute drive by and giving the Hornets the 7-0 lead with seven minutes to go before the intermission.

But as they would all night, Newburyport came back before the end of the half to tie it on a seven yard pass from quarterback Mike Shay to JJ Bajko.

North Reading received the ball to start the second half and launched a long drive that ate up almost eight minutes on the clock with a 12 play drive ending when sophomore Matt McCarthy took it in from the 2 yard line at with 3:44 left to play. The conversion kick failed and North Reading led, 13 to 7.

The problem for North Reading and the mistake that may, in the end, have cost them the game, came on the ensuing kickoff, which Newburyport returned for 70 yards to put the Clippers back on top, 14-13. The Hornets responded with another long drive and fought their way down the field, retaking the lead with 9:25 left in the fourth quarter on fourth down, with a six yard run by junior David Smith. Up 19 to 14, Head Coach Jeff Wall knew that lead wouldn’t hold up the way things were going and so the Hornets went for the two point conversion, with Smith taking it in to make the score 21 to 14.

North Reading’s squib kickoff went out of bounds at the 45 yard line, handing the Clippers golden field position which they took advantage of to drive to the North Reading 18. But there the Hornet defense stiffened and stopped the Clippers cold. The Hornets took over on downs at 4:47.

Newburyport got the ball back with three minutes to play and launched a long drive of their own, going 66 yards to tie the game at 21 with 1:14 left.

Newburyport was flagged for several penalties in the game and one of them gave the Hornets the ball on the 12 yard line with eight seconds left. But the Hornets’ attempt at a 30 yard, game–winning field goal into the breeze was wide left, forcing both teams into overtime.

For the Hornets, Smith had 199 yards on 25 carries, sophomore John Merullo carried 10 times for 41 yards, McCarthy had 93 yards on 16 touches and O’Connell gained 48 yards on eight carries.

After the game, Wall and his coaches told the Hornets they played a great game.

“All we asked of them was to play with heart, courage and pride and they did. They would not go down without a fight. I couldn’t be more proud of them,” said Wall. The Hornets matched Newburyport hit for hit in this game and at the end the Clippers knew they were fortunate to win. “I know the seniors felt they came up short but they definitely left a piece of themselves out here on this field today.”

Wall acknowledged the Newburyport kickoff return hurt. “We had some special teams issues today. There are some things we have to clean up. We just have to get better at that.”

The loss drops North Reading to 4-6 on the season and undefeated Lynnfield looms on the schedule for Thanksgiving Day.

“If we play them like we played tonight, we’ll be in good shape,” said Wall.