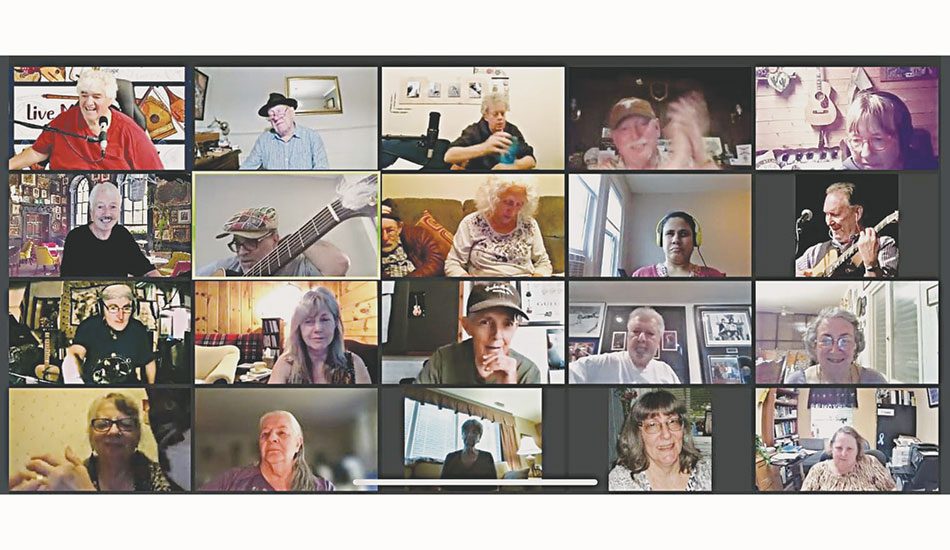 A TYPICAL  North Reading Community Coffeehouse Open Mic over Zoom features 20 musicians and their fans from all over the world. Art Grossman is in the upper left corner. (Courtesy Photo)

NORTH READING — The first of two live performances from artists who have been regularly featured at the North Reading Community Coffeehouse (NRCC) happens next Saturday, July 31 at the gazebo at Ipswich River Park, 15 Central Street, beginning at 5 p.m.  The second show will be held Saturday, August 21 at 5 p.m. Both are free. There is no rain date so organizers hope the weather will be good.

Coffeehouse organizer Art Grossman has been running things virtually through the internet since the Flint Memorial Library’s Activity Room was closed at the outset of the COVID-19 pandemic — at times, as often as three nights a week!

This flurry of musical content and Grossman’s dedication, attracted attention. As virtual coffeehouse-type performances became commonplace on the web, Grossman began attending others – both locally and around world – sometimes as an audience member but often as a performer. Each time he did this he would leave information for others about how to listen or appear on the virtual North Reading Community Coffeehouse.

Grossman arranged the July 31 concert with the help of the North Reading Department of Parks and Recreation. “There’ll be great country, blues, rock and roll, American standards and folk music,” he said.

“North Reading Community Coffeehouse came about from an idea I had in 2016 when I approached the Dan Tremblay, the Assistant Director of the Flint Memorial Library, and spoke to him about doing something where we would bring live music into North Reading and surrounding communities by hosting an open mic once a month in the Activity Room,” Grossman recalled.

“It would be free to the public but through sales of refreshments and donations, we would also hopefully raise some money for the Friends of the Flint Memorial Library, who help to support the many activities and programs the library offers to the community.”

Tremblay and Grossman discussed this with the Friends of the Flint. They liked the idea and in April 2016, the NRCC had its first “open mic.”

After four years of success and growth of the coffeehouse series, COVID-19 stopped it in its tracks. “In February or March of 2020, the library, and therefore the Activity Room, shut down, and no one had any idea of when it might open again,” recalled Grossman.

“Not sure what to do, I spoke to my son Dave and he suggested taking the live open mic and moving it to a virtual environment using the relatively new Zoom technology. This would allow everyone to abide by the quarantine and social distancing rules we all were living under, masks were not needed, and the music could continue!”

“I decided that in these times we were living under, where we were essentially living in seclusion, as people, we need as much interaction as we could get to keep our sanity,” he said.

“One of the real joys of these VOM’s (Virtual Open Mics) is that we have been able to do joint collaborations with other groups. We have done several with Jerusalem Folk Music evenings. Each “side” brings in an agreed upon number of performers and we alternate and introduce new talent to each other.”

Grossman was also introduced to the Cambridge, England Folk Club which he says, “has also been around forever. I believe I was told that Paul Simon played there in the ‘60s. I started to attend the Cambridge Folk Club and met Marion Treby, Calvin Monk and Robin Mansfield who run that great open mic. I was honored when they invited me to do a feature set there.”

Putting NR on the map, virtually

As a result of attending all these virtual open mics and meeting so many people Grossman says, “I never would have had this chance had it not been for moving to the virtual world. The NRCC Virtual Open Mic now attracts people on a regular basis from places like England, Scotland, Ireland, Israel, Canada, California, Washington, Arizona, New Mexico, Texas, Pennsylvania, Maryland, Florida, Vermont, to name a few and of course, Massachusetts.”

“In some cases, people coming when the music start time is as late as 11 p.m., or in the case of Israel, 1 a.m.!” he said incredulously. It is not only performers that we get, but also people who just want to be part of the audience, and all of these virtual open mics really appreciate the support from the people who come to listen.”

Grossman says that musicians are starting to play out and also seeing those musician friends they have only seen as little squares on their computer or laptop.

“And with things opening up, like the Flint Memorial Library, we can see the good possibility of being able to resume our live monthly Saturday open mics in the not too distant future. In fact, dates have been booked in the Library Activity Room for September 25, October 16 and November 20.”

The impetus for presenting these two concerts at Ipswich River Park, according to Grossman, is to let music fans in North Reading and surrounding communities know that the NRCC has not gone anywhere.

“We just moved to virtual and now we are moving back. We look forward to seeing a lot of people there and we welcome the continued support we have received from the community,” he said.

Speaking for himself and the performers and fans of North Reading Community Coffeehouse Grossman, the musical impresario proclaims, “We strongly believe that whatever the ‘new normal’ turns out to be, that ‘virtual’ will continue to be part of our musical lives. Even if demand for virtual drops, we plan to do at least one virtual open mic a week, if for no other reason than to keep the wonderful friendships we all have made.”

The lineup for July 31

Entertainers scheduled to perform at this first concert are Michelle Abadia, The Lakeside Boys (Gene Doughty and Phil Leavitt), Mark Bishop Evans, Tim Foley, Kirsten Manville, Anne Sandstrom/John Loretz, Ric Page, and of course Art Grossman, himself. Concert-goers are encouraged to bring a chair and relax and listen. These events are free.