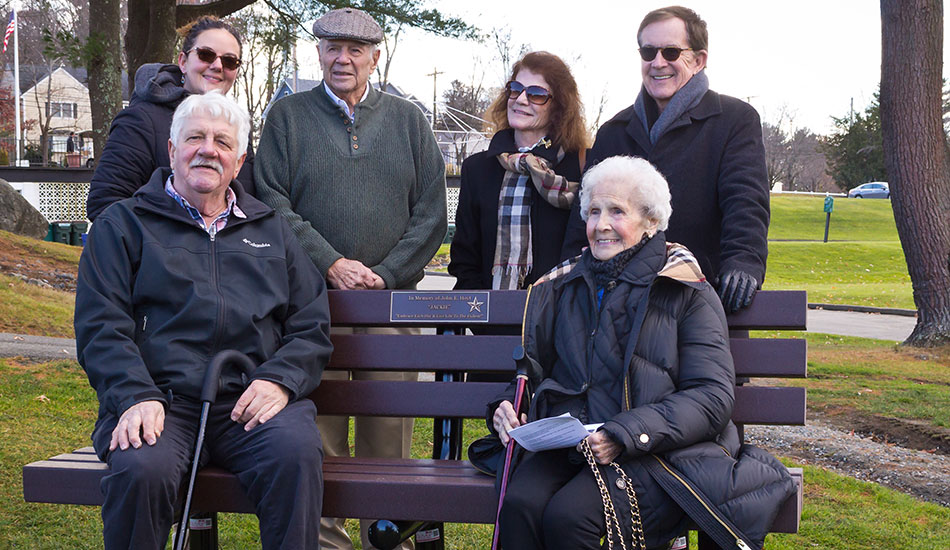 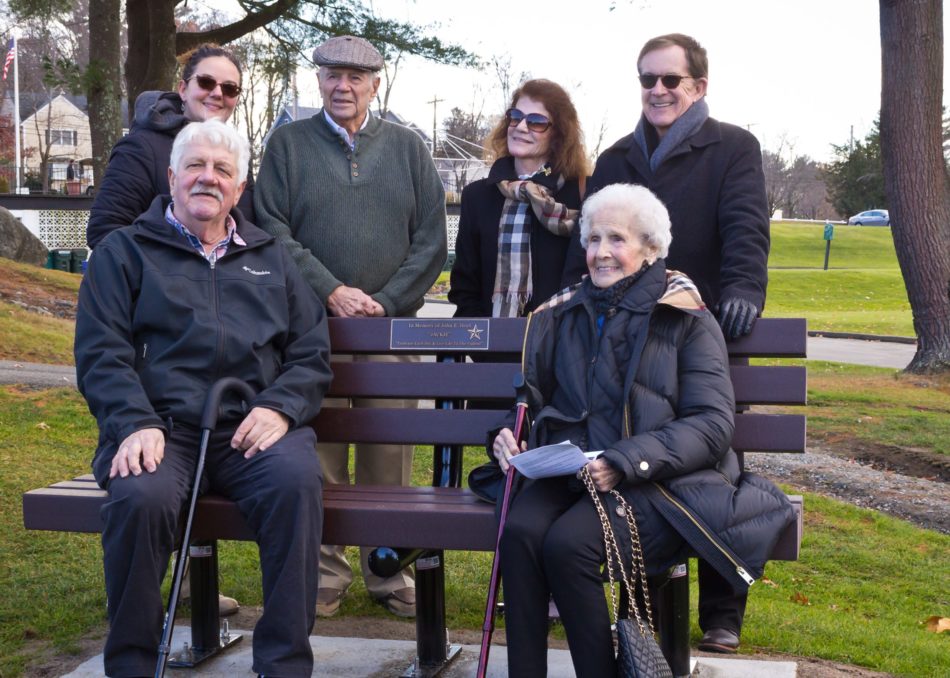 A PLACE TO REST. Family members gathered at the Hillview for the dedication of a new bench honoring the memory of Bronze Star recipient John E. Hoyt. Seated on the bench are John’s brother, Brendan Hoyt Jr., and mother, Sally Hoyt. Standing (from left): are his niece, Emily Hoyt; his uncle, John Marino; and his sister and brother-in-law, Sally-Jean O’Grady and Dr. Alan O’Grady. (Courtesy Photo)

NORTH READING — No doubt this golfing season, enthusiasts of the game have had an opportunity to take a rest on a newly installed bench located near the putting green at the Hillview golf course.

Hopefully, during their respite, golfers will take a moment to read the inscription on the bench and think about the man whose life’s works inspired it.

Family and friends of John Edward Hoyt gathered at the Hillview at 149 North St. at the end of last season to dedicate the new bench in honor of the Reading native whose love for the game began in childhood at the Hillview back when it was a private club – and he returned to golf here after completing two tours in Vietnam and remained dedicated to the facility throughout his life, more than three decades after it became a public facility owned by the town of North Reading.

The dedication ceremony at the Hillview celebrated Hoyt’s love of sports, country, community and family.

The son of Sally Hoyt, who celebrated her 100th birthday this month, and the late Brendan Hoyt, John passed away suddenly in 2019 at his winter home in Florida.

A lifelong resident of Reading who endured heart surgery as a child, John, who was also known as “Jack” and “Jackie,” was a gifted athlete, lettering in both football and baseball in high school. In 1965 and 1966, he was inducted into the Massachusetts Athletic Hall of Fame and the Reading Memorial High School Athletic Hall of Fame.

While in high school, Jack volunteered as a caddy at the Hillview Country Club where he learned the game of golf. His experiences here led him to pursue a lifetime of competitions and tournaments along the East Coast and Florida. 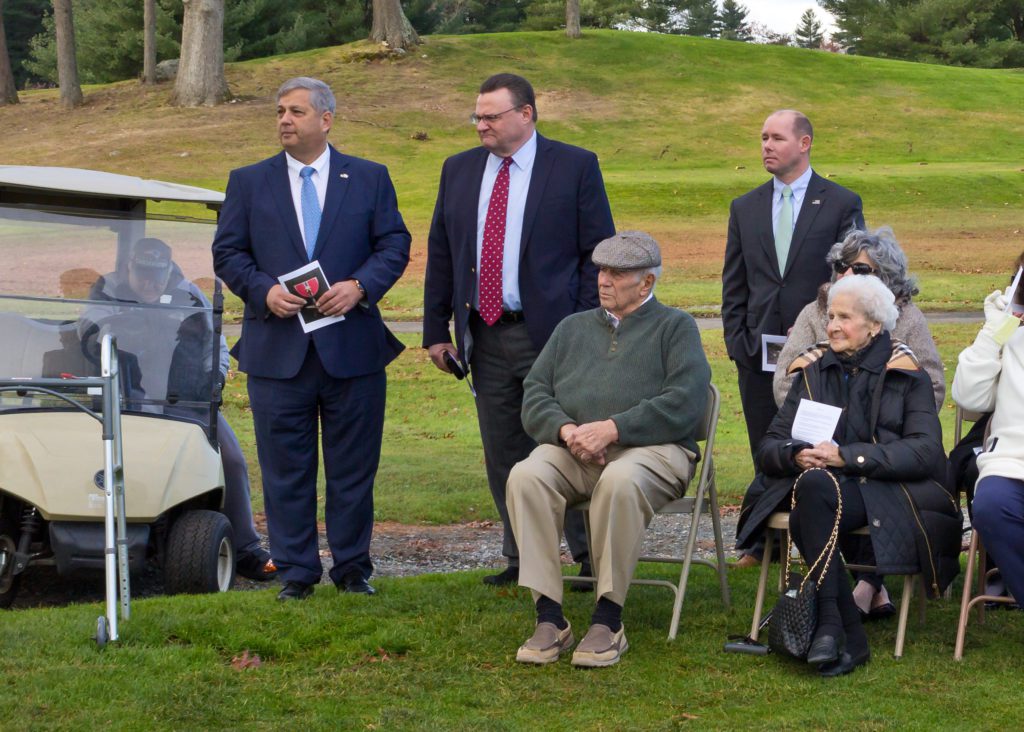 AMONG THE SPEAKERS at the dedication were (standing, from left): State Sen. Bruce Tarr and State Reps. Brad Jones and Rich Haggerty. Seated in the front row at right are John’s uncle, John Marino, and John’s mother, Sally Hoyt. (Courtesy Photo)

After his graduation from Reading Memorial High School in 1966, Hoyt joined the U.S. Army as a paratrooper assigned to the 101st Airborne Division. He served two tours of duty in Vietnam and was awarded four distinguished Military Medals of Honor for outstanding service to his country, including the Army Commendation Medal (ARCOM) for consistent acts of heroism and meritorious service, and the Bronze Star for Valor and heroic service in a combat zone.

In civilian life, John attended Graham College, studying both business and broadcasting, and built a life around golf in both Florida and Massachusetts.

At the bench dedication, Chris Carter, PGA Golf Pro at the Hillview, explained that John appreciated how golf enriches lives and the importance of getting outside to gain perspective while thinking about life and nature. Jack played at all of the club championships and often photographed golf events too.

State Senator Bruce Tarr (R-Gloucester, 1st Essex and Middlesex District) spoke about how Jack started out as a volunteer caddy at the Hillview and then served his country as a paratrooper. Sen. Tarr recalled that his own father became a caddy at about 8 years old on the Bass Rocks Golf Course in Gloucester and worked there until he joined the military in a different wartime era but following a similar path. Sen. Tarr referred to Jack as a “citizen soldier” who loved doing what he did in life, served his country and then returned to engage in other services that he loved, always making sure the Hillview was a place where we could think about our own self-improvement and enjoy the wonderful natural resources around us.

Sen. Tarr expressed hope that those waiting by the bench for their turn on the putting green will consider the legacy of Jack Hoyt as a great citizen soldier and also think about how wonderful life is and how wonderful golf is.

The brass plaque is simple yet elegant, and reflects Jack’s trademark enthusiasm. Alongside a Bronze Star is the following inscription: In Memory of John E. Hoyt – “Jackie” – “Embrace Each Day & Live Life To The Fullest!”

State Representative Brad Jones (R-North Reading, 20th Middlesex District) noted, as a bitter wind blew across the greens, that those gathered for the dedication had “cold hands but warm hearts” remembering Jack’s accomplishments. He recognized Jack’s mother Sally, also as a faithful servant to family, community, and the Commonwealth. Rep. Jones emphasized that it was important to recognize veterans every day of the year, not only Veterans’ Day, adding that it was an honor to be there with Sally Hoyt, her family and friends to dedicate this bench to her son Jack.

State Representative Rich Haggerty (D-Woburn, 30th Middlesex District) spoke about service as well, saying that when people come home from serving in the military they often spend the rest of their lives serving their communities. Haggerty noted that it was important to always recognize the nation’s veterans but it is special when people have an opportunity to see, feel, and touch a memory of someone’s life in their community. Rep. Haggerty thanked Jack for his service to his country, his two tours in Vietnam and his heroism. 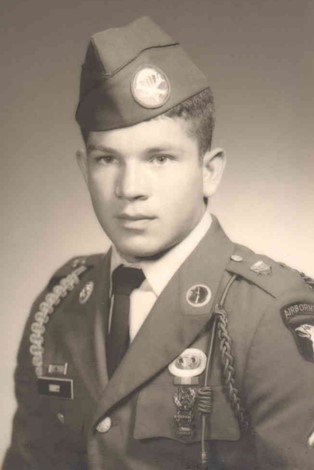 “He was good company”

North Reading resident George Stack, a founding member of the Hillview Commission in 1987 which oversees the operations at the Hillview, recalled first meeting Jack many years ago due to the many and varied capacities in which he had served the club over the years. Often they would run into each other at the Pro Shop where Jack would explain that he was “home to visit Mom.” George and Jack went on to play and win many tournaments together at the Hillview.

Stack commented that he “didn’t mind being the caboose on Jack’s engine.” Jack had a passion for golf and was always practicing and always telling people how to do better. George recalled that Jack even developed his own “contraption on a stick” to repair ball marks on the greens without having to bend over — that invention as well as helping people was Jack’s joy and brought him pride and satisfaction, he said.

“Jack was a great guy. I appreciated Jack. He was good company. What more do you want out of life than to be with someone who is good company?” George said, adding, “Years from now, people will be sitting here, see the brass plaque with his name and the Bronze Star, look out over the greens … and think of Jack.”