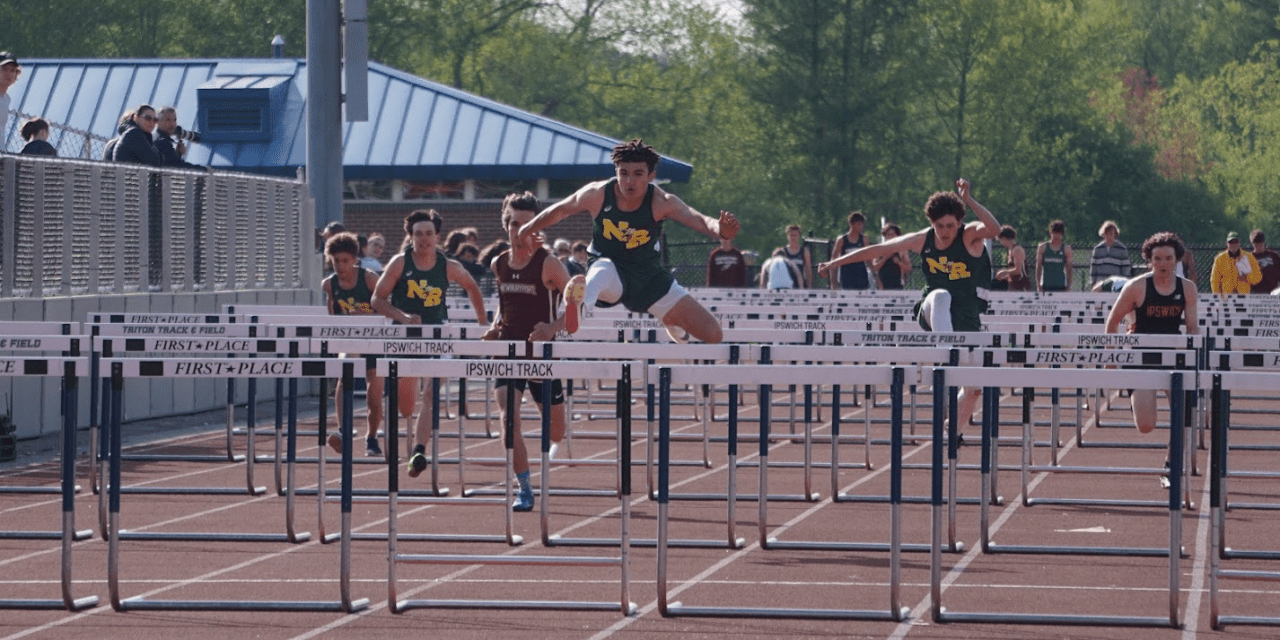 SENIOR CAPTAIN Spencer Beane competes in the 110 meter hurdles with senior Jacob Mikulski, sophomore Brandon Eng and freshman Nicolas Johnson in hot pursuit. Beane got 3rd in the hurdles after he took first in the 400 meters. (NRHS Track and Field Photo)

BYFIELD — The North Reading boys’ spring track team finished their CAL slate in style as they took home 2nd overall at the CAL Open Meet of Champions held at Triton High with a total of 101.5 points. Champion Newburyport scored 152.5 points to win the meet. The Hornets had a number of strong performances across the board and competed hard throughout the meet to take home the silver in the team event.

“We had an outstanding day today,” said Hornets head coach Ryan Spinney. “So many athletes stepped up and had either personal or season bests. Lots to be proud of and certainly a great tone setter for the Division 5 State Championship next week.”

Beane led wire to wire in the 400 Meter Dash to win the event in a personal best of 50.83, which places him second all time in NRHS history for the event.

“Spencer has been exceptional for our program throughout his career,” said Spinney. “It is so fitting that he was able to be crowned league champion in the 400 as he has ruled that event all season.”

Nadeau took home top honors in the 2 mile as he bested a very talented field to win the race in 9:57.45, a time that is 5th all time in NRHS history.

“Aidan had circled this race earlier in the year as the one he really wanted to win. He knew the competition would be fierce but he had no problem stepping up to answer the call. He ran such a tough, smart race. He will graduate as one of the finest distance runners in NRHS history,” said Spinney.

Carpenter repeated as the league Pole Vault Open champion with a height of 12’ 6”.

“Alex is a premier high school vaulter and has been an asset to our vaulting and sprinting program during his career. He will look to have a strong performance at divisionals and carry it to the Meet of Champions on June 4.”

Arden continued his winning ways in the Javelin as he repeated as CAL Open Champion in the event with a toss of 156’ 4”.

“Garrett’s rise in the event from his sophomore year through this year as a junior is absolutely exceptional. He works so hard and wants to refine his craft every single day. His dedication is easy to see and the results speak for themselves. A two time league event champion, especially as an underclassmen, is extremely rare,” said Spinney. 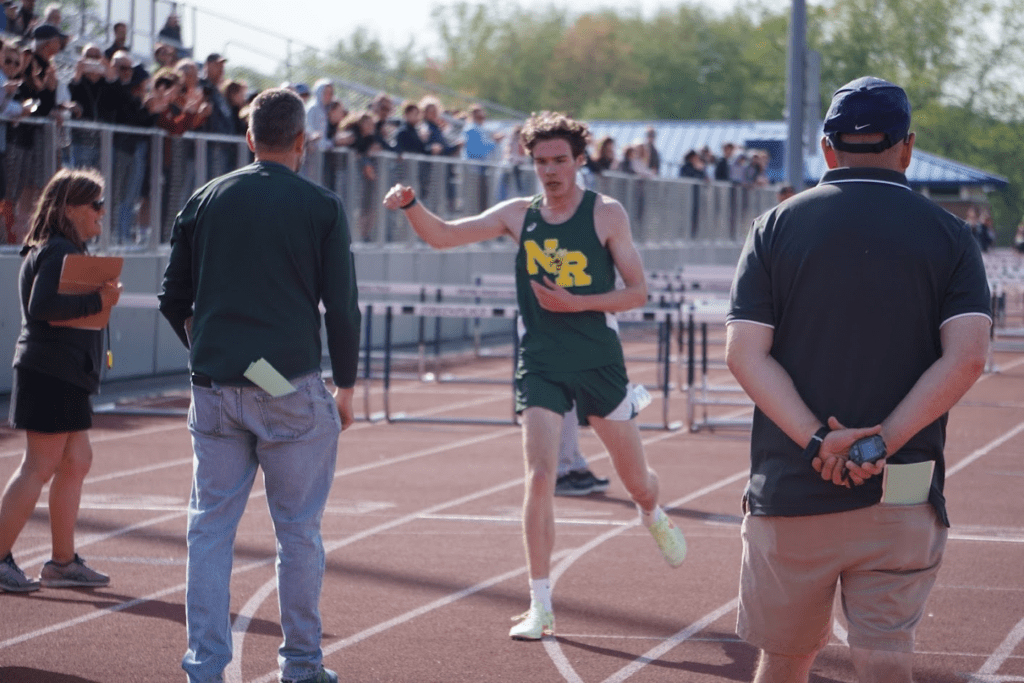 AIDAN NADEAU crosses the line first in the 2 mile at the CAL Open in 9:57.45. (NRHS Track and Field Photo)

Senior captain Casey O’Connor and junior Nathan Miller doubled up on medals as they both took 2nd and 3rd place finishes in multiple events. O’Connor took 2nd in the discus with a toss of 143’ 10” and 3rd in the Shot Put with a throw of 40’ 10”. O’Connor’s discus throw was 3rd all time in NRHS history.

“Casey has risen to be one of the finest throwers in our programs history and that is with only two years of experience. He works very hard and wants to be the best he can be. His performances speak for themselves and we are very proud of his accomplishments,” said Spinney.

“Nathan Miller is someone that every team would love to have,” said Spinney. “He works so hard, is so friendly and wants the best for all his teammates. His success this spring is well deserved.”

“John is a strong athlete across the board,” said Spinney. “He is primarily a hurdler but can do so much more. He had a tremendous run today and he is setting himself up for a strong state meet this week.”

Beane supplemented his 400 Meter Dash Gold with a bronze in the 110 Meter Hurdles.

“Spencer showed a lot of heart as he hit a hurdle mid race but came back strong and fought hard for 3rd overall. That just shows you about who he is and that he will fight until the end of any event.”

“A solid run by this group against quality competition. This was a good tune up for Divisionals as we will be going against teams of similar caliber,” said Spinney.

The 4 x 400 Meter Relay team of Jennings, Miller, Junior Brodie Mann and Beane also took 4th in a strong time of 3:39.74, the second fastest on the year for NRHS.

Senior Patrick Tannian had a tremendous day in the Discus as he threw a massive personal best of 115’ 5” to snag 4th in the event.

“Patrick was in the zone today,” said Spinney. “He was loose and just executed so well. Seeing how happy he was with his results just proves that if you relax and are confident, good things will happen.”

Fifth place finishers included Nadeau in the 1 Mile as he finished with a 4:44.13 to complete his tough 1-2 mile double. Jennings took 5th in the 110 Meter Hurdles with a personal best time of 17.04 and a great lean at the finish. Senior Sebastian Gonzales leapt his way to a tie for 5th place finish in the high jump with a jump of 5’ 8”.

“Seb is just a wonderful kid and is a talented athlete. We are so happy to see him succeed and for him to score at the league meet is a testament to how hard he has worked and how far he has come in his career. He is so very deserving of success,” said Spinney.

Tannian came back in the Pole Vault to snag a fifth place finish as he vaulted 10’ 0” in the event.

Sixth place finishers included Junior Michael Hemme who finished 2:08.66 in the 800 Meter Run and the 4 x 800 Meter Relay of Juniors Ben Meier, Christian DaCosta, Matthew Manupelli and Hemme finished with a season best time of 9:23.96 to pick up a point in the event.

“Lots to be proud of today,” said Spinney. “But we are looking forward to the state divisional meet, as we will certainly be in consideration for a strong finish in that meet.”

The Hornets will be back in action on Thursday, May 26t at Weston High for the first of the two day Div. 5 State Meet.