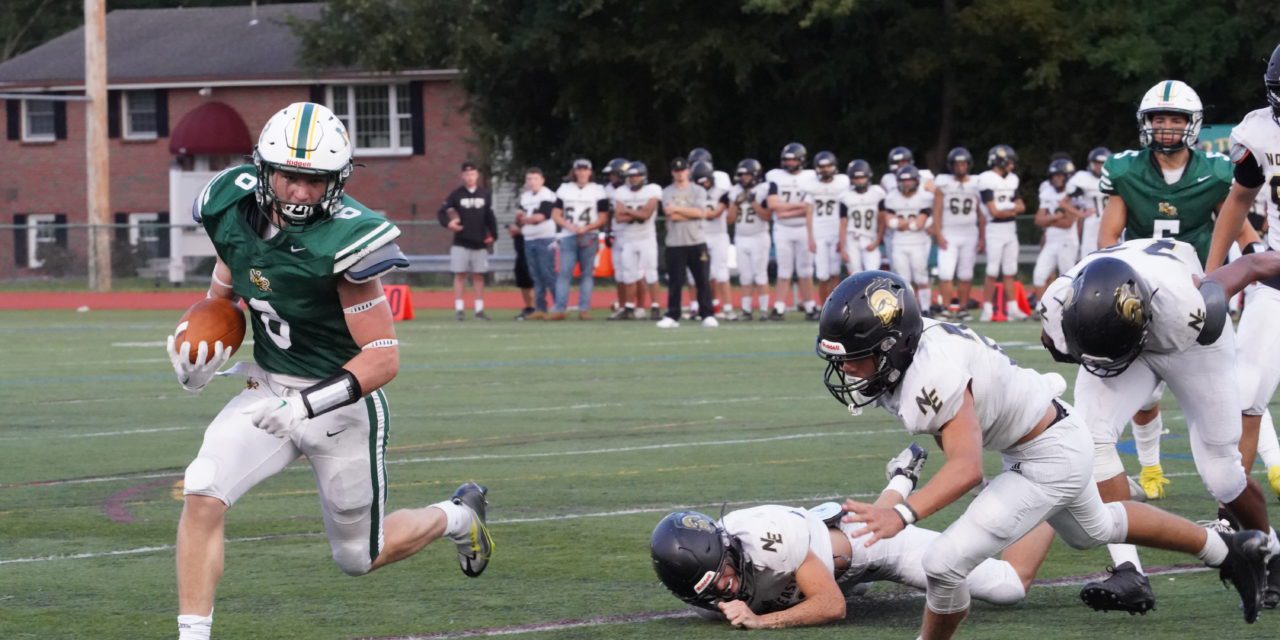 WILL BATTEN cuts up field to score one of his three touchdowns against Greater Lawrence on Friday night. (Eric Evans Photo)

ANDOVER – In football post-game analysis, the recap typically focuses on what was done right and what was done wrong, offensively and defensively. Often, special teams are overshadowed, receiving far less scrutiny, particularly when all goes well.

All went well for the North Reading football team last Friday night as they routed Greater Lawrence Tech, 44-17, to improve to 2-0 on the young season. And worthy of much of the credit for this convincing win was senior place-kicker Matthew Guidebeck, who was not only a perfect five-for-five from the PAT stripe, but his kickoff and punting proficiency directly resulted in points.

Early in the second quarter, for instance, a Greater Lawrence return man lost the handle on one of Guidebeck’s sky-high kicks, handing the ball back to North Reading in the red zone, which was soon converted. Minutes later, the Hornets reclaimed possession off yet another Guidebeck moon shot, which again handcuffed the return man and subsequently, led to a turnover and a North Reading score.

“He was such a weapon in this game,” said North Reading coach Ed Blum of Guidebeck, who is ten-for-ten in PATs in two games and also contributes in a defensive role. “Ever since he came in, he’s had this great kicking mindset and you’re seeing it in his attitude and his leg strength. We try to make special teams a difference-maker and it showed tonight.”

“It’s not something that’s looked at a lot,” said Guidebeck when asked about his kicking game. “During the off-season, I trained hard and my goal has been to get better every day.” 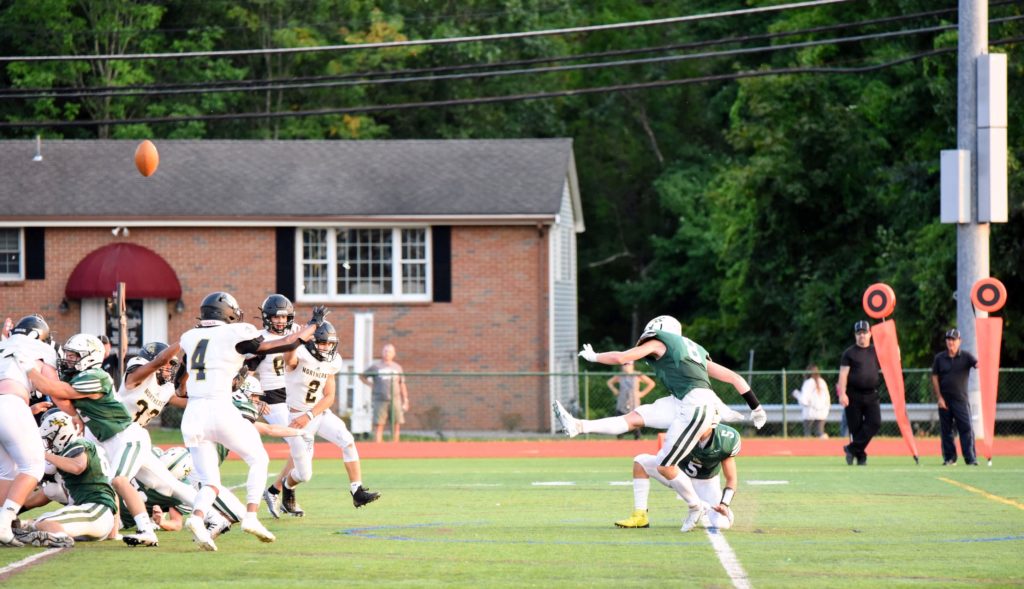 MATTHEW GUIDEBECK was 5-for-5 on PAT’s and controlled the field position battle with his punting and kick-offs in a win over Greater Lawrence on Friday night. (Eric Evans Photo)

Chris Sailer, whose firm offers professional kicking training says, “Matt’s punting is his current strength. He punts for great distance and his hang time is solid.

On the heels of a season-opening 28-6 loss to Wakefield, Greater Lawrence won the toss and deferred, handing the opening possession to North Reading. The Reggies’ staff would regret that decision as QB Alex Carucci was on the mark off the first snap, finding Will Batten for a 48-yard TD. Carucci missed on a 2-point try but 12 seconds into the contest, the Hornets were in front, 6-0.

Not to be denied, Greater Lawrence moved the ball effectively on their first offensive series, marching 43-yards on 11 plays. But the Reggies soon became mired in the red zone. They turned to Darien Calderon, who successfully booted a 30-yard field goal to halve the deficit. It would be the only points that Greater Lawrence would enjoy until late in the game.

North Reading reeled off five unanswered scores to climb into a comfortable 37-3 intermission lead. At the end of the first frame, Carucci combined with Batten again, from the 4. Following a touchdown saving 4th-down knockdown by Ryan McGuire, Craig Rubino ran back the ensuing punt 53-yards to make it 20-3. Two plays after a Guidebeck kickoff was fumbled, Batten was in from the 14. Guidebeck later added a 36-yard field goal and finally, before the Hornets took a well-deserved halftime respite, Carucci punched in a 1-yarder.

“From the outset, we’ve been preaching execution,” said Blum. “The offense is capable of making big plays and in turn, it motivates the defense. Credit to the players. The execution on those plays, the reads, and actually making the play just changes the tone and they feed off of it.”

Greater Lawrence came out of the break with renewed vigor and pieced together a 59-yard scoring drive that consumed half the third quarter. QB Isiah Suero polished it off, leaning in from the 1 to make it 37-9 after a missed PAT. Suero later added another rushing score, from the 5.

“He’s such a gamer,” said Blum of his senior QB, who has now thrown six TDs in two games. “He watches a lot of video, works his tail off in practice, and expects a lot of himself. It’s great when he can come out here and see all that hard work pay off and have some fun. We’re lucky to have him.”