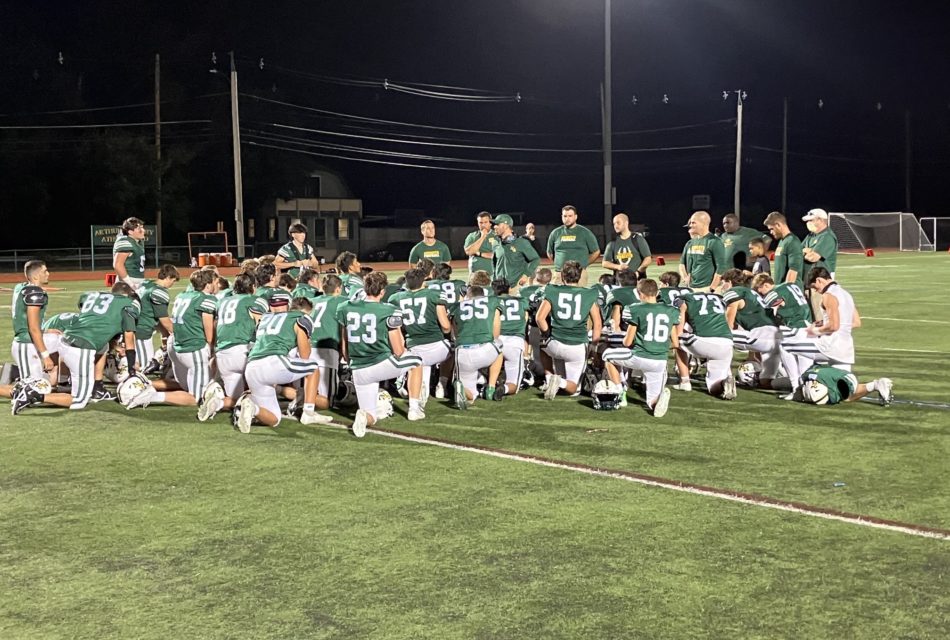 Senior QB Alex Carucci, on the first play of the game, stepped back in the pocket and lofted a deep pass to Craig Rubino, who had gained separation and made the go-ahead 66-yard TD look effortless. North Reading went on to defeat the Knights, 35-20, but as fifth-year head coach Ed Blum would say, it was anything but easy. His opponent pounded the Hornet defensive line and feasted on the run. In fact, the Knights threw only two passes in all.

“Offensively, that’s what Northeast lives on,” said Blum of his one-dimensional, run-only opponent. “They’re happy with three, four, or five yards a play. And obviously, they were able to break a few. It’s a tough offense to prepare for. Our defense was out there for 60 plays and against an offense like that, it can take a toll. Hats off to them – they play a very tough, physical brand of football.”

While Northeast tested the Hornet defense with long, grueling drives, for the most part between the twenties, the North Reading offense only needed 13 first half snaps to get the job done, reeling off 28 unanswered points.

Will Batten staked the Hornets to a 14-0 lead with a 9-yard TD rush midway through the first quarter. The junior tailback collected the ball and ran left behind the line until he found the edge for the score. Batten would account for four of his team’s five scores on the night, adding a 69-yard TD reception, a 2-yard plunge before the intermission, and as Northeast rallied late, a back-breaking 54-yard linkup with Carucci to seal it.

“He is a special player,” said Blum of Batten, who amassed 147 all-purpose yards on 8-rushes and a pair of catches. “He showed it last year. You saw it on the field today. He made some explosive plays. He has the means to make a defender or two miss and he has that rare ability of strength and breakaway speed. We’re very lucky to have him.” 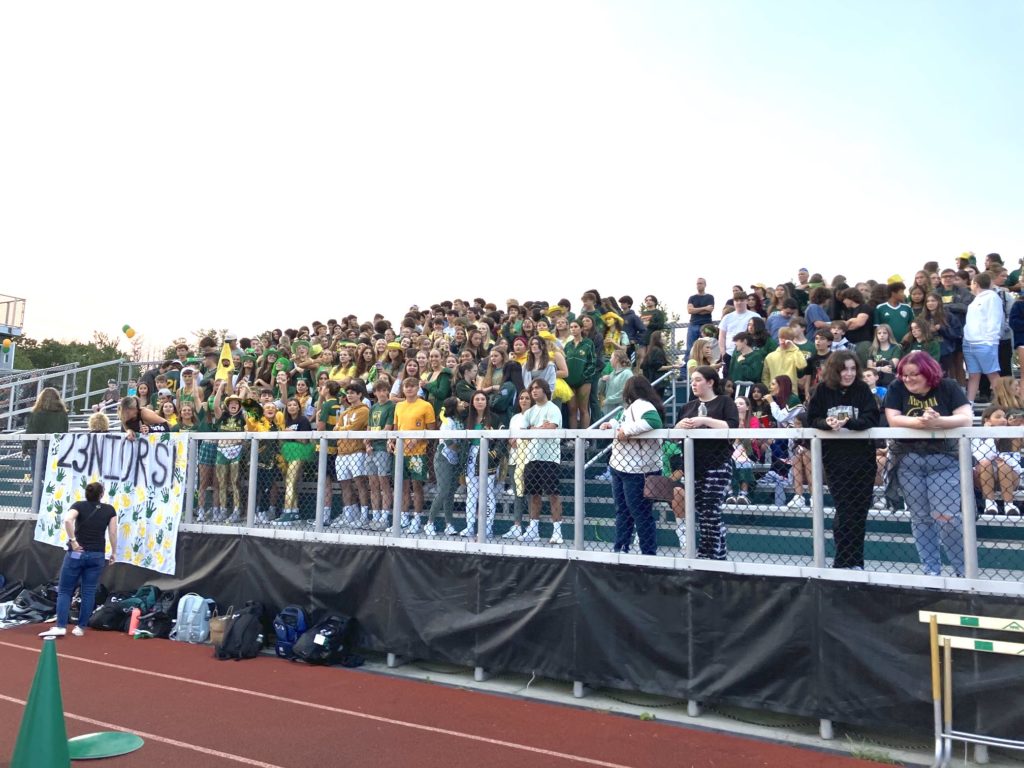 THE HORNET student section was rocking for the 2022 season opener. The next home game will be Friday, Sept. 23 against Pentucket at 6 p.m. (NRHS Athletics Photo)

The North Reading defense, led by linebackers Owen Delano and Sam Morelli, who recorded the first tackle of the season and many more after that, held the potent Northeast tandem of Lael Jean-Baptiste and Chris Zullo to 84 total yards on 28 first half carries combined. Of that total, ten tries were for no gain or lost yardage. But after the break, fatigue set in and the Knights began to splinter the Hornet defense.

On the first drive of the second half, Northeast pieced together an 11-play, 79-yard drive that culminated with a 5-yard TD rush from Joan Mendoza. QB CJ Moriconi failed on a 2-point rush but the Knights had finally broken into the scoring, 28-6.

Early in the fourth quarter, the North Reading faithful grew anxious as Northeast closed to within a pair of scores, 28-14, on a 4-yarder from Mike Sousa, capped with a successful Moriconi 2-point rush.

Nerves were taut on the North Reading sideline and in the stands behind them, more so because of a malfunctioning game clock. Save for an occasional update from the press box, neither team knew exactly how much time remained. All doubts were erased, however, when Carucci, who was 7 of 10 for 217-yards and 3 TDs, found Batten for a 54-yard score with approximately 3-minutes left. Matt Guidebeck was a perfect five-for-five from the PAT line.

“We got stopped a few times tonight but I thought the offense played a good game,” said Batten, who chalked up a second career four TD game. “I have to give credit to the offensive line. They were making the blocks and I just followed which is what our coaches have taught me.”

Northeast added a late 5-yard TD to round out the scoring.

“We have a lot of athletes and we tried to give them an opportunity to make plays in space,” said Blum, when asked about the return of his trademark quick strike offense. “There were some nice catches and individual efforts. Credit to our line and their blocking. A lot of guys got some valuable experience tonight that we didn’t expect. From here, we just have to keep building on our depth.”

North Reading will visit Greater Lawrence on Friday at 6 p.m.