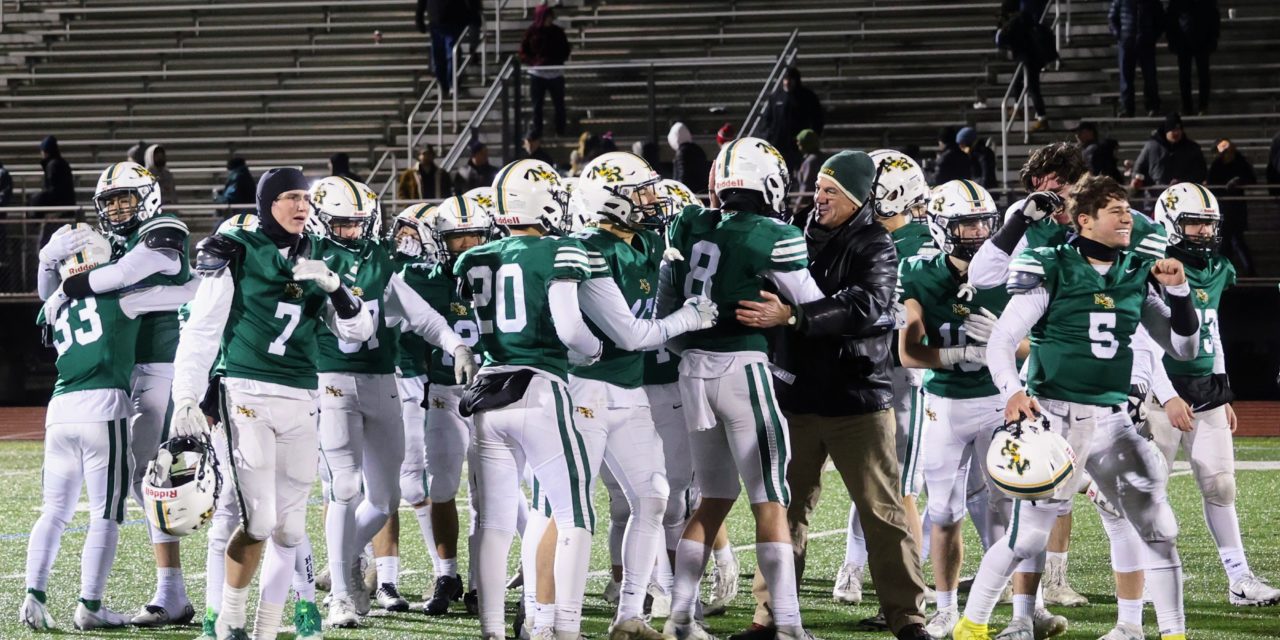 LYNN – It was one of those moments, frozen in time, which will not soon be forgotten by those fortunate enough to witness it. Some called the game an “instant classic,” while others described it as one of the most thrilling high school football finishes they had ever seen.

With the score knotted at 29-29 and only 6-seconds remaining in Friday night’s MIAA Division 5 semifinal clash between No. 2 North Reading and No. 7 Bishop Fenwick, the Hornets pinned their hopes on senior Matt Guidebeck. With a trip to a Super Bowl at stake, the snap from Teddy Suny was precise, the hold by Alex Carucci was textbook, and the sure-footed Guidebeck delivered a game-winning 39-yard field goal.

As the kick pierced the uprights, pandemonium erupted on the field and in the stands at the Lynn Manning Bowl, as players, coaches, and the North Reading faithful celebrated one of the most compelling wins in Hornet history.

It wasn’t just the kick that will be talked about for years to come but rather, the path that North Reading took to put Guidebeck in position for the try. Trailing 29-22 with 5:01 left, Bishop Fenwick pieced together a scoring drive to tie it, leaving the Hornets only 33-seconds to work with. Armed with three timeouts and a batch of proven sideline plays, Carucci ventured from his own 42, rushing 11-yards to the Crusaders 47. Without the services of favorite receiver Craig Rubino, who was injured in the second quarter, the wily QB turned to Ryan McGuire with an 11-yard throw followed with a 7-yarder to Brandon Eng. Carucci rushed again, to the 22, and quickly signaled for the third and final timeout, leaving 6 seconds. That was all the time Guidebeck needed to send the Hornets to Gillette Stadium for a second consecutive year. 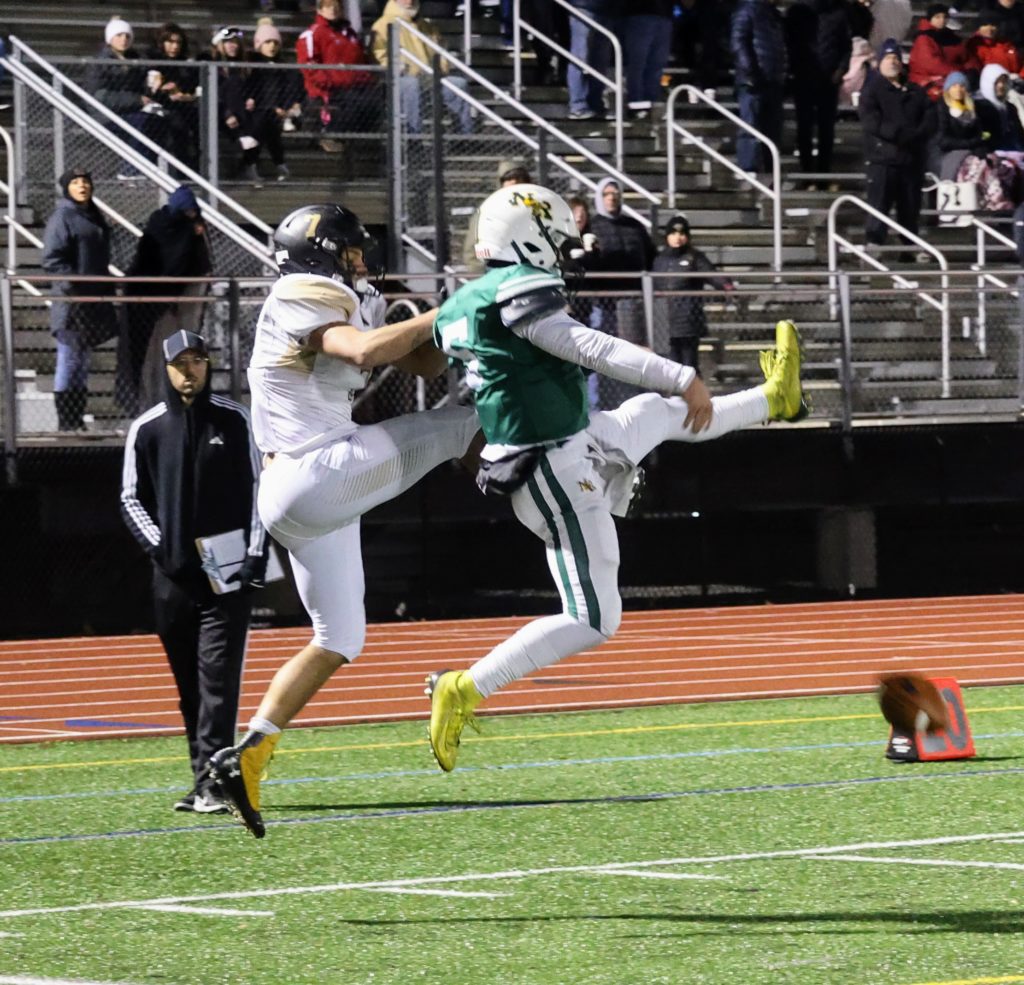 CORNERBACK OR QUARTERBACK? It depends on who has the ball for senior captain Alex Carucci who combined good defensive back play with two rushing touchdowns and a passing touchdown in NR’s state semifinal win over Bishop Fenwick on Friday night. (Eric Evans Photo)

“I had missed a few kicks in practice,” said the premier senior kicker. “This one went down to the wire. Coach Blum talks about taking a deep breath and executing. We did just that on this one play. It was a college-level operation. From the snap, to the hold – they’ve been great all year. And now we get to continue doing this.”

At the outset, Rubino lost the handle on the opening kickoff. Bishop Fenwick soon converted the early takeaway, with a 7-yard TD option pass from Luke Connolly to Alden Breen. North Reading answered without delay, however, on a Carucci 1-yarder after the Crusaders coughed up a punt on their own 1, recovered by McGuire.

The Hornets claimed a 14-7 lead with 8:12 remaining in the half when Rubino came up with a diving grab of a 17-yard Carucci pass in the end zone. The scoring drive, 75-yards in 13-plays, featured Eng with a clutch reception on a 4th-down gamble at midfield.

On the next Hornet possession, Rubino went to the turf awkwardly and failed to get up.

“My heart jumped out of my chest when I saw him go down,” said Carucci. “Rubino is the heart-and-soul of our offense. He’s such an incredible athlete. When he went down, I turned to our receivers and told them we all had to step up. There was no turning back.”

They were obviously listening to their quarterback’s sage advice. On the first Crusader series after Rubino was helped off the field, McGuire and Logan Scribner knocked down end zone throws from QB Bryce Leaman. Carucci, in his cornerback role, also got his hands on one to preserve the one score lead at the break.

“We’re not the deepest team,” said North Reading Coach Ed Blum. “Rubino is a tough kid to replace. Certain guys were given opportunities in certain roles that they hadn’t really practiced. But they were mentally prepared and they went out there and executed.” 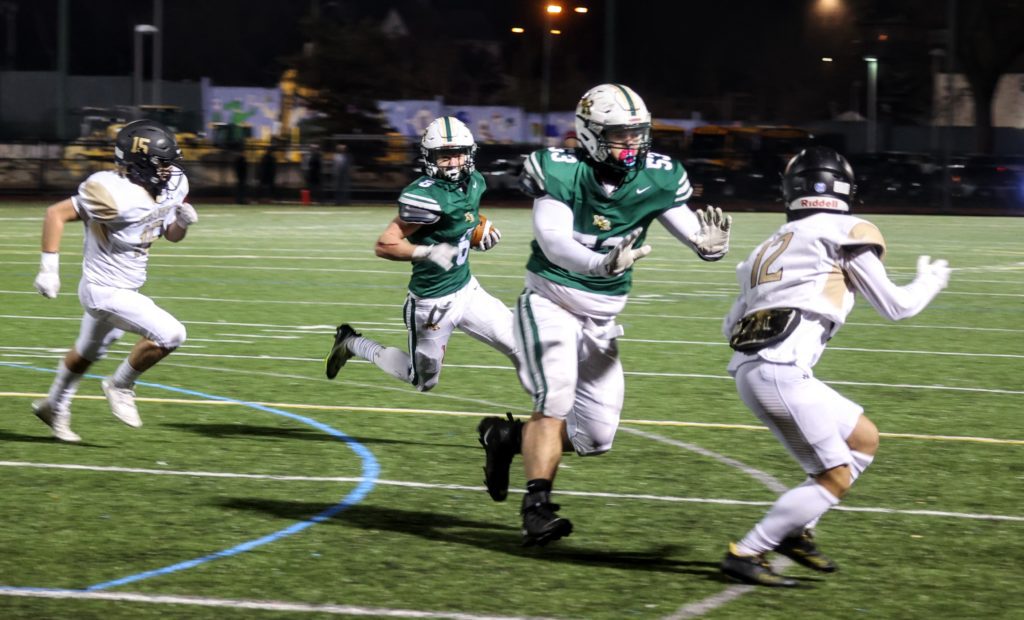 WILL BATTEN follows the blocking of Anthony Pino on NR’s 4th quarter TD run which reclaimed the lead in the state semifinals against Bishop Fenwick. (Eric Evans Photo)

Midway through the third quarter, Bishop Fenwick failed on a faked punt, handing the ball over on their 32. Four snaps later, Carucci powered in from the 2 for his second rushing TD of the night and a 21-7 lead.

Bishop Fenwick responded with a 13-play, 61-yard series, capped with a 7-yard TD run from Leaman, followed by a successful 2-pointer. The Crusaders soon polished off another long series with a Connolly 5-yarder, capturing a 22-21 lead with 7:29 left in the game.

Relatively quiet to this juncture, Will Batten put the Hornets back in front, 29-22, with an 11-yard TD followed with a 2-point rush.

In the final minutes, North Reading was flagged for a borderline pass interference call which extended a series and soon led to the game-tying Crusader score. Many thought overtime was in the cards but the Hornets had other plans.

“That was a heckova back-and-forth battle,” said Blum. “We knew it would come down to this. Credit to Matt Guidebeck and all of his off-season work. For him to come through for us was just awesome. You have to give credit to the offensive coordinators. The play calls and the players executing it. All it took was one negative play or one dropped pass. They just stepped up when it mattered most.”

“I think it’s a credit to our off-season work and the mental toughness we developed as a group; as a family,” said Carucci. “We faced a lot of adversity tonight and came through.”

On Friday, Dec. 2, North Reading will make the trek to Gillette Stadium to face No. 4 Shawsheen Valley Tech, which knocked off Dover-Sherborn in the semis, 21-14. Kickoff is set for 5:30 p.m. 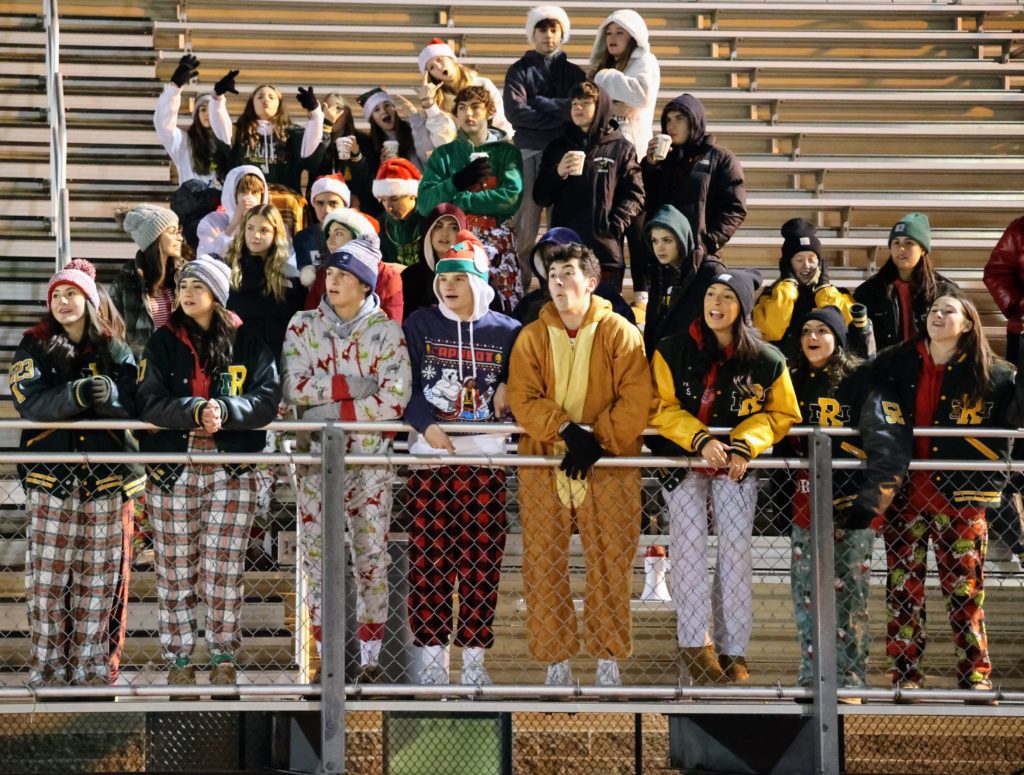