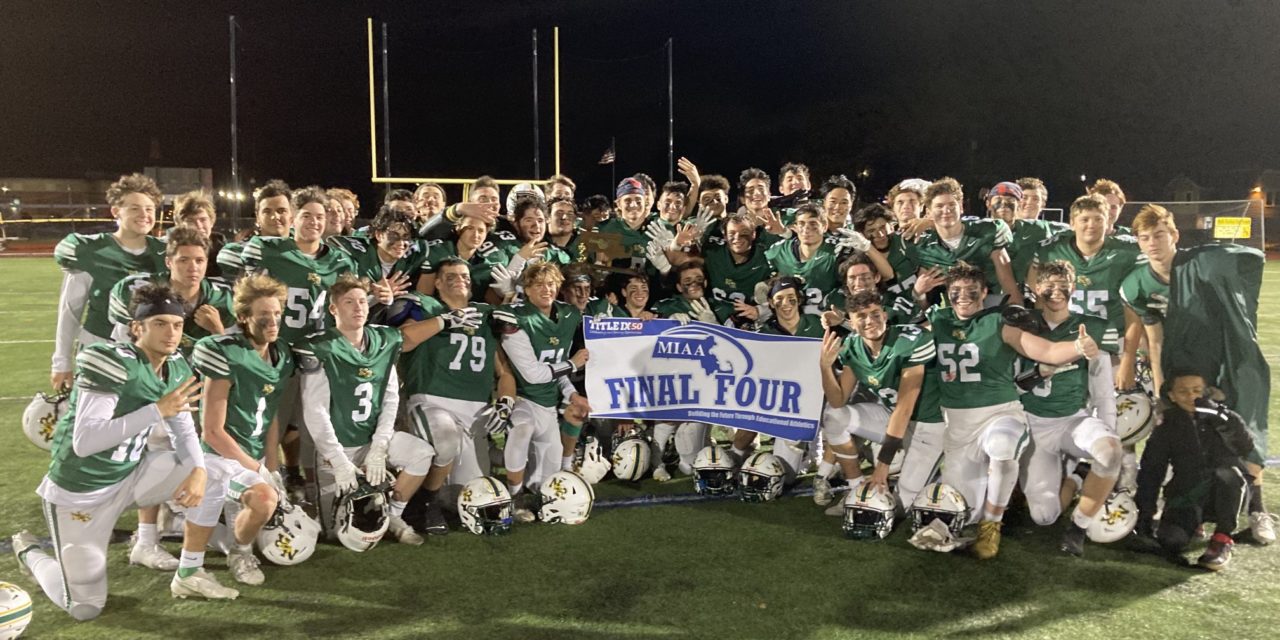 THE HORNETS punched their ticket to the Div. 5 Final Four with a 33-6 quarterfinal win over Norton in their last game at NRHS in the 2021 season. Number 1 North Reading plays No. 4 Pentucket in the semifinals at Manning Field in Lynn on Friday night at 5 p.m. (NRHS Athletics Photo)

NORTH READING — It stands to reason that the further a sports team progresses into the post-season, the more difficult the competition becomes. But week after week, North Reading Hornets football has convincingly refuted that concept, subduing each successive opponent with relative ease.

In the latest chapter, top-seed North Reading pounded the visiting No. 9 Norton Lancers, 33-6, and will next advance to the MIAA Division 5 semifinal to face a familiar foe, Pentucket.

With the decisive tournament win, North Reading improved to 9-1 overall, while Norton, which competes in the Tri-Valley League, fell to 7-3.

For the fourth time in 10 games, the Hornets opened with a TD on the first play from scrimmage. In this instance, wide receiver Ryan McCullough hauled in an outlet pass from QB Alex Carucci and did the rest, outpacing pursuit for a 57-yard romp and a 7-0 lead. The dramatic play, which the Hornet faithful have grown accustomed to, proved to be the game-winner.

“We understand that we need to start off early and set the tone with a big play,” said McCullough, who seemed to be fully recovered from a shoulder injury sustained mid-season. “We need to execute at such an efficient level early so that it puts our opponents back on their heels for the rest of the game.”

“We’re fortunate to have an offensive line that makes the holes and provides the protection that gives us the time for athletes like Ryan to make those plays,” said North Reading head coach Ed Blum, who sported a well-deserved grin as athletic director Dave Johnson unfurled and presented to the Hornets a banner reading, ‘MIAA Final Four’. 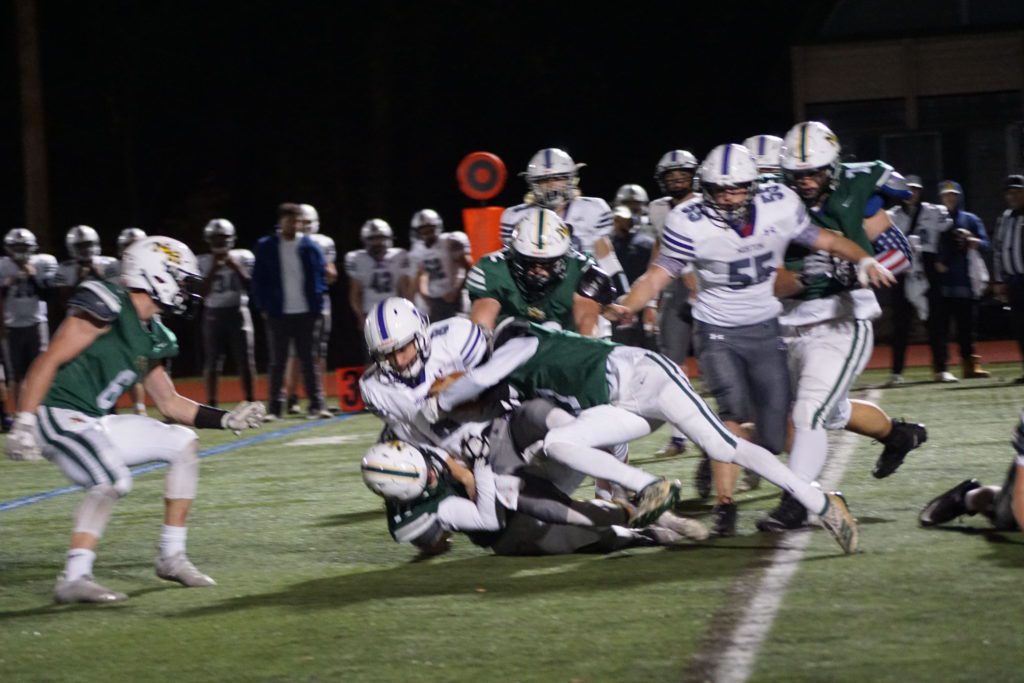 THE HORNET defense was swarming in the quarterfinal round, holding Norton to just six points. (Adele Vittozzi Photo)

Norton employed some trickery on their first possession, faking a punt and rushing for a fresh set of downs. Later in the series, on yet another 4th-down play, QB Nathan Tripolone coughed up the ball but managed to reclaim it far enough ahead to move the chains. The Lancers ran out of luck, however, turning the ball over on downs after Anthony Pino chased down Tripolone, foiling a throw earmarked for points.

Known for quick strike offense, the Hornets proved just as effective scoring conventionally by marching 83-yards on 10 plays to move in front, 13-0, with 4:12 left in the half. Will Batten, relatively quiet to this point, added his 19th TD of the season from the 2-yard-line.

With about a minute left in the half, a tremendous storm rolled in, featuring thunder, lightning, and heavy rainfall. Arthur J. Kenney Field was evacuated without hesitation. The teams retreated for the locker rooms while spectators beat feet to their cars.

It’s interesting to note that through the six games played last spring and the nine contested this fall, there has not been a drop of rain. Saturday night’s mid-game torrent more than made up for it.

As play resumed after a 45-minute delay, the wind picked up and the air precipitously cooled 15-degrees. But the Hornets didn’t lose a step, sending Batten 44-yards on the first play for a 19-0 lead with 46-seconds left in the second quarter.

With the extended weather break in mind, the officials and coaching staffs agreed to forgo an intermission and move immediately to third quarter play. Desperate to change the pattern, Norton resorted to a risky squib kick. North Reading defensive back Ryan McGuire, who picked off a pair in Week 7, secured the ball on the Lancer 33. The Hornets, to the chagrin of Blum, squandered the opportunity to add insurance, trending backwards on failed plays and a costly penalty. 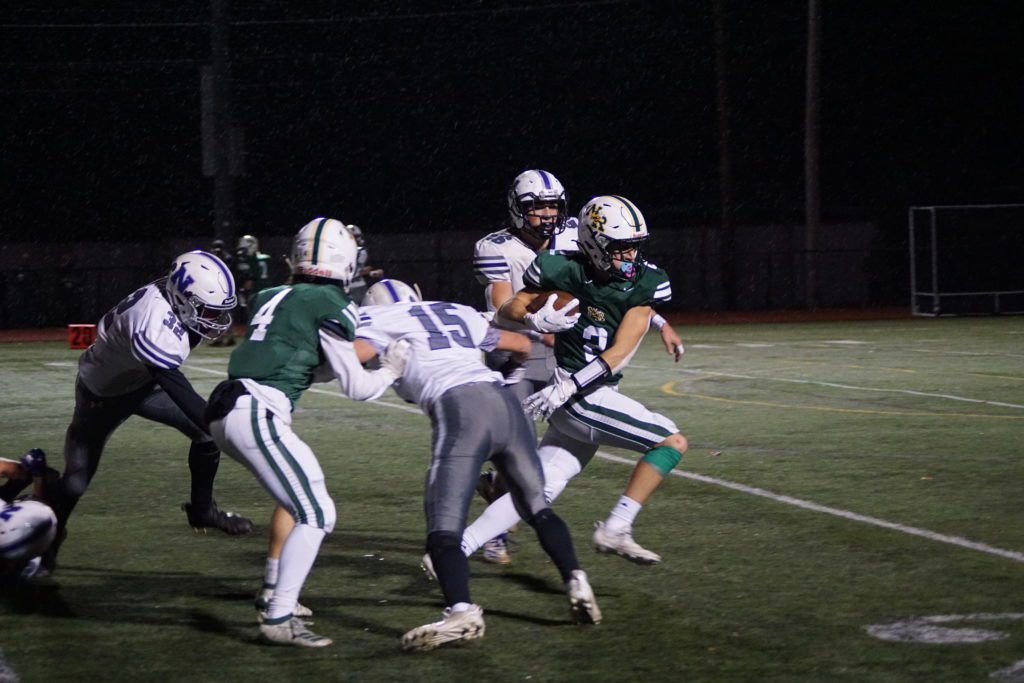 JUNIOR CRAIG RUBINO splits the Norton defense on Friday night at NRHS. Rubino had two touchdown catches to put the game out of reach in the second half. (Adele Vittozzi Photo)

“Certainly, this was not our cleanest game execution-wise from start to end,” said the coach. “We were able to put up points and get ahead, which makes it hard for our opponent to come back. But both offensively and defensively, there are a lot of things we need to clean up.”

North Reading put it away near the end of the third frame with back-to-back Carucci to Craig Rubino strikes. The first, from 31-yards, required the receiver to return for the ball and then take several backward steps across the goal line. And later, Rubino scored again on an 84-yard catch-and-run to front the Hornets, 33-0.

“Craig had a number of big catches tonight,” said Blum. “His awareness of where he is on the field, his vision and his instincts are all part of his natural ability. We’re fortunate to have him.”

With the clock winding down the stretch, Norton QB Tripolone punched in a 2-yarder to snap the game-long shutout.

“We have Pentucket coming up and we’ve played them earlier,” said Blum, referring to the Week 3 match-up claimed by North Reading, 20-0. “It’s going to take our best week of preparation, game-planning and execution practice to be ready. Pentucket has continued to find ways to win. They’re right there with us. It doesn’t matter how you get there, as long as you get there.”

North Reading and Pentucket will square off in the MIAA Division 5 semifinal at Manning Field in Lynn on Friday at 5 p.m. 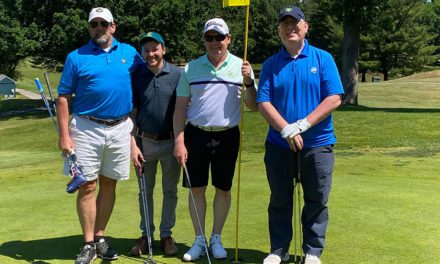 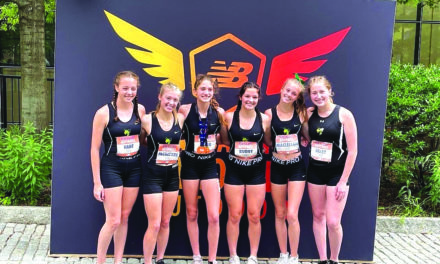