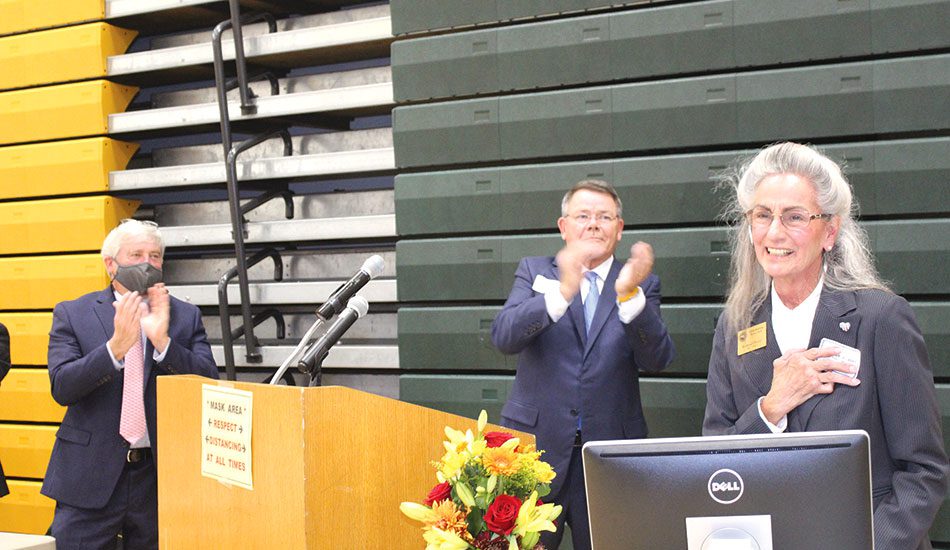 NORTH READING — The 140 voters who attended a physically distanced October Town Meeting in the gymnasium of NRHS were on a mission to get through all 16 articles in one session. The voters achieved that goal in about three and a half hours Monday night.

The meeting began on a bittersweet note as Town Moderator John Murphy recognized Town Clerk Barbara Stats for her 40 years of service to the town, including nearly 24 years in her current role.

As this would be her last Town Meeting, she was surprised, and a bit taken aback, when presented with a bouquet of flowers from Town Administrator Michael Gilleberto followed by a standing ovation from an appreciative audience of voters and town officials.

“Barbara, you’ve been an invaluable resource to me and the rest of the community, particularly relating to Town Meeting. Every board and committee seeks your advice and guidance,” Murphy said, adding that he had sought her guidance often in the nearly 18 years that he has been conducting Town Meetings. “Thank you, thank you, thank you for your service!”

Mrs. Stats thanked everyone, summing up her career as “an incredible journey.” She added, “It has been the most rewarding experience of my life, next to my family. I truly am honored to have sat in this position for so long and to help in any way that I could…I will miss it incredibly. I will miss all of the people here.” Her son, Fire Chief Don Stats Jr., was waiting in the wings to give his mom a hug. Then it was back to the business at hand.

Sewer in our future?

The most pressing issue at hand was the passage of Article 10 to appropriate $2,893,000 from proceeds of the sale of town-owned land (realized when the town paid the state $1 for the remaining J.T. Berry land and got a windfall of $19M after accepting the RFP for Pulte Homes for 450 units of 55+ housing in nine buildings) to be put toward the continuation of planning, designing, engineering and/or the permitting related to the potential construction of a wastewater collection and conveyance system along Rte. 28, Concord Street and the upper portion of North Street to Lowell Road, ending at the Pulte Homes complex on the Wilmington town line.

Gilleberto stated that after many decades of the town discussing the potential for providing sewer service in some sections of town, it is the Select Board’s belief that having public sewer available in the town’s commercial districts will promote economic development by making more land area usable and also allowing an increase in the density of that development in commercial or industrial areas.

Such a system would also make more multi-family housing construction along Main Street possible, which in theory will create the population density to support those new businesses. It will also promote public health and protect the environment better than the current use of septic systems in virtually all areas of town.

The 99-year water purchase lease the town entered with Andover in 2018 opened up the possibility of the town joining the Greater Lawrence Sanitary District (GLSD), which has the capacity to support the town’s needs. By contrast, the MWRA has not offered sewer service to new communities in years and the best offer they could provide to the town was sewer for Concord Street only.

The town has already spent $200,000 exploring its options to get to the GLSD. As a result of this study, the town has determined it will be best to limit the first phase of this option to the heavily commercial and industrial sections of town to reduce the impact to residential areas. But now a full analysis of the design and engineering necessary is needed.

The town currently consumes 1.6M gallons of water per day and the anticipated wastewater volume of the area proposed to be sewered is 320,000 gpd with a goal of accommodating up to 500,000 gpd to eventually enable the Martins Pond area and surrounding neighborhoods to hook into it, thereby improving the health of the pond in this environmentally sensitive area.

The proposed route would be from Rte. 28 to Rte. 125 up to Rte. 114 at Merrimack College. The urgency in the funding now is the opportunity offered by MassDOT for the town to piggyback on a project in the works along this route which could potentially reduce the cost of construction by $1M to $1.5M. But to take advantage of it the planning and design stage needs to begin this fall. If the town passed on this chance, due to the MassDOT’s policy restricting digging up access to newly paved roads, the next opportunity for the town to use this route would be pushed out to 2031. 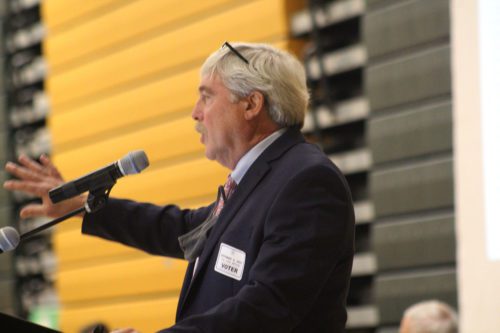 SELECT BOARD member Stephen O’Leary explains to voters the benefits of voting in favor of appropriating $2.89M for the planning, designing and engineering phase of a wastewater connection for the town with the Greater Lawrence Sanitary District. (Maureen Doherty Photo)

In the fall of 2022, when the study is completed, the Select Board would return to Town Meeting to seek the full funding, which will be over $100M. According to Select Board member Stephen O’Leary, who has served on the subcommittee that negotiated the 99-year water lease with Andover, if Town Meeting chooses to reject the plan next year, it will not change the results of the information gleaned from this design phase such as what the soil borings will reveal all along the route, so he believes the money will not be wasted.

“For the past 50 years, both current and previous Select Boards have sought an option to bring sewerage to the town but right now is the closest we have ever come to bringing this to fruition,” O’Leary said. He added “there is bipartisan support for (a federal) infrastructure bill” and by completing this design phase now the town will have a plan “almost shovel-ready to apply for grants at the federal and state level.”

“In the not too distant future we will have to address the public health issues brought about by septic systems… we are looking to design plans and permitting so we know exactly what it is going to cost us. This will provide us a means to grant you relief in taxes,” O’Leary said.

Giving a tip of the hat to State Rep. Brad Jones, who was seated in the audience, O’Leary explained that the town had “$19M dropped in our lap” by “a stroke of luck and a lot of hard work by Representative Jones.” Since then, the town has considered very conscientiously how to best spend these funds, he said, adding, “I urge you to support it.”

O’Leary added that the information gleaned from this design phase will be useful “for generations to come” even if the town decides not to go forward with the plan next year because they will have obtained information from real soil borings all along the route from Route 28 to Route 114 and eventually to the North Andover plant.

O’Leary also explained that pursuing this route will mean the town owns its own infrastructure along the route. The other options – such as cutting through downtown Andover – may be shorter but would be “far more costly” because it requires disturbing neighborhoods that had been torn up just a couple of years ago following the gas pipeline explosion. By linking up with another community, such as Andover, the town would also be “responsible for their operating costs” as well as its own, he added.

Mark Hall of 12 Upton Ave., supported the article. “I have lived here all my life and care about the town. We’ve talked to groups about redeveloping North Reading… you have got to have sewer before you can have anything else. This is the first step… it will never be what we want it to be if we do not get sewer.”

Tony Lore, 21 Strawberry Ln., did not support it due to the potential future cost, which he believes will be significant, especially for renters, condo owners and those living in over 55 developments. “If we have $2.9M to spend, I think a better use (for the money) is on senior housing or affordable housing,” Lore said.

CPC Chairman Warren Pearce said he had spent 15 years serving on the Wastewater Advisory Committee, which ended about eight years ago. He also installs septic systems as part of his construction business and commented that it is not only business properties that have a difficult time finding an appropriate place for their septic system needs; it impacts residential development as well. Pearce said if the town misses this opportunity now in the future residents will view it as the same short-sighted mistake made when the town had the chance to join a sewer district back in 1972 but Town Meeting passed it up.

When the vote was called, the motion was not unanimous, but it did carry.