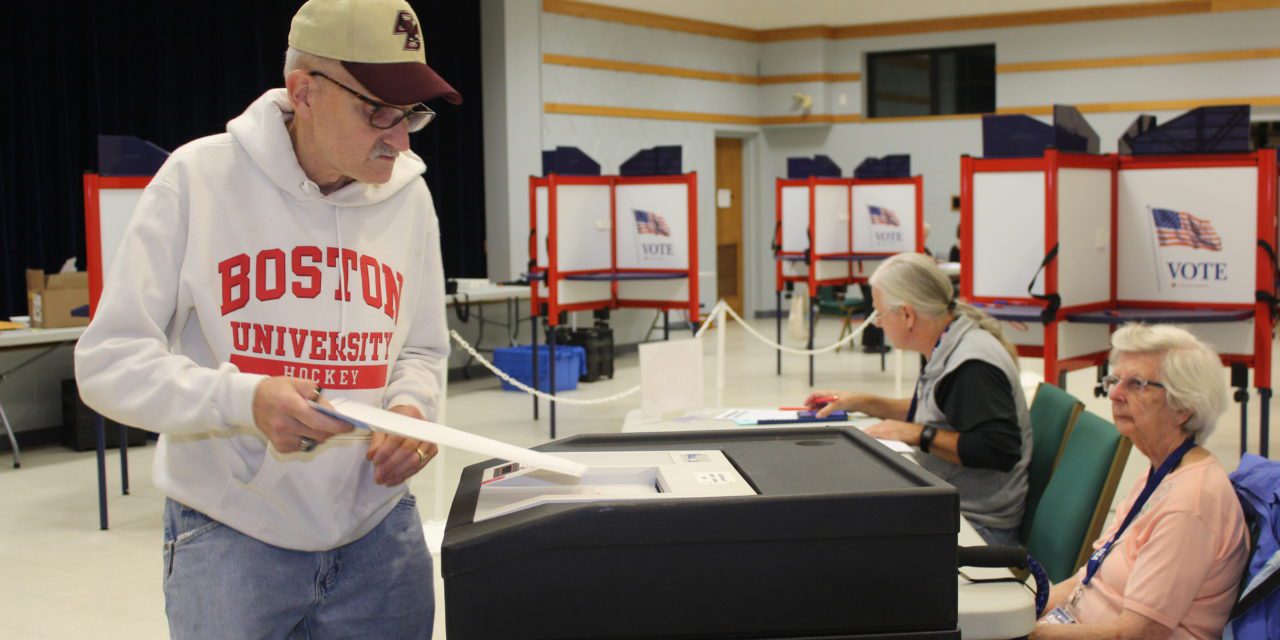 and SHNS reporter COLIN A. YOUNG

NORTH READING — The outcome of the State Primary in North Reading mirrored the results in the race for the top seat in commonwealth. Local voters indicated their preference in the November state election for former state Rep. Geoff Diehl over business executive and political newcomer Chris Doughty on the Republican ticket to face off against current Attorney General Maura Healey on the Democratic ticket, whose challenger, Sen. Sonia Rosa Chang-Diaz, had withdrawn from the race in June which was too late to have her name taken off the ballot.

North Reading Republican primary voters chose Diehl over Douty by a margin of 596 votes to 407 votes. On the North Reading Democratic primary ballot, Healey garnered 1,404 votes to Chang-Diaz’s 150 votes. The tallies in the North Reading state primary were listed as unofficial at press time on the Town Clerk’s website.

Healey, a Boston Democrat who has been the state’s attorney general of the last eight years, cleared the gubernatorial field after she entered the race in January and has been able to largely waltz to the doorway of the governor’s suite since Sen. Sonia Chang-Díaz ended her Democratic primary campaign in June.

The corner office is up for grabs by virtue of two-term Gov. Charlie Baker and Lt. Gov. Karyn Polito’s joint decision announced last December to not seek a third term for their popular Republican administration. Polito’s decision not to seek the governor’s office herself left no heir apparent to assume Baker’s mantle on the Republican side.

Had Baker run, he certainly would have faced headwinds from the growing chunk of the Mass. Republican Party that is aligned with former President Donald Trump. The party’s primary voters on Tuesday showed that they’re on board with the shift by nominating Diehl, a former state representative from Whitman who has emphasized his endorsement from Trump.

The Associated Press called the GOP primary for Diehl at 10 p.m. when he had about 56 percent of the votes counted to 44 percent for Wrentham businessman Chris Doughty, whose campaign focused on affordability issues and mostly eschewed federal political issues. Diehl said Tuesday night that his campaign would be the first to focus “specifically on we the people – our freedoms, our rights and our prosperity.”

Diehl’s “Blueprint for the Bay State” pledges to enact the tax reform proposals made by Baker, suspend the state gas tax whenever the pump price is above $3 per gallon, create a statewide “jobs boss” who would focus on attracting new companies to Massachusetts and growing existing companies, increase mental health care capacity, repeal MBTA zoning regulations, increase the presence of police officers in schools, and create a new state agency to monitor schools for the promotion of a political agenda. He also has vowed to re-hire state workers who were fired for refusing to comply with the state’s COVID-19 vaccination mandate.

“Maura Healey as governor would lead our state in the wrong direction, down a path of higher taxes and radical legislation. We don’t want that, right? Under her leadership, Massachusetts would be more expensive, more excessive and more restrictive,” Diehl said. “So when it comes to your rights, your freedoms, your wallet, your businesses, your kids’ education, I declare Maura Healey to be the people’s worst nightmare and I’m here to stop her from ever bringing her radical policies to the governor’s office.”

While Democrats had a couple of high-stakes and bruising statewide primaries this year, the gubernatorial ticket was the only real question to be decided Tuesday by statewide GOP voters and independents. But the GOP primary for lieutenant governor was too close to call a bit after 11:15 p.m. with Diehl’s preferred running mate Leah Allen, a former state representative from Danvers, leading former state Rep. Kate Campanale of Spencer 51.7 percent to 48.3 percent.

Once Healey’s place as the Democratic nominee for governor was cemented Tuesday night, she told supporters at a Dorchester union hall wedged between the Red Line and the Southeast Expressway that she’ll cut taxes, and fix roads, bridges and the MBTA. She also touted her bipartisan working relationship with Baker, whom she said, “has led with respect and worked with both parties” and cast herself as a politician in his mold.

“Unfortunately, Geoff Diehl and Chris Doughty will put us on a different path. They’ll bring Trumpism to Massachusetts, and they both already said they’ll support Donald Trump in 2024. I don’t know about you, but I am tired of the anger, the vitriol, and the division. That’s not who we are. That’s not what Massachusetts is all about,” Healey said before her Republican opponent became clear. “I want a different path. My path is one of optimism; working together with urgency and intention to get things done.”

Healey has said that her gubernatorial administration would put new leadership in charge of the MBTA, create a new child tax credit worth $600 per child for more than 700,000 families, set a target of net-zero emissions from state operations by 2030 and fully electrify public transportation by 2040, tackle “local zoning barriers” to build more housing, end state and local law enforcement involvement in federal immigration matters, and take a fresh look at the role of standardized testing in K-12 education.

In the Secretary of State race, incumbent William Galvin (1,206) easily beat out NAACP Boston Branch President and Civil Rights attorney Tanisha Sullivan (355) in what Galvin has said will be the last time he runs for the office.

In the State Auditor’s race, state Sen. Diana DiZigolio of Methuen (878) outvoted former state Transportation Secretary Christopher Dempsey (577). This was an open seat as Auditor Suzanne Bump decided not to run for re-election.

There were no candidates running for Democratic nomination for either the Massachusetts House of Representatives or State Senate in North Reading.

In the remaining contested race on the Republican ballot for lieutenant governor, North Reading voters endorsed former State Rep. Leah Allen (628) over former state Rep. Kate Campanale (307). The positions of governor and lieutenant governor are elected independent of each other in Massachusetts; Allen stated that she was aligned with Diehl while Campanale ran with Doughty.