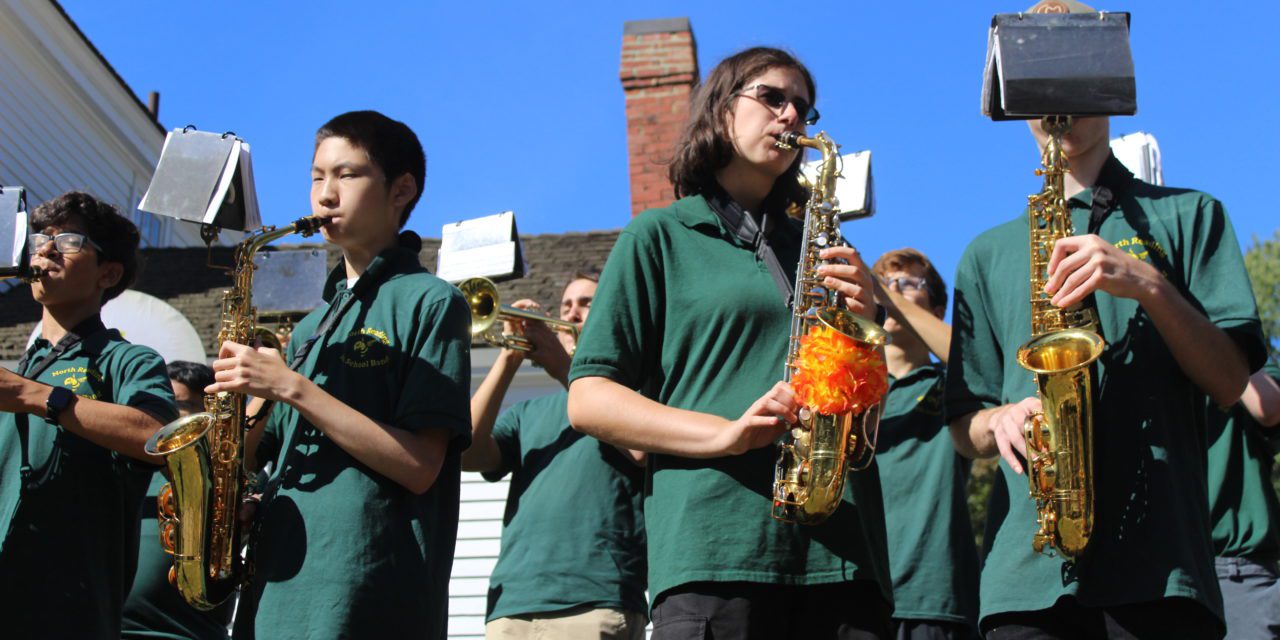 The MICCA Northeast District I competition at North Reading High School, 189 Park St., will feature nine area high school marching bands in the first judged show of the season plus an exhibition by the UMass Lowell marching band. That’s a lot of entertainment for $8 general admission and $5 for students and seniors. Tickets will be available at the gate, payable either by cash or card.

The first band performs at 1 p.m., preceded by a special performance of “The Star Spangled Banner” and other selections sung by North Reading High School’s internationally acclaimed a cappella group, NOTEorious.

“We are excited to bring this show back to our community for the second year in a row, already growing in size to host nine other local high schools. I am particularly excited to show off the hard work we put into our North Reading field show, ‘The Hive,’ especially in our brand new uniforms!” commented Band Director Ben Owens.

The nine high school bands scheduled to compete are: David Prouty, North Middlesex, Reading, Woburn, Andover, North Andover, Acton-Boxborough, Wakefield and the hosts, North Reading. The UMass Lowell marching band will perform in exhibition, which is sure to be a crowd-pleaser.

The order in which the bands will compete will be announced sometime this week. The judges were not known at press time. Awards are to be presented by NRHS Principal Anthony Loprete immediately after the competition.

Cheer on the Marching Hornets as they debut their new show, “The Hive,” in this first event of the competition season under the direction of senior Drum Major Angelina Palozzolo and Junior Drum Major Isabella Kim. Their show features five songs performed in three parts: The Green Hornet, Flight of the Bumble Bee, The Flower Duet, Emerson’s Piano Concerto No. 1, and Killer Queen. The band’s sharp new uniforms will surely enhance the visual elements of their performance.

The snack shack will be open during the competition as well, so be sure to bring your appetite.

The North Reading Music Boosters is a 501(c)(3) organization. Donations are used for a variety of musical enrichment activities in town and help defray other costs, such as the marching band uniform fund. Donations are gratefully accepted via the Boosters’ PayPal Giving account: https://www.paypal.com/us/fundraiser/charity/1285237.

For additional information on the MICCA show visit the show’s website at: https://nrmusic.weebly.com/micca.html or scan the QR code for tickets.