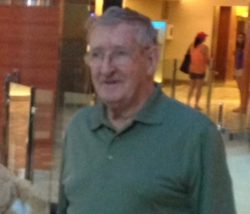 NORTH READING — Raymond MacLean, 85, of North Reading, passed away peacefully at his home of 60 years on August 15, 2022 after many years of declining health.

Raymond was born Sept 23, 1936 in Big Baddeck, Nova Scotia, Canada. He was the son of the late Caroline (MacLean) MacRae and John Gillis.

He is the widower of Edna Carol MacLean with whom he shared 48 years of marriage, seven children and 13 grandchildren together.

Raymond came to the U.S. in 1958 to find work and became a truck driver, working for many trucking companies over the years, He was a member of the Teamsters Union Local 25 and 49. He retired from Trans Gas in Lowell in 2001.

Raymond is survived also by his brother, Charlie MacLean of Baddeck, Nova Scotia as well as Gordon, Duncan and Alastair Gillis, Marilyn Gillis, Elinor MacDonald, Nancy Smith and Marjorie Soares, all of Canada, along with many nieces and nephews.

He was pre-deceased by his brothers, Murdock and John MacLean, as well as his sister, Elizabeth (Betty) Mac Intyre.

Relatives and friends are cordially invited to celebrate a graveside service for Raymond at the Riverside Cemetery, Elm Street, North Reading on Friday, August 19 at 11 a.m.

In lieu of flowers, please consider making a donation in Raymond’s memory to the MSPCA at Nevin’s Farm, 400 Broadway, Methuen, MA 01844.

Arrangements are in the care of the Cota Funeral Home, 335 Park St., North Reading. To leave an online condolence, please visit www.cotafuneralhomes.com.